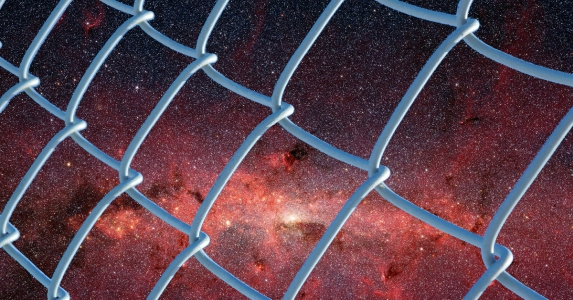 One hot summer night on a remote island on Kaligir 3, Raul Wexler was awakened by a terrible row. A twenty-three-year-old hotel steward, Raul couldn’t imagine what had made him the target of so much shouting. A recent arrival, he’d enjoyed a peaceful life so far: a steady paycheck, modest quarters and a chance to watch the idle rich play at a major resort.

But here was this violent commotion, complete with the chilling phrase “Sector Enforcement.” He threw a cloth robe over his slender frame and hurried to his front door before the shouters broke it down. A tall, dark officer in a crimson uniform glared at him from the threshold.

The rest of the conversation did not go well. Raul stood accused of illegal immigration. His uploaded credentials were sneered at.

“Sector court will decide that, Junior,” said the officer. “Put some pants on.”

Later, Raul would take comfort in the thought that he hadn’t broken down. But there were weeks of trouble ahead before he could be so objective. After a harsh interrogation, a humiliating physical and a stream of unprintable epithets, he was stripped down, flung into baggy prison garb and given his ritual phone call. Raul chose his Hotel Manager, but she claimed not to know his name.

Derisive laughter followed, after which Raul was shoved into a rude wire cell. Electrified wire, that is, as his heavyset guard pointed out with a smile.

Totally insane, Raul told himself. A hoarse voice broke in on his thoughts.

“Saw the look on your face,” said the voice.

Raul looked up at the plump humanoid who stared at him through purplish eyes. His cellmate, one of nineteen, was an Oglinoid, from way out past Andromeda Sector.

“Don’t look for answers,” the Oglinoid said. “It’s not supposed to make sense, not to us. Name’s Krelled.”

Raul, who’d grown up in the shelter of the Kuiper habitats, shuddered at the alien’s seemingly smashed-in face — then shuddered again when Krelled suggested they “help each other out.”

So went the first week: Not enough food, no heat and whatever sleep he could grab, after the others had dozed off. On the morning of the eighth day, Raul heard his name called by a bald guard, whose cranial scar flushed deep red whenever he’d been drinking.

“Got a visitor, Wexler,” the scarred man grunted. “Don’t let me hear no complaints if you plan on eating.”

The guard grabbed Raul’s forearm, dragged him down the detention center’s dank corridor and plopped him into a wobbly red plastic chair. Raul stared through a polyglass partition, while the guard kept watch three meters back.

Exhausted, Raul forced himself to sit up straight, if only to pretend that he hadn’t yet fallen so hard. Soon a well-dressed woman with bright red hair swept into the visitor’s area and perched on a chair on the opposite side of the glass.

“Don’t speak,” she said and waited for Raul to nod. “Fiona Marsh. Think of me as a human rights attorney. I’ve checked your paperwork and I already know you’re a hundred percent clean.”

“Relax,” she said. “It means nothing. I could appeal until my teeth fell out and you’d still be locked up tight as a government e-mag vault. So you have only one option. No, I mean it, don’t speak.”

Raul settled back in his chair, folded his arms across his narrow chest, and raised his eyebrows.

“Turns out there’s a loophole in the law,” said Fiona. “You probably haven’t heard, but there’s a war going on.”

The loophole was a chance for immediate discharge, in exchange for joining the Associated Fleet on the front lines of a major armed conflict. He’d have a job, his own quarters and the freedom to live anywhere he chose after the war.

Raul waved his pale hands over his skinny body and shrugged.

“No worries,” said Fiona. “Couple rounds of GenMod and you’ll be fit for anything they throw at you. Come on, it’s a good deal. Or you can wait until next month, when the social workers straggle in. They could get you a job scrubbing hydroponic beds on an ag-world. You know, the kind of work nobody wants to waste a five-million-credit android on. You might even meet a nice girl and start a family — until the bugs and the rodents get you.”

Raul stared at Fiona and tried to control his breathing, while she pulled a sleek metadigital tablet out of her shoulder bag. He rolled his eyes, shook his head and passed the ident chip in his forearm over the tablet’s glistening screen.

Two hours later, after a shower, a change of clothes and a hot meal, Raul Wexler, late of Kaligir 3, by way of the Kuiper habitats, boarded an advance-design lander for an uncertain future.