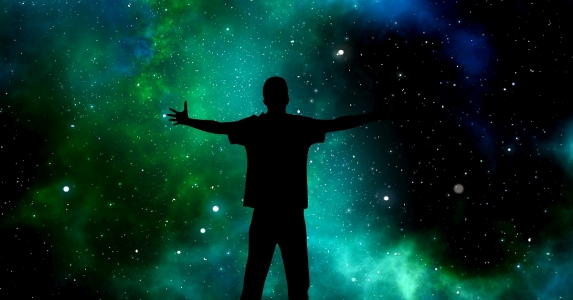 The look on Raul’s face made ‘Uncle Gilberto’ laugh.

“Don’t be so shocked,” said the alien impersonator.

“You said you wanted me to stop the Associated Fleet from ever starting the war,” said Raul, “by going back in Time. I was gonna ask you how but … if you know how, why do you need me?”

“We are the Dehortri. We live outside of Time,” Uncle Gilberto seemed to say. “We can’t alter its course. That’s up to you.”

“You’re gonna have to explain that,” said Raul.

“Every day,” said the alien, “your decisions affect the flow of Time. You not only affect the future, as you expect, but also the past.”

Raul’s visual field shifted. The simulated version of his childhood kitchen faded out and was replaced by a swirling mass of color, light and sound. Gradually, they resolved into what appeared to be a forest. Two paths led into it at the left and the right.

He couldn’t help noticing that the scene was an exact replica of the forests he’d walked through on Galen 4 — the last time he was genuinely happy.

The Dehortri, who was now reduced to a voice, still reminded Raul of his uncle.

“We haven’t had much time to study your mind,” he said. “Is the image confusing?”

“Where do these paths lead?” asked Raul.

“Where in Time would you most like to go?” asked the Dehortri.

“Back to … right after Roxanne dumped me,” he said. “Only I won’t take it so hard. I won’t give up on myself.”

“That’s the left path. Many consequences will flow from that decision,” said the alien voice. “You may not like all of them.”

“Can’t be worse than being chased by an army and a cult,” said Raul. “Where does the other path lead?”

The Dehortri described a scenario in which Raul was captured by the associated Fleet, reprogrammed and rose in the ranks to become an ideal Fleet Commander.

“Guess I’m going left,” said Raul. “Will I remember this?” “No,” said the voice. “And you will return to your original state. But the determination you feel will remain intact.”

“Still don’t know why I’ve been singled out like this,” said Raul.

“We intervene in many lives,” said the voice. “It is our function. But you must choose. We cannot keep both options open indefinitely.”

Raul gazed up at the forest, stared down at his shoes and waved his right hand in the direction the voice seemed to come from.

The moment he set foot on the path he felt lighter, younger — and sadder. He walked a slow shuffle down the path leading to his college dorm.

Can’t believe she said that, he thought. That night he got a call from his favorite uncle, Gilberto. In spite of himself, Raul couldn’t keep stop talking about Roxanne.

“Don’t let it rattle you,” said the kind voice at the other end of Raul’s comlink. “You don’t wanna know how break ups I had before I met your Aunt Rosario.”

Later that night, Raul walked out onto the campus and looked at the stars. For the first time in his life, he felt connected to the wider universe. What, he wondered, had changed? But it was too chilly out to stand around pondering — and besides, he still had a unit of Math to study.

“Combinatorics,” he said. “What a joke.”