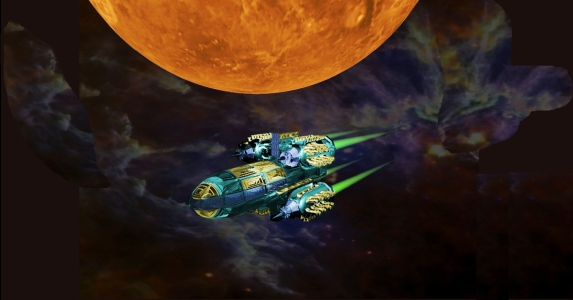 The lander that took Raul from the detention center on Kaligir 3 to a military transport about ten AU away wasn’t what he’d expected. Considering that Fiona Marsh had represented herself as a human rights attorney, he’d expected the ship to be a commercial or private vessel. Instead, it was unabashedly military, down to the insignia hovering over every bulkhead entrance.

Also unexpected was the way the crew addressed the woman he thought of as his lawyer.

“Welcome back, Colonel Marsh,” he heard more than one crew member say as they boarded. But Raul decided not to trouble himself with that. The lander was, after all, a big improvement over his detention center cage. No matter what followed, nothing could undercut his relief at having some alone time in his quarters.

Too bad his moment of peace was short-lived. Two hours into the flight, a young Ensign knocked on his door and escorted him to a small conference room. Her voice was fringed with ice.

“Wait here for the Colonel,” she said.

Raul watched as the slender young woman closed the conference room door behind her and wondered if he’d ever have a shot at a normal life again. Here he’d just escaped the narrow social confines of the Kuiper belt habitats — only to fall under the rigorous discipline of the Associated Fleet. Worse, by the time the GenMod team was finished with him, it wasn’t clear that “Raul” would even exist anymore.

Fiona’s arrival a few minutes later in full-dress uniform did nothing to dispel his dark mood.

“Craters, who died?” she asked. “Looks like you just left a funeral. Now come on, you have to admit this is better than your cage.”

“I liked the Hotel,” said Raul.

“Really?” asked Fiona. “Funny how little your manager liked you, once you landed in trouble. That’s the difference. The Fleet will never desert you. But we can debate that later if you want. I need to run down a few facts for you, so you know where you stand. First off, if you were hoping for combat duty, I have to disappoint you.”

Apparently, preliminary scans by the lander’s AI had confirmed that the genome remapping required to make Raul “battle-ready” was too extensive.

“You’d never survive it at the standard rate,” said Fiona, “and if we took it slow, the war would be over before you could start basic training. Lucky for you, there’s a Plan B.”

Raul tried not to think what would’ve happened to him in the absence of a Plan B.

“Turns out you earned an excellent mental rating,” said Fiona. “So how you ended up folding towels at a resort hotel is beyond me. But that’s over. From now on, you’ll live up to your potential.”

Raul nodded. But why did the reassuring ring of her words also make his stomach knot up like a wet rope?

Over the next few days, Raul was subjected to a continuous round of aptitude tests, psychological interviews, imaging scans and drug trials. The latter included two or three sessions with mild hallucinogens, designed to evaluate the structure of his mind.

Or were the doctors merely sadists? Raul banished that thought by concluding his only way forward was with hope. Besides, it didn’t seem logical that the Associated Fleet would waste its resources on pointless torture. At the same time, he realized, there wasn’t much logic in anything that had happened in the last three weeks.

Regardless, the day came when he was sitting across from the ship’s GenMod Director, Lieutenant Colonel Gregor Roche.

“I prefer to meet the candidate before each procedure,” he said. “Tell me about yourself. What do you want from your remapping?”

Despite his youth and his isolated upbringing, Raul knew enough not to blurt out the truth. For in his heart of hearts, all he wanted was another day like the day before his life was turned upside down.

“Wanna be useful,” he said, “and make a difference. Can you make me smart enough for that?”

Lieutenant Colonel Roche sat back in his chair and smiled.

“You’re so full of it,” he said. “Nobody your age wants anything of the kind. If I believed you, I’d have to label you a dangerous sociopath and push you out the nearest airlock. Try again. “

Raul’s eyes misted over, as he contemplated the violent world he’d stepped into.

“Wanna be smart enough so the Colonel’s assistant won’t sneer at me,” he said.

Yet at the end of their interview, as the jaded military man explained the espionage role the Fleet had in mind for him, Raul wondered if the “where” in question was a place he could ever inhabit with a clear conscience.