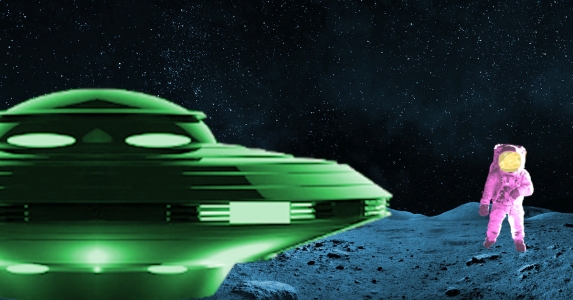 In his haste to reach the Kuiper habitats, Raul had made a crucial miscalculation. Because his tiny escape pad was intended to be no more than a high-tech lifeboat, it had limited speed and maneuverability and was useful for short distances only.

But the military transport that he’d just escaped had come to rest at the far edge of the habitats’ sensor range — to preserve its disguise as a commercial starliner. So while the Kuiper habitats were within range for a standard-issue military lander, they were too far away for Raul’s nearly circular craft.

In the silence that followed, Raul fought hard not to open the escape pod’s hatch and resolve his problem the easy way. Yet the thought of someday getting revenge on Section Leader Hazelton, Fiona Marsh, and the Interstellar Immigration Commission was just enough to sustain him. When the AI finally spoke, Raul felt as if he were hearing the voice of Destiny.

“Asteroid 0/138-67 is within range,” it said. “The observatory maintained by the Slingharen government has life support compatible with humanoid survival protocols. Warning. Immediate departure required to avoid premature oxygen depletion.”

With no other option, Raul ordered the AI to change course and started to work out a believable rationale for his visit. It wouldn’t be easy. The Slingharens, a species whose evolutionary ancestors had resembled terrestrial rodents, were a savvy bunch.

Their accomplishments in astronomy were legendary, which was why more than half of all human observatories were now designed, built and maintained by this curiously shy and modest species. Try to pay a Slingharen a compliment and you’d come away feeling that their brilliant idea had been all yours.

Though it had never been confirmed, rumor had it that these stubby, good natured beings were telepathic and could to bend anyone to their will. As his pod touched down on the steel gray, ovoid landing pad at Asteroid 0/138-67, he had to hope he’d concocted a convincing “backstory.”

“Special Agent Wexler of Intel Corps,” he said over the escape pod’s com system. “We have reports of a stealth craft operating in this area. Request permission to examine your latest scans.”

Because both the pod and his pressure suit had already transmitted his personal data, Raul made no effort to conceal his identity. The moment he exited his pod he was greeted by Associate Astronomer Gher Prelodra. Though the roughly pear-shaped being appeared youthful, he was in his mid-fifties relative to a species-average lifespan of over one hundred-twenty-five years.

“Impressive,” said Gher. “Your neural implants are a work of art.”

“You look startled,” said Gher. “But, isn’t it obvious that your implants give you a distinctive emag profile? Our sensors picked it up right away.”

“Sorry,” said Raul. “I don’t have a lot of off-world experience. Thought I’m pretty sure that EarthGov sensors aren’t so fine-tuned.”

Gher’s mouth, hidden as it was by his furry, outsized snout, appeared to smile.

“Yes,” he said. “We rely heavily on technology. Evolution hasn’t been kind to our eyesight. For example, based on your blood pressure, heart rate and adrenaline levels, it’s clear that you’re lying through your omnivore-adapted teeth. Why don’t you tell me what really brings you here?”

Raul’s augmented brain went into overdrive, until it concluded, logically, that there was no way to brazen it out. He hung his head.

“Running for my life,” he said.

“There,” said Gher. “The truth is so much simpler. And if it’s the Associated Fleet you’re running from, you’ll find many allies here. Come in. If nothing else, you can help us with our calculations, no?”

Raul blinked back a tear as he followed Gher’s toward the observatory’s entrance. The Slingheren’s own pressure suit, Raul noticed, was much like his own, though with slight differences that had nothing to do with their relative sizes.

Clear of the airlock, they both removed their helmets. Once Raul’s eyes adjusted to the yellowish cast of the observatory lighting system he could see it was a complex array of rounded archways. At various points, he could make out signage, on which wiry characters appeared. Raul smiled to himself at the thought that, just maybe, the Slingheren’s ancestors had written their first words with a set of sharp claws.

With the flick of a stubby finger, Gher signaled the nearest maglev lift. The two strangers rode up several levels in silence. When the lift’s doors whooshed open, Raul was greeted by a pair of furry astronomers, decked out in coffee-colored, floor length lab coats.