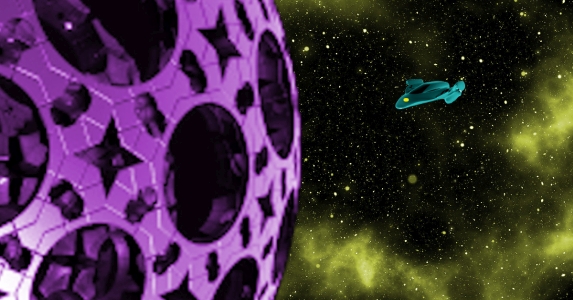 By now, Raul’s reconnaissance vessel had taken him light years from the Slingharen’s asteroid observatory. That would have made him feel safe, were it not for one nagging doubt. The same cortical implants that had twice helped him escape, most likely emitted trackable signals.

“Any sign of pursuit?” he asked his ship’s AI.

“Two automated probes approaching at a distance of one million kilometers,” said the AI.

As he feared, they were one each from the Slingharen’s and the Associated Fleet.

“Time to destination?” he asked.

As if in answer, a huge sphere appeared on his main view screen, apparently out of nowhere.

“Tell me that planet didn’t just transmat there,” said Raul.

“Mode of arrival unknown,” said the AI. “However, a recent energy surge in this vicinity suggests the suspension of a light cancelling field.”

Raul asked to see the data himself. His brow furrowed.

“An opening,” said the AI. “It appears you are being invited in. Correction. This vessel is being towed.”

Raul looked at the image on his screen and tried to locate the massive ship’s computer system with his implants. Perspiration dripped from his forehead, but the sphere’s inner workings were completely inaccessible. A calm, female voice greeted him through his comsystem.

“Relax,” said the voice. “We detected your pursuers and decided to shorten your trip.”

Raul shrugged. Whatever the sphere’s motives, his reconnaissance ship was already partway inside. Soon, he was completely enveloped in darkness, until a soothing pale blue light suffused his command console and he became immersed in it from head to toe.

“Don’t be afraid,” said the voice. “This is simply an anti-contaminant.”

“And I’m an infection?” asked Raul.

But there was no reply. For the next half hour, his only companion was a slight hum coming from outside his ship — until blue light shut off abruptly.

“Process complete,” said the voice. “You may disembark.”

Hands trembling, Raul entered his ship’s narrow airlock and, when the ready lights flashed, opened its door into the sphere’s misty interior. Yet before Raul could blink twice, the mist cleared — to reveal the streets of an alien city.

“Holography?” he asked. “Or another world?”

“That sounds like a line from a poem,” said the voice. This time, however, the voice was associated with a dark brown gynoid dressed in robes of a slate gray, woven material, topped by a silky shawl in overlapping shades of blue. Her face, Raul was disturbed to see, was as motionless as any statue. “For the record, this is not another world.” she said. “The sphere’s interior is, however, a-dimensional and capable of containing one. Walk with me now. I’ll show you to comfortable quarters.”

“Wait,” said Raul. “Can I ask … why me? There must be trillions of people who get caught up in politics.”

“Interesting question,” said the gynoid. “You will have to ask my makers. My name is Hantranex and, as the human expression goes, I just work here. Please.”

Raul watched as she turned on the heels of her silvery shoes and walked along a polished sidewalk. As he hurried after Hantranex, he caught fleeting glimpses of the city’s graceful overpasses, soaring, multifaceted towers, sleek hover cars and a population that put the “cosmos” back into cosmopolitan.

“Does this city have a name?” he asked.

“Why don’t we call it ‘Raulville,’ for now?” asked Hantranex. “You see, it’s mostly a construct made out of your expectations for an ‘alien world.’ We want you to feel at home here.”

Though Raul could think of dozens of other scenarios he might have found more welcoming, the sense of peace he felt was undeniable. Besides, there was so much that intrigued him that he was actually disappointed when Hantranex stopped in front of a graceful sandstone townhouse.

“Step inside,” she said. “One of the Makers is waiting for you.”

Raul’s stomach churned as he approached the building’s cubistic façade and turned its strange geometric door latch. The door opened into a small kitchen, nearly identical to the one he’d grown up with in the Kuiper habitats. Parked at the kitchen table, peeling potatoes, was Raul’s favorite uncle, Gilberto.

The older man looked up from his peeler and smiled.

“Only in the sense that we are all one,” he said. “But I’m not being fair. I should explain why we planted the hypnotic suggestion that led you here. Please, sit.”

Raul took the chair opposite “Gilberto” and, for the next half hour, tried to wrap his mind around the alien’s astonishing request.