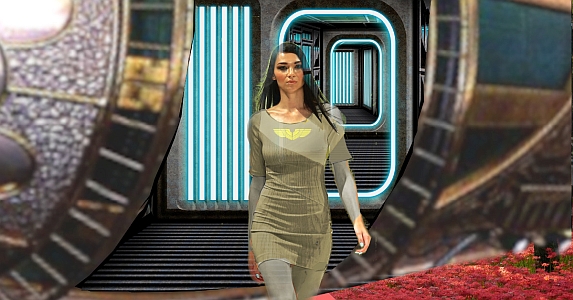 In the following week, Andrelex watched as a succession of human landers came and went from the city park where a mysterious ship had materialized without warning. Mysterious, that is, to the humans. Andrelex was on to the joke and, as he sipped his morning tea about three days into the human “investigation,” his offworld confederates were eyeing the scene with amused smiles.

Crowded around a large view screen on a distant planet were Galinton Preznoli and Harkinor Drantas, military attachés to the Jaljensian government. Members of a species of sentient crustacean, their eyestalks weaved back and forth. So far, their plan was working.

“You have to admit,” said Galinton, ‘the humans are thorough.”

“Yes, Lieutenant,” he said. “A sad, futile spectacle. But that’s what makes it so amusing.”

“Agreed, Sir,” said Harkinor. “It was a brilliant idea to hack into the humans’ research facilities and discover their technical ‘future.’”

“Oh, that’s not all,” said Galinton. “We also studied their literature. Did you know these ape-men have produced fictional accounts of their own future for hundreds of cycles. It’s as if they’d rather inhabit an imagined world than a real one.”

“Idiots,” said Harkinor. “What could be more fascinating than reality?”

“The point is, we’ve created a ship that mimics both sets of human expectations,” said Galinton, “the real and the fantastical. You’ll see what I mean when we release the gynoid.”

To Harkinor’s puzzled expression, Galinton replied that, in just a few moments, a gynoid would emerge from the seemingly impenetrable ship and confront the humans. It had been built to speak and move exactly like a human, but with certain extrapolations added by the Jaljensian linguistics team and literary scholars.

“The gynoid will convince the humans that it has arrived from their future with a warning,” said Galinton.

“We hope to scare the humans away, then?” asked Harkinor.

“Exactly,” said his superior. “We’ll get those monsters out of our sphere of influence without firing a shot or alarming the Interstellar Consortium. After all, the humans will be leaving voluntarily.”

“Ha!” said Galinton. “They were so fed up with human arrogance they begged us to intervene. Once this is over, all bets are off. Their status in our empire will be determined by the Enlightened One, praise be her name.”

The two crustaceans watched as the drama set in motion by their government began to play out. At the first sign of activity, the humans closed ranks and those in the military drew weapons. The tension mounted as a red, corrugated ramp descended from the ship and a gynoid of astonishing beauty stepped down to ground level and paused at the ramp’s edge, where the protective emag field, generated by the massive ship, ended. By all appearances, she was a young woman in her late twenties, with flowing, deep black hair.

Her radiant, green eyes scanned the crowd of humans as she extended her arms, with her palms outward. She wore a variant of the human military uniform yet with subtle differences in color and style. Her voice was resonant, like that of a trained singer, though she sounded as natural as “the girl next door.”

“My revered ancestors,” she said. “It is a pleasure to meet you. I apologize for the delay in contacting you, but we had to ensure that none of the pathogens we might have brought from the future would escape into Karula.”

Commander Jenkins stepped forward with his particle rifle lowered, but in the ready position.

“OK, Miss, you’ve had your fun,” he said, “Go tell PsychOps we passed the test. You pulled your little stunt and none of us broke training. You got me?”

The gynoid laughed — a sound as melodious as any earthly birdsong.

“Commander Jenkins,” she said. “Put down your weapon. There is no need to fear. I am Commander Alison Banes of the 2057th space squadron. I am here to give you a bit of advice.”

“Two hundred and fifteen cycles into your future,” said the gynoid. “And I am from twenty cycles further on. Now, please, we have much to discuss, and there is only a limited window in which to effect change, if humanity is to avoid disaster.”