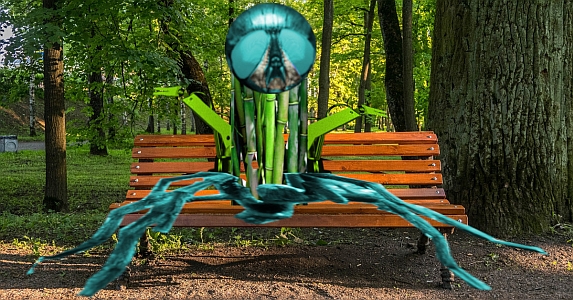 Though the Kalurans were helpless under the strict rule of the Jaljensians, a small community of astronomers and other scientists had survived the invasion. They tracked the invaders’ movements throughout the galaxy and reported their findings to Andrelex — who had become the Jaljensian liaison to the defeated Kaluran government.

Most of their reports had been depressingly routine. The warlike crustaceans had crushed world after world with overwhelming military force across several dozen ferocious space battles. One by one, Kalura’s neighboring worlds had fallen under Jaljensian rule. They seemed invincible.

Yet on a late afternoon, a good six months after his world had lost its independence, Andrelex received an excited comlink call while strolling the small park behind his office building. It was from Prelinz Drabhar, a breathless operative at the state observatory.

“Rolfant Andrelex!”! she said. “This morning we spotted a new type of starship emerging from fold near the Chalinoor system.”.

“Perhaps the Jaljensians have rolled out a new class of battle cruiser,”, said Andrelex, ’”That’s what any military would do.”.

“But Rolfant,”, said Prelinz, “these ships operate on a completely different principle than anything the Jaljensians have — and their pilots are definitely not crustaceans.”.

“Wish it were that simple.”. said Prelinz. “Whoever these … beings … are, sensors indicate they are a hybrid of organic and machine functionality.”.

Rumors of such a species had circulated for centuries, but mostly in holovids and children’s stories. In fact, in one Kaluran religion, the arrival of biomechanoids was said to signal the End of Days.

Let’s not go crazy over this just yet, he told himself.

“Any communication with these newcomers?” he asked.

What followed was Prelinz’ rambling account of the space battle that she and her colleagues at Kalura’s main observatory had witnessed. In a stunning display of tactics and, to be honest, brute force, an entire Jaljensian fighter squadron had been decimated within a few minutes. The attacks apparently had been uniquely merciless. Instead of merely destroying Jaljensian ships, the newcomers had actually dissolved their ships around them. Their crews floated helpless in the inky darkness, until the rigors of space finished it off.

“Any idea who led the attack?” asked Andrelex.

“Their ships are blank,’ said Prelinz. “We didn’t even find a scratch on their hulls, if you can believe that.”.

“Tell me what I shouldn’t believe,”, said the Kaluran. “I thought the humans were a menace.”.

Out of the corner of his red, reptilian eye, Andrelex noticed a strange blurring of the air next to him. Within seconds, a tall, spindly being materialized in front of him. It looked like a cross between a wispy plant and an industrial robot. Yet through the Kaluran’s embedded translation filters, the creature’s voice sounded seductively female.

“Your time of trouble is at an end,”, she said. “I am Ambassador Cahldriclan of the Lorgentirid Collective. I am hear to negotiate a settlement as payment for your deliverance from the Jaljensian mongrels.”.

“You’re assuming we want to be delivered,”, said Andrelex.

“Is there any question of that?” asked the stranger.

“The question,”, said Andrelex, “is ‘delivered into what?’ We’ve had our fill of rescuers, Ambassador.”.

The tall biomechanoid stared at him and blinked a pair of large blue eyes that sat atop her roughly cylindrical head.

“The alternative to rescue is conquest,”, said Cahldriclan. “May I assume you prefer the former?”

“Very astute,”, he said. “Not to sound ungrateful, but why do you care?”

“The Jaljensians violated our sacred space,”, said the biomechanoid. “They must be punished.”.

But as Andrelex explained, their soon-to-be-defeated masters had taken over every aspect of Kaluran society. Without them, the Kaluran homeworld would be thrown into chaos.

“A simple remedy is at hand,”, said Cahldriclan. “If you will allow us to repair your world.”.

“Again, I’m grateful for the thought,”, said Andrelex. “But why?”

His eyes widened as his visitor tapped her forehead and produced a vivid holovid of microscopic structures.

“This is a simulation of the Lorgentirid genome,”, she said. “As you can see, a few inherent weaknesses have infiltrated our systems over the eons.”.

“I’ll … have to take your word for that,”, said Andrelex. “But how can we help you with your genome?”

“We require a source of fresh genetic material,”, said the biomechanoid. “You will assist us.”.

The Kaluran’s mind reeled. No matter how he interpreted her last sentence, a series of unpleasant images crowded his mind.