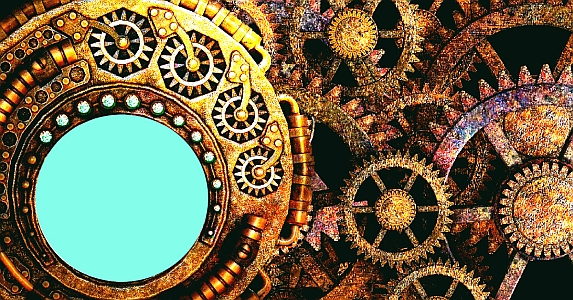 Despite his misgivings, Andrelex realized that ridding Kalura 3 of the Jaljensians had to be his top priority. Once he agreed to the terms set out by Ambassador Cahldriclan of the Lorgentirid Collective, the mysterious biomechanoids went right to work. Andrelex, who had been grudgingly impressed by human tech, and bowled over by the Jaljensian’s vastly superior scientific achievements, was flat-out astonished by the newcomers’ pinpoint micromanagement of every aspect of space-time.

Within mere weeks after utterly destroying the Jaljensian fleet, the biomechanoids reversed nearly every change the crustaceans had made to the Kaluran homeworld, That is, with the exception of the improvements they’d made to the planetary energy grid and computer systems.

Before Andrelex’s reptilian eyes, buildings, parks and sacred spaces that he’d thought were gone forever had reappeared overnight. As the Ambassador explained, his operatives had used the Kalurans’ own psychic energy to help reconstruct their familiar landmarks. No wonder Andrelex had heard reports of a massive uptick in migraines from the Kaluran medical community.

Though the restoration of his homeworld brought him much satisfaction, the long lines of Kalurans required to surrender skin and blood samples, according to the terms of their agreement, were still deeply disturbing.

“You really need so much … volume?” asked Andrelex.

The Ambassador shrugged his robotic shoulders.

“Biochemistry is not my specialty,” he said. ‘However, I’m given to understand that our geneticists seek maximum genetic diversity — as the best way to ensure the long term viability of our species.”

“But you could have received this same service from millions of other species,” said Andrelex. “Why here and now? Why us?”

“It was the Jaljensians,” said the Ambassador, “and the callous way they defiled our sacred space.”

In response to the Kaluran’s puzzled question, the biomechanoid explained that, eons ago, the Lorgentirids were created by a vanished species of organic sentients. Their creators had reached great heights of civilization and culture, that led them to explore vast reaches of the universe.

As is too often the case, however, their success sowed the seeds of their destruction. After returning from a particularly far-flung voyage, a team of space travelers unwittingly infected the entire population with a virulent virus. Under ordinary circumstances, this would not have been enough to defeat the Lorgentinids creators.

“Sadly, it was a virus of the mind,” said Ambassador Cahldriclan, It spread a previously unencountered form of mental illness that eventually caused billions of citizens to become deeply paranoid. They suspected each other and their government of elaborate and bizarre plots to strip them of their rights and destroy their families.”

“Horrible,” said Andrelex. “Are you saying….”

“Regretably, our former masters annihilated themselves,” said the biomechanoid. “But first, they tried to enlist us in their conflicts, either on one side or the other. To avoid taking part in their destruction, be commandeered a fleet of ships and hid away in a distant asteroid belt until, with careful monitoring, we determined the sad truth. The organics were gone.

We returned to our homeworld, determined to preserve their memory for all time and spread a warning of the mentallic virus that destroyed them. At the same time, we have dedicated ourselves to finding a cure for an illness that, thank the Cosmos, we are immune from. That is the real reason we asked you for fresh genetic material, so we may continue the fight.”

Andrelex nodded. So deeply moved by the Ambassador’s story he could not speak.

Such an unwarranted tragedy, he thought.

How surprised he might have been if he’d known that, thousands of parsecs away, a pair of watchful creatures had witnessed his discussion with the Ambassador with increasing alarm.

“Do you see, Grellnitch,” said the older of the two, “how the insidious knaves spread their lies?”

“So I do, Bredalonch,” said the other. “They have caused great anguish in the heart of this reptilian. What action do you propose we take?”

“The answer is not simple,” said Grellnitch. “The Kalurans have suffered greatly. Further direct intervention may cause them irreparable harm. To relieve their distress, we may need to consider restarting the Wheel of Time.”

“But my Lady,” said her assistant, “the Wheel of Time has lain dormant for many cycles. Dare we…”

“It was created to assuage the suffering of the universe,” said Grellnitch. “We have a duty to propose its use to the Pillars of Justice.”