Episode 7: Justice of the Pillars 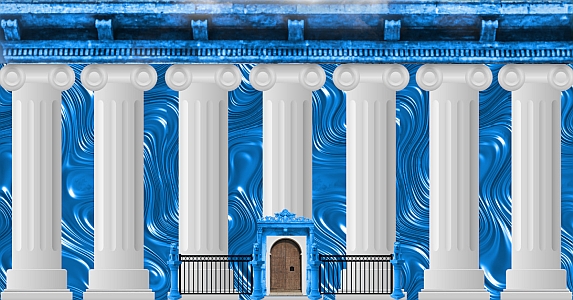 Within Rotalin society, the Pillars of Justice occupied a position of reverential awe. Massive columns of ancient titanium, they gleamed in the early morning sun with an austere splendor unmatched in the known universe. But that was nothing compared to the esteem in which the Justices themselves were held. it was said that merely to hear their voices was to be endowed with the wisdom of the ages.

To human eyes, they might have appeared less impressive. Like the average Rotalin, they belonged to a species of sentient rodent of whom the most one might say was that they had unusually spotless coats of reddish brown fur. Though, in fact, their fur was swathed in robes of yellow silk, over patterned cotton bodysuits, which were adorned with slivers of cut crystal

Under the circumstances, Grellnitch and Bredalonch could be forgiven if, despite their standing on the Planetary Council, they trembled as they approached the Pillars a few days after requesting an audience, Now that moment had arrived, Bredalonch wasn’t certain that Grelnitch’s concern for the Kalurans was worth so much drama. But the determined set of his supervisor’s jaw convinced him there was no turning back.

At last, they reached the high-vaulted entryway that separated the Pillars of Justice from the world of everyday commerce. From this point forward, they would speak only in hushed tones and only when spoken to. Heads bowed, they entered at the kindly urging of two female acolytes, dressed all in white.

Soon, the two supplicants entered a vast chamber of incredible beauty. Stained-glass windows, rivaling the splendors of a French medieval cathedral rose above them, casting polychrome shadows on white marble tilework. But they had little time to take in the ornate interior before a stern, unseen voice echoed out over a high desk some three meters above them.

“Council Lady Grellnitch, you have made a provocative request of a most unusual nature,” said the voice. “In the lifespan of the present members, nearly one hundred and eighty cycles, no one — I emphasize — no one, has seen fit to mention the Wheel of Time, let alone suggest its use. Why should your request now be considered by the Pillars of Justice?”

“Silence!” boomed a second voice. “You have not been given leave to address the Pillars.”

“To continue,” said the first voice. “There appears in your report some indication of temporal entanglement on the part of both the imperialist crustacean Jaljensians and the biomechanoids of the Lorgentirid Collective. Both have used temporal distortions to achieve their ends, by flagrantly bending space time to speed processes that would ordinarily have taken several arcs, if not longer. This arrogant disruption of the natural timeline must not go unaddressed. It is therefore the ruling of the Pillars that the Wheel of Time must be activated for the greater good. Know, however, that the consequences of this action cannot be fully known.”

“If I may,” she said. “I would like to offer my thanks for your ruling.”

“You may not!” said a third, unseen voice. “The Pillars of Justice do not act to secure the affirmation of any being. Our decisions are based on the rule of law alone. We do, however, thank you for bringing this matter to our attention. Now, would you like to witness the unveiling of the Wheel of Time? It is an honor few have been granted.”

Grelinitch nodded. In spite of himself, Bredalonch wept for joy, as they were led, again by two acolytes, into a vast chamber to the right of the main hall. Motion sensors made the darkened room flood with light. A low rumble entered their ears and, to the accompaniment of a steady vibration, a massive structure rose out of a deep well before them. Little by little, it emerged. Encrusted with gears, dials and control panels, it emitted an eerie glow and seemed to radiate all-knowing sentience.

“Behold, the Wheel of Time,” said a fourth voice. “You will don the goggles the acolytes will hand you and we will begin the Recalibration.”

The two councilmembers complied, and a series of throw switches, toggles and keys flickered to life as if on their own. The next moment, the sound of a thousand voices, babbling at once filled the chamber which was then suffused with searing blue light. Grellnitch and Bredalonch fell to the floor, stunned by this magnificent show of power. How, they wondered, with their last shred of consciousness, would the universe respond?