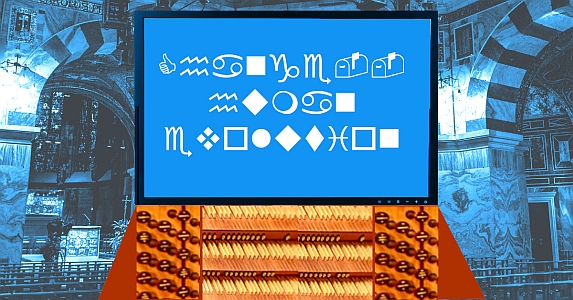 The two Councilmembers were roused by a harried attendant, swathed in emerald green silk robes. They awoke to a flurry of activity surrounding the Wheel of Time.

“I am Krintholamir,” he said. “We are about to select the path the Wheel must travel for the good of all. Hurry into the mapping chamber.”

Grellnitch and Bredalonch rose to their feet groggily, as if they’d been drugged, but nevertheless followed the tall attendant into yet another imposing chamber within the Pillars of Justice. Once through the threshold, they gazed up in wonder at the snowy-white dome that seemed to float above them. Crisscrossing the dome were a series of sentences in bright red characters, which spelled out phrases in an ancient form of Rotalinese.

Though they were meaningless to Bredalonch, Grellnitch, who had once studied for the priesthood, was able to make out most of them. They read like plot summaries of complex holovids.

HUMANS’ ARRIVAL ON KALURA LEADS TO CIVIL WAR AND DEVASTATION

“Who would have thought the timeline was so variable,” said Bredalonch. “Any choice the Justices make could have grave consequences.”

“It’s wise of you to realize that,” said Krintholamir. “What is more, whatever change we make cannot alter the basic principles of history. Cultures rise and fall. Relieving suffering in one quadrant of the universe may well inflict suffering on another.”

“So how will the decision be made?” asked Grelinitch. “We wished to avert a crisis, not create a new one in its place.”

Krintholamir nodded and led them to a large holographic screen, which rose only a few inches behind a multi-tiered keyboard. A human in the room might have compared the total effect to an ancient cathedral organ.

“This, Council Members,” he said, “is the nexus coordinator. In a few moments, Justice Alchianoral will enter a series of variables describing recent events into the keyboard. The screen will display the turning point in the timeline that determined the regrettable outcome we face today. It will then reveal the action necessary to deflect the flow of events in a new direction.”

The three of them watched in awed silence as the Justice descended from her perch at the high desk, approached the keyboards and entered a long string of characters. Each keystroke added to a tangled composite figure at the center of the screen which, the moment she pressed the final key, resolved itself into a single sentence.

“There,” said Krintholamir. “We will intervene to stop the mayor of Kalura’s capital city from contacting the Jaljensians. However, we will not do so by force, if my guess is correct. Ah, look, the screen has been activated again.”

“So you believe that Andrelex will act differently if the humans are less … abrasive,” said Grelinitch.

“That is the conclusion of the Wheel of Time,” said Krintholamir. “I dare not voice an opinion, except to say it has the ring of plausibility.”

Grelinitch furrowed her furry brow. The required change in human culture was significant. Still the idea of any society becoming more tolerant seemed as if it could only have a positive outcome. Yet one thing troubled her. As she knew from her study of evolutionary biology, the society any sentient species built was usually a direct reflection of its genetic heritage.

“Forgive me, Attendant Krintholamir,” she said. “but won’t this solution require a vast and intricate change in all of human history?”

“It may be so,” said Krintholamir. “But I fear this is out of our hands. Only the Justices can decide such weighty matters and, now that I see that the nexus coordinator has grown dark, it appears that the matter is settled. Human history is about to be reshaped on a grand scale.”

Grelinitch bit her lower lip and whispered a prayer in her mind. Would she one day regret bringing her concerns to the Pillars of Justice? But it was too late to reconsider. Already a bright glow emanated from the chamber containing the Wheel of Time. The three of them returned there to see it ramp up to full power, as its gears, dials and lights switched on one by one.

“Now we can only await the outcome,” said Krintholamir. “and trust to the wisdom of the Pillars of Justice.”