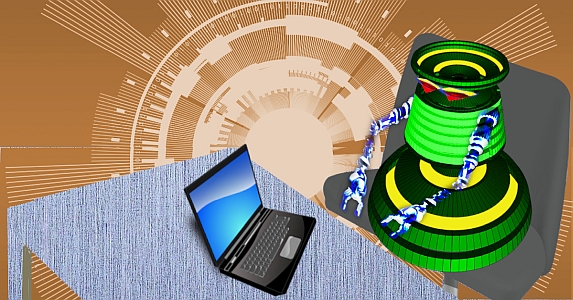 17Kevin37 ran his life with a minimum of disruption. Protocols observed. Maintenance schedules upheld. Duty rosters completed. Leave time taken. Sleep, meals, exercise, sex: on schedule. He was in peak physical condition: strong and clear-eyed, with the reflexes of a cheetah.

But make no mistake, 17Kevin37 could never have achieved his level of compliance in the WorldUnion Integrity Force without personal initiative. It expressed itself in his unwavering commitment to the Ideals set out in the Integrator’s Tablet. Not the current Integrator, mind you, but 43Dalia67 — originator of the One Reality, inhabited solely by validated citizens of the UniversalOrder.

The Tablet contained both a ground-breaking set of specs for cyber-integration and the ethical precepts of Regulated Living. For citizens of the WorldUnion, every aspect of daily life was governed by the Integrity Rating (IR) they attained at work, at home, in social interactions and on mandatory ceremonial occasions.

It was due to his meticulous observation of The Tablet’s protocols that 17Kevin37 had earned the rank and privileges of Regional Enforcer for the Epsilon Eridani Sector. His list of commendations, awards and other marks of distinction were a source of personal pride. Despite The Tablet, they were also a source of disgruntled envy.

All of which made the present state of affairs so incomprehensible. Today, instead of running a scheduled raid on a cadre of unregulated cohabitants in the Rand Asteroid belt, 17Kevin37 sat in a functional office cube. awaiting the arrival of a WorldUnion Adjudicator. He didn’t wait long. On the dot of 1100Standard, a forest green, roughly conical android rolled into the appointment cube and connected its outputs to the cube’s conveniently located jacks.

“We will commence,” said the android. “As your implants have already informed you, my call name is 23Adjud47. You will comply with my requests as it is written.”

“The protocols of The Tablet will be observed,” said 17Kevin37.

“Describe the incident,” said the android. “Though it is a matter of public record, the pursuit of fully integrated justice requires your statement.”

The temporarily suspended Regional Enforcer paused to collect his thoughts — and absorb the mild shock had having his routine log entry referred to as an “incident.”

“I was conducting a cleansing mission in the Cancrizans system,” he said. “My pod had penetrated an illegal holomask and uncovered a swarm of Resisters, cohabitating in non-Standard dwellings. None of the Resisters were compliant. We herded them into isolation chambers, which rolled into the cargo bay of our landers.”

“But, initially, not all of the Resisters,” said 23Adjud47. “You had — and this I must emphasize for the record — you had a conversation with an unregulated female.”

“She identified herself as 7Reah19,” said 17Kevin37, “of the Sirius Sector, and claimed to have been captured by the Resisters.”

“What steps did you take to verify this assertion?” asked the android.

“I attempted to connect to her telepathic circuits, on the theory that…..” said the cyborg.

“Regional Enforcer,” said 23Adjud47, “I do not recall any passage in The Tablet that empowers you to formulate theories. Is connecting to a subject’s telepathic circuits a component of Standard Procedure?” 17Kevin37’s eyes narrowed.

“Thank you,” said the android. “You have successfully completed your interrogation. Compliance rating 9.99989 with one hesitation. Please wait for your sentence.”

As per protocol, reasoning subroutines quickly intervened to dampen what would otherwise have been an emotional response to the word “sentence.”

“Objective analysis of your pre-frontal cortex has revealed a malfunction in your 1U9 empathy subroutines,” said 23Adjud47. “That model line has been discontinued, due to several incidents similar to your own. This is verified at the local level by telepathic survey, which reveals you retain residual concern for the well-being of so-called 7Reah19. Acknowledge.”

“Acknowledged,” said 17Kevin23. “I was deceived at first, but quickly realized….”

“Errors, regardless of the source,” said the android, “are errors. Do you deny deviating from Protocol?”

17Kevin23 shook his head. The Adjudicator’s status lights blinked in a complex pattern for nearly a full minute.

“Sentencing complete,” it said. “You will be remanded for Rehabilitation. Based on your previous record, I have indicated replacement of the faulty neurochip and the installation of an approved replacement. However, no replacement has yet been approved. You will be offline until further notice. Session ends.”

The android unplugged itself from the interrogation cube and rolled away. A placid voice piped up out of the cube’s PA system.

AN ADAPTATION SPECIALIST WILL BE WITH YOU SHORTLY. AT THIS TIME, ALL IMPLANTS WILL BE DEACTIVATED. YOU MAY EXPERIENCE MILD DISORIENTATION.

The former 17Kevin23 broke out into a cold sweat, as wave after wave of suppressed emotion swept over his now unregulated mind.

“Kevin Walsh?” said a soft voice behind him.

Kevin craned his head around.

“Relax, Mr. Walsh,” said Reah. “The first thing I tell my new clients is that implant shutdown requires a period of adjustment. The mind throws out all kinds of random thoughts just to make sense of the new sensory input. I promise: we’ve never met. Come with me, please?”

Kevin watched as the 30-something Specialist walked toward the nearest exit — with the sinking feeling his life had taken a turn for the worse.