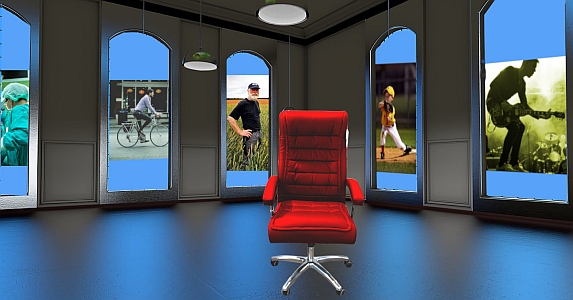 Inside the spatiotemporal rift that Reah had created, Kevin was confronted with a disorienting blur of contrasting perspectives, plus shifting patterns of light, color and sound.

One moment, he saw a large cityscape from 30,000 feet above. The next moment, he was at street level, jostled by an on-rushing crowd of morning commuters. He was also plagued by random shifts in time frame. At first, the city looked like it belonged to his era. Suddenly, the streets’ speeding ground cars were replaced by carts and carriages pulled by local beasts of burden — and the general level of technology reverted to that of the distant past. Yet, not long afterward, the scene jumped forward to the far future.

The look on Kevin’s face made Reah smile.

“A bit of a jolt, isn’t it?” she said. “That was just your mind’s attempt to reorient itself to this atemporal zone. I think you should find it easier to cope from now on.”

“Couldn’t get any worse,” said Kevin. “But I still don’t understand. You’re not actually human, are you?”

Reah took his hand and led him along a quiet walkway that led to a sprawling campus of high-arching structures. To Kevin, they looked more like sculptures than buildings.

“I’m as human as I am anything else,” said Reah. “My ‘people’ are beings made of pure life force, which we can pour into any form of matter we choose. Humanoid shapes happen to be fairly practical and energy efficient. But there are many times when circumstances require me to adopt a form you wouldn’t recognize as living.

“I must seem like a child to you,” he said. “With so much power, why do you even bother with any of us?”

By now, they’d passed through the entrance to the campus and were heading for a large glass and steel parabolic dome to their right.

“I see I’ve confused you,” said Reah. “While we’re beings in one sense, we’re also embodiments of universal principles. It’s not actually up to me to decide to help you. I help you because that’s what I am. If it helps you understand, imagine that my real name is “Balance.”

“Close enough,” said Reah. “The animus driving the Tellurians has pulled the fabric of Causality out of alignment. We have stepped in now to restore order.”

The entity that, until now, Kevin had thought of as Reah, led him into a large, ovate room whose walls were a mesh of a composite alloy that his implants couldn’t identify. Arranged along its curved walls were a series of holographic screens. Each one depicted a different version of Kevin, engaged in various activities. In some, he was a few years younger, in others, older. A few depicted him as a child. And on one screen, Kevin saw himself gasping in a hospital bed. Reah asked him to sit in the room’s centrally located swivel chair.

“This is your decision room,” she said. “Understand that nothing here is ‘real’ in the sense you mean it,”

“What am I supposed to decide?” asked Kevin.

Reah explained that, as she and the others in her realm analyzed the imbalance created by Tellurian aggression, more and more of their calculations had centered on him.

“Though the Integrator would never have told you,” said Reah, “your extraordinary competence and efficiency have been the lynchpin of WorldUnion’ efforts to comply with Tellurian demands.”

Though she had tried to undermine him by tampering with his implants, the Integrator AI had found a work around.

“I was forced to intervene more directly,” said Reah. “And here you are. If you wish to help me restore balance to Causality, you must choose an alternate path to follow.”

“One way or another, you must be extracted from the network of Causality that governs this sector of the Cosmos. If you do not leave voluntarily … well, please don’t make me say it.”

Reah walked to the far wall, removed a pair of shaded goggles from a hook that Kevin hadn’t noticed before and handed them to him.

“These will help you grasp the meaning of any selection you make. Know that you have as much ‘time’ as you need. Your selection will be permanent, but you will never again inhabit a society so driven by violence and oppression.”

Kevin stared at her a moment, then put the goggles on and gazed at each screen. After what felt like hours, he removed them and pointed to his selection. Instantly, the room, Reah, and his entire frame of reference disappeared, to be replaced by a grey fog. Soon afterward, he could swear he heard Timmy Madison yelling at him in his squeaky seven-year-old voice.

“Come on, Kev, quit stallin’” said Timmy. “That was so totally a pop fly.”

Seven-year-old Kevin threw his blonde-wood bat into the dry, spare grass at his feet.