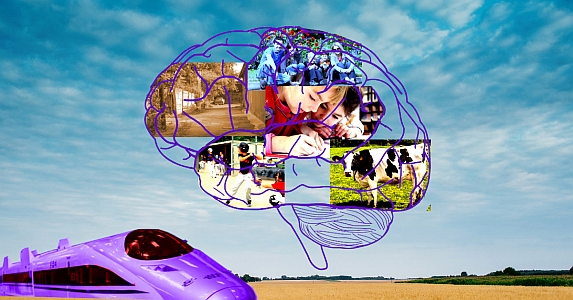 The trip to WorldUnion RehabCenter 151179 by maglev train was the longest eight-hour stretch that the former Regional Enforcer had ever endured. All the way out to Sector West, the name “Kevin Walsh” ricocheted around his reformatted mind, and set off a flood of memory. The eleven years of his childhood, before he was pressed into the Integrity Force, opened out in panoramic detail.

He saw a small town in a region formerly known as South Dakota. Also lumbering through his memory was a creature with a spotted pelt, which was once a major source of unrefined protein. It was replaced by the image of an abandoned warehouse and children playing a game with a polished stick and a stitched white ball. And there was snow: feet of ice crystals that immobilized the townsfolk for weeks.

Back then he was known as “Kev,” or “Kev Junior,” for reasons that escaped him. But he did recall that there were, incredibly, biological parents cohabitating with their offspring. The images of neighbors gathering for lavish “holiday” meals were especially confounding. A moment later, his memory served up a roomful of children crammed behind shiny desks, staring with glazed eyes at a middle-aged woman in a floral print pants suit.

That was four hundred years ago. Born in 2077, he’d received his first longevity treatment when that medical breakthrough arrived in 2110. Three years before, early model cortical implants had changed his perception of the universe, and were updated regularly thereafter.

But that reality was drifting away, replaced with more memories of a distant past.

He teared up and began to shudder. Was this where he was going? The UniversalOrder had eradicated such practices and endowed all of society with the essential Integrity that would one day lead to the perfection of the species.

Except, what had caused his subroutine to malfunction? A strangled cry welled up from his throat.

“How could the Integrator allow this?” he said.

Within seconds, a periwinkle-blue, spherical robot hovered into his train compartment and spoke in a soothing female voice.

“Remain calm,” it said. “I will administer a sedative.”

Before Kevin could respond, a pair of clamps held his arms in place while a pneumatic hypodermic emerged from the sphere and injected his right arm.

The sphere floated out of his compartment. Kevin felt his heart rate settle down to an even pulse for the first time since his interrogation that morning. He dozed off, until a slight inertial shove woke him again, as the train glided to a halt. His eyes fluttered open to see Reah Landesman standing over him.

“Will there be snow?” asked Kevin.

“You’ll see,” said Reah. “You’re used to a continuous data feed. It makes you uneasy not to know the answer to every question. That’s your first assignment. Get used to discovering the world for yourself.”

“I know the world,” said Kevin. “I’m a Regional Enforcer with a four hundred-cycle mission log.”

“Good for you,” said Reah. “So tell me, what are our present coordinates?”

“What’s our altitude?” asked Reah. “What’s the dew point of the nearest…”

“Good,” said Reah. “Except for the shouting. You’ll see. It’s an easy habit to break, once you stop trying to take control.”

“… to the smooth maintenance of the Universal Order,” said Reah. “Yeah, I know. Any idea how many meal packets you can buy with that here?”

“Can we get off this train?” asked Kevin.

“Yes, Mr. Walsh,” said Rhea, “provided you stop fighting your rehabilitation. I know you feel you’ve been wronged. But for the sake of your continued mental health, an ounce of acceptance will go a long way.”

Kevin resisted the urge to ask Rhea what an “ounce” was and stared down at his hands.

Rhea smiled again and he was perplexed to find that reassuring. Why? She wasn’t on this roster for … but of course, his “recreation” schedule had been dislodged along with every other familiar touchpoint. He might, he realized, have no or limited opportunities from that point forward. But surely, some … social convention … must govern.…

Kevin’s mouth twisted up into a half smile. He stood and followed her out to the train platform. The afternoon sun was disturbingly bright, and no wonder. This was the first time in centuries that his vision hadn’t been regulated by automated corneal shading, activated by his implants. His cupped right hand shot up to his forehead.

Reah pointed to a dull gray ovate monstrosity that looked barely airworthy. It must have been a century out of date. Reah greeted the look on his face with a snicker.

“It’s reconditioned,” she said. “Kind of a family heirloom.”

“You … you knew your family?” asked Kevin.

Reah nudged him gently in the direction of the hovercar.