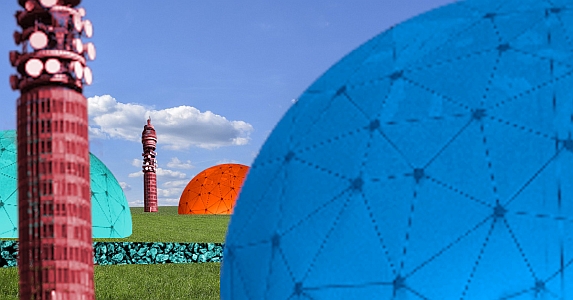 The view of RehabCenter 151179 from the hovercar landing pad took Kevin by surprise. Its sprawling, one hundred-acre campus was as thoughtfully landscaped and carefully manicured as any botanical garden on New Denver.

“I was expecting a minimum security facility,” he said.

“Oh, no,” said Reah. “You’re free to leave — if you’re willing to starve. With your implants shut off, you have no access to credits, so no food delivery. You’d never be allowed to farm state lands and there’s no other kind. You could beg, but every Enforcer knows begging is a crime that would land you … where?”

Kevin stared at the pastel-green gravel walkway under his feet.

“In a RehabCenter,” he said. “I was … just making conversation.”

“Doesn’t hurt to acknowledge the truth, though,” said Reah, “even by accident. Truth, Mr. Walsh, is your friend. Get to know her.”

She set off toward a cluster of residential domes to their right, along a gravel path that extended west. Kevin gazed around him. Residential domes and administrative buildings in a variety of geometric shapes were arranged in harmony with a lush, green environment. Judging from the air vents that jutted from the ground at various points, he realized that some parts of the Center must be underground. Reah caught him staring.

“Some belong to geothermal generators,” she said. “Others are exhaust vents for underground replication and processing. We’re entirely self-sufficient,”

“We aim to eliminate contact with contaminants,” said Reah. “That’s the reigning theory. Every resident has been contaminated by a foreign agent.”

“But….” he said, “the Adjudicator told me I had a subroutine malfunction, because of a design flaw.”

“Yes,” said Reah. “The designers failed to take into account the degree of contamination your mind had already sustained. Otherwise … no malfunction.”

They walked the gently winding path to the residential area. Reah pointed out landmarks, including the signal towers to the south that fed updated data to Center administrators.

“But not to you,” said Reah. “Most people find the silence restful.” Kevin held his tongue. So far, the absence of his accustomed data stream was the worst part of his ordeal. But he forgot all about data deprivation, the moment they stepped into the largest of the domes. The muted, interior colors combined with many other factors, to create a mood of profound tranquility — including soft, indirect lighting, quiet, ambient music and the soothing odor of oven-fresh bread. Kevin fell under their spell at once, until he remembered a phrase from his indoctrination into the Enforcer corps.

“Environmental manipulation,” the instructor had said, “Is the most powerful means to subdue an unruly population. Make resisters feel safe and secure and you own them.”

Reah stared at him a moment.

“Tell me you’d rather sleep outside,” she said. “I can requisition a tent and a heating unit, but it will take a few arcs. That is, unless I add ‘extreme mental derangement’ to my report. At which point, WorldUnion PsycheCorps will set up a tent for you in one of its secure facilities in no time.”

“Can’t I say anything?” asked Kevin. “You’re no different from the….”

“From what?” asked Reah. “From that lying Adjudicator?”

Kevin wiped his eyes with both hands.

“Stop badgering me,” he said.

“Would you like to see your quarters now?” asked Reah.

Kevin nodded and Reah led him to a low-slung, exposed stairwell, framed in light, carbon composite tubing. Two flights up, she paused, turned right at the landing and stopped in front of a navy blue, ovoid doorway.

Kevin extended a trembling palm toward the inset at the door’s center. Reah nudged him inside as it slid open. Soft track lighting flickered on, to reveal a single-unit home. Its every function flowed into every other, with the exception of a shower room, which was set off by another handprint-activated door. Reah showed him a wall-mounted tablet just inside the doorway and tapped on it.

Reah rested a hand on his right shoulder.

“No,” she said, “you’re not. See you at Communal. I recommend the broiled Brussel spouts.”

She took her hand away and walked her graceful walk out of his quarters.

“Brussel spouts?” asked Kevin. “How contaminated am I?”

His heart racing, the former WorldUnion operative plopped down on his bed, which conformed to the shape of his spine. The dome’s AI piped up over a discreet comsystem.

“Welcome, Mr. Walsh,” it said. “I have a list of possible recreation mates for you to consult whenever you’re ready.”

“That’s the first thing you say to me?” asked Kevin.

“My responses conform to the response profile engendered by your previous interactions with the WorldUnion Monitoring System,” said the AI. “As your behavior changes, my responses will adapt to….”

“How about you just shut up?” asked Kevin. His eyes misted over and his mind flooded with memories of Kev Junior, fists clenched, arguing with Timmy Madison about the status of his last hit.

“Totally not a foul tip,” he whispered.