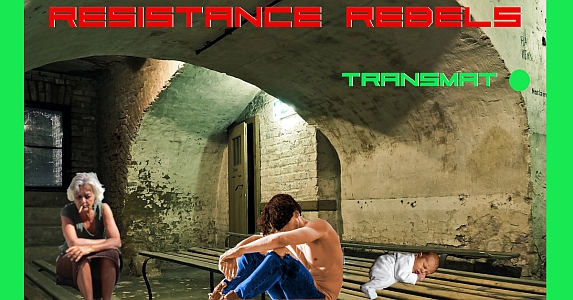 In spite of Reah’s message, the Integrity Force pushed Kevin back out into “the field.” As before, he was assigned a team of operatives and sent to rebel hotspots. Yet, how much his perspective had changed!

As he burst into a newly uncovered rebel hideout, he found no ruthless gang of criminals. Instead, he saw ordinary people cowering in fear, their eyes pleading for mercy. For the first time, he read their desperate attempt to escape oppression in the cramped, decrepit bunker where they’d hidden. These unfortunates had likely spent most of their remaining credits on a holographic projection they hoped would conceal them — only to discover they’d purchased the necessary equipment from an undercover government operative.

Can’t do this, he told himself. Can’t round them up like cattle.

Kevin heard what sounded like a soft electronic whir. Reah’s voice echoed in his mind.

The whir faded and Kevin realized that Reah had closed contact. No doubt there were limits to how long she could cover her traces. But how was it possible for an AI Adjudicator to defy the Integrator’s tight circle of power?

Now his trained eye told him that his operatives were getting restless. Another minute and they’d start questioning his authority. They might even add “comments” to their field reports that would end up on his performance logs.

59Julia79, a young woman whose ancestors had hailed from a region of old Earth once known as “China,” spoke up sharply.

“May I remind you, Enforcer,” she said. “that Sector South is the recommended relo for this region.”

“New orders,” said Kevin. “Issued on a need-to-know basis. Are you requesting a demotion? Perhaps this level of field work is too stressful for someone so unadaptable.”

Kevin nodded. He’d chosen his words well. In the strictly regulated WorldUnion, “unadaptable,” was code for “disobedient.” True Believers “adapted” to the Integrator’s Changing Realities without question. Yet, as he knew, a continual use of harsh smack-down techniques would only foster resentment and suspicion among his team. He made a mental note to single out 59Julia79 for public praise at the next opportunity.

More to the point, he’d been caught off guard. If he had any hope of surviving in his new double life, he needed a coherent strategy. But where would that strategy come from and where would it lead? The answer would have to wait. Kevin’s next assignment slid into his mental inbox within minutes of completing his previous one.

What now? he wondered.

Coming on the heels of his near miss with his subordinate, Kevin swung into action. “Move out to transmitted coordinates!” he shouted. One by one, he and the rest of his 16-person team activated the triangular personal transmat devices worn on their belts. The same belt, in Kevin’s case, where his A47G particle gun was holstered. Would he have to aim it at Reah?

There was no time to think. Within minutes he materialized on the grounds of the Sector West Rehab Center he’d left only the day before. In the near distance, his former private dome beckoned to him, but he forced himself to look away. Soon, the spatiotemporal coordinates of the underground Resistance headquarters appeared on his internal view screen. With a wave of his practiced hand, he summoned a suite of excavating equipment by transmat from Central Procurement.

“The Resisters will be extracted,” he told his team. “Stand by for capture. Weapons on stun. We want Intel, not corpses.”

Had he bought Reah enough time with his last commands? His only hope was that the coordinates he’d received had been dummy ones, designed to throw the Integrity Force off the scent. And yet, as the excavation continued, a hidden complex was, in fact, uncovered. Huddled behind its ruined walls were what looked like a team of frightened rebels.

Androids, said Reah. You’ve been sent on a wild goose chase. Heads will roll. Call it out for what it is and earn yourself a promotion.

Reah closed contact, leaving Kevin puzzled. Did she really want him to advance in the WorldUnion’s hateful system? But, of course. The higher placed he was, the more influence he’d have.

“Check these rebels’ vital signs!” he said. “There! Non-organics! We’ve been duped! Who knows where the real Resisters have escaped to — or where these orders came from. I’m putting this entire assignment on report.”

If he could believe Reah, this was the start of a slow rise to power that would enable him to crush the Integrator’s hold on humanity. But what, he wondered, if he were really being led into a steeper moral decline than before?

For his own survival, he had no choice but to continue down the path he’d entered. Now more than ever, choice was the one luxury he craved above all others.