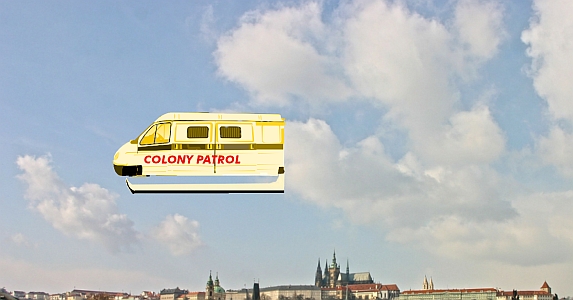 Inside the speeding hover car that NolJonra had ordered, Kishor marveled at its many creature comforts, which included a holovid entertainment center and a tempting wet bar. But Kishor was too nervous to fiddle with either of them. Besides, the smell of alcohol on his breath would have made his new girlfriend suspicious. What had he been up to, she’d wonder, so soon after the Learnin Center let out for the weekend? Had he even skipped school?

Kishor gulped. Laranya wouldn’t approve of that. Besides, she wasn’t just his latest love-interest, she was his first. Up until then, the girls in his class had been more interested in play-acting love than living it. Laranya, on the other hand, had taken him seriously from the start. Their kisses were…

The hovercar’s machine voice made a jagged cut through Kishor’s heated reverie. He gazed out of the car’s side window and made a point of fluffing his lush black hair at the sides. Were his clothes, he wondered, new enough, fresh enough, stylish enough?

Cut it out, he scolded himself.

Laranya liked him the way he was, he decided. And if not, there was no point in getting agitated ahead of time. Yet agitated he was, mostly in a good way, as the hover car alit and its two side doors opened out, like a bird of prey ready to strike.

THANK YOU FOR TRAVELING WITH….

Kishor didn’t wait for the car’s AI to deliver the rest of its pre-recorded pitch. He was already out on the street, heading for Laranya’s dome complex, his mind overflowing with anticipated conversations. But nothing looked right. Five meters away from where his hover car had landed, the usually seamless polyslate sidewalk was a crumbling rubble. To keep from tripping, Kishor was forced to step out into the street.

More trouble from Nol, he told himself.

At least, nothing about seismic activity had come across his comcoder from the local newsnets. But none of that mattered, he figured, as long as Laranya’s dome complex was still in tact. With that in mind, he broke into a trot and wove between more damaged streets and sidewalks. Fortunately, as he arrived at the rounded plaza where Laranya’s complex sat, he felt reassured enough to call her up on his comcoder.

“Kishor!” her voice rang out. “What are you doing here? The skytrain’s down and my whole neighborhood is, like, broken.”

She answered his anxious question with a sweet smile.

“I’m fine” she said. “But I can’t go out. Our apartment’s a mess and I have to help my Mom bail water out of the kitchen. Love you, Sweet Boy, but you should go home and help out there. Gotta go.”

Kishor’s heart sank. Not only had his date ben foiled, but he’d made himself look clueless and irresponsible. Worse, he had no way to get home, except on foot. The last thing he wanted was any more intervention from his android visitor. Based on what he’d seen so far, it looked as if the friendly, alien AI didn’t understand the consequences of his actions.

Lost in thought, the sound of heavy-soled boots clomping up behind him made Kishor spin around — in time to see two members of the local patrol unit standing tall in front of him.

“Kishor Joshi,” said the younger of the two patrolmen. ”ID 2470-53T/1. You are in a restricted zone, outside of your home quadrant. Want to explain yourself?”

“How did you get here?” he asked. “All skytrain stations are out within 15 square kilometers.’

The two officers stared at each other. The younger one nodded.

“We’ll forget you said that,” he said. “Reports of a stolen hover car just came in … but you don’t look like a car-jacker. Not yet, anyway. Come on. We’re taking you home.”

Kishor thought better of protesting, followed the officers to their airvan and let himself be strapped in. The younger of the two officers called up the comscreen embedded in the dashboard.

“Looks like Central detected a massive power surge near his dome complex, Sarge,” he said.

“Know anything about that, Kishor?” asked the older officer, as the air van rose into the sky.

Kishor shook his head. It was better, he decided, to say nothing, than to stumble through another denial.

“Yeah, well, you better start paying attention,” said the younger officer. “If this is what I think it is, there could be aliens walking around your neighborhood any time now.”

Or stuck in my closet, thought Kishor.

Within minutes, the patrol’s air van had set down not far from Kishor’s dome complex. The officers let him out with a stern warning not to leave the area until further notice. Kishor nodded and jogged off home, his heart in his mouth. Lucky for him, this was the night his parents attended Community Watch meetings. He entered his darkened home, raced over to his bedroom, locked the door behind him, peered into his closet — and suppressed a scream.