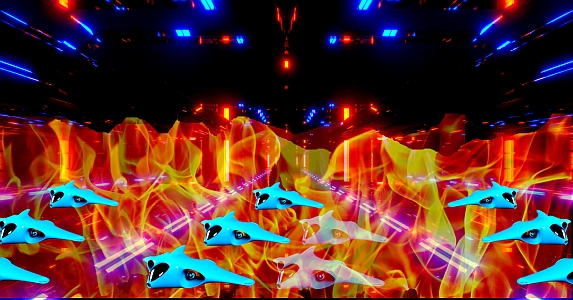 Nol was stunned. His ingenious attempt, to convince GolTrenka that Kishor’s homeworld was a powerful adversary, had succeeded too well. The rapacious military leader was now drawing up plans for a surprise attack.

Worst of all, Nol realized, the humans were totally defenseless. Though Kishor’s colony, “Aasha,” had been founded twelve hundred years before, the humans had really just stuck their toes into deep space. They’d stumbled into a sparsely populated galaxy, with the help of the peaceful, benevolent Ynold, and had never seen the need for planetary defense systems.

Meanwhile, NolJonra’s sensors told him that Kishor was already toiling in the radioactive mine shafts that would be his undoing.

The poor boy has never had to lift a finger for himself, thought Nol. Now he has to handle a heady lase hammer….

A flash of insight surged through Nol’s cognitive processors. GolTrenka had unwittingly given Kishor a powerful weapon. With some long-range telemetry, Nol could reprogram the lase hammer to strike key targets within the Commander’s battle fleet. Better yet, Kishor would be able to “strike” without realizing it, so he’d never arouse suspicion. But the little android would have to act fast.

Nol hacked into the lase hammer’s central processor with a powerful wireless connection. Soon he’d rerouted its output functions into two separate streams. When Kishor fired his hammer, he’d not only blast the rocky walls of the mine shaft, but send a high-energy surge directly into the guidance systems of GolTrenka’s fleet. The guidance systems would be fried to a crisp — but no one would ever suspect Kishor’s hammer.

Good thing all of our circuits are based on the same principle, Nol mused.

But would his subterfuge actually work? Half an hour later, the screams echoing down the corridors of GolTrenka’s command center delivered the answer.

“Three entire squadrons destroyed in ten blinks!” said GolTrenka as she stormed into the transmat center where she’d left Nol standing alone. “How come none of my AIs detected this assault?”

“Excuse me, Commander,” said Nol. ‘But I did warn you. The humans are a very advanced species. They destroyed our fleets by remote control.”

“How did they even know we were planning an assault?” she asked.

“Either they already had this outpost tapped,” said Nol, “or the boy is telepathic.”

“But we didn’t detect anything of the kind,” said the Commander. “Our physicians assured me there was nothing unusual about that human.”

“Mistakes happen, Commander,” said NolJonra. “The question is, what are you going to do about it?”

“I want the human released immediately!” said GolTrenka. “Get him in here and escort him personally back to his miserable planet by transmat — before those monsters do any more damage.”.

“Yes, Commander,” said Nol. “As always, your brilliance shines forth like the light of two suns.”

“Oh shut up,” said GolTrenka. The android watched as the frantic officer stomped out of the transmat center, then set to work. An hour later, Kishor was back at his side, scrubbed up and wearing a temporary gasmask that the transmat device would ignore. With a nod to the technicians, who were all-too aware of GolTrenka’s orders, Nol helped an exhausted Kishor into the transmat pod.

“Engage,” he said. Almost instantly, they were back in Kishor’s room, moments before he set out for his disappointing trip to the Skytrain station.

“Thanks,” said Kishor. “I couldn’t have lasted much longer in that mine. But I don’t know how I can explain being away so long to my parents. They’re gonna kill me.”

“Maybe not,” said the android. “Consult your chronograph.”

“How … it’s just a couple of minutes until I have to leave for the Skytrain.”

“I took the liberty,” said Nol, “of engaging my temporal displacement engine a nanosecond before the transmat beam hit, and redirected our return to your homeworld.”

“Whoa,” said Kishor. “Hey, but that means I can still make my date with Laranya! But what about you? Are you stuck here again?”

“Not this time,” said Nol. “In fact, I’d better hurry. Even with time displacement on my side, GolTrenka will be suspicious if I don’t zap back on schedule. If I leave right now, I can realign myself with the return transmat beam as if nothing happened.”

“Actually, you won’t,” said Nol. “Once I return, the timeline will repair itself and you won’t remember anything.”

But Nol had already faded from view. Now Kishor’s main preoccupation was deciding what to wear on his big date. On his way to his clothes closet, a bottle-blue insect scurried across his path.

“Ha!” said Kishor. “Where you going little bug? Off to war?”

A strange tingling sensation ran up the boy’s spine and a dreamy memory hovered at the edge of his consciousness, like an errant soap bubble — which popped at the sound of his mother’s voice.

“Kishor, Dear,” she said. “You’d better hurry if you want to catch the Skytrain.”

So it was that Kishor Joshi, recent spatiotemporal explorer, went silently back to his life as a latter day Romeo in deep space — just aching for his very first balcony scene.