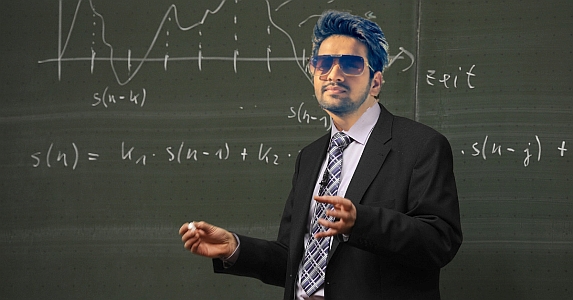 Despite being distracted by a new. alien environment, the android named “Tim” by the Doradahr physicist Alicor, headed straight for his first rendezvous with Greldaar climatologists. First, however, he found a discreet corner of the train station in which to engage his chameleon circuits. As his Cultural Awareness subroutines told him, his casual mode of attire would never gain him entry into the right Greldaar circles. To succeed in the first part of his mission, he’d need to wear a “business suit,” a curious designation in that he was expected to impersonate a humanoid scientist, not a “businessman.”.

Yet after several minutes of searching his auxiliary databases, Tim was forced to conclude that Greldaar culture had not developed a comparable “science suit.” The so-called lab coat was, as far as he could ascertain, only worn in a laboratory and, as he later realized, most reliably in the fictional laboratories depicted in the Greldaar’s impossibly primitive two-dimensional “films.”

There was nothing to do but shrug his carbon-nanotube composite shoulders and engage his chameleon circuits until he was suitably attired. This he accomplished in the stall of the train station “men’s room.” When he emerged from the stall, he was met with approval by a disheveled Greldaar who was washing out a handkerchief in one of the room’s many sinks.

“Nice threads,” said the man, whose breath reeked of an acidic substance that Tim didn’t pause to analyze. “You’ll catch yourself a lot of babes in that get-up. Hey, you got a quarter?”

Uncertain what the societally sanctioned response would be in that context, Tim gave the unfortunate man a tight smile, accompanied by a brisk wave, on his way out of the door. Out on the street, he realized he would not need to engage his fumigation circuits as he’d suspected. He proceeded to the address encoded in his central processors and after a brief scan of the facility that was his destination, realized that Alcior’s team had sent advance notice of his arrival and — more importantly — embedded all necessary supporting documents into the Greldaar’s simplistic, digital filing systems.

On that score, Tim’s masters had chosen the spatiotemporal coordinates for his visit with great care. A decade earlier, and the Greldaar would not have had a digital system to infiltrate, no matter how primitive. A generation later and they would have developed a rudimentary security system that would have taken much too long to penetrate. The stage was set. Now Tim needed only to play his part as convincingly as possible, after he presented his credentials at the Greldaar’s so-called “National Center for Environmental Health.”.

But the moment he walked into the Center’s imposing lobby, Tim’s sensors overloaded in a thoroughly unexpected way. Behind a large reception desk was a young Greldaar female. whose broad smile made him stutter uncontrollably.

The receptionist smiled. She was used to dealing with eccentric scientists.

“Oh, yes, Dr. Doradahr,” she said. “Everyone at the Center is excited to meet you.”

Without another word, she placed a brief call and, within minutes, Tim found himself nestled between three more humanoid females in a tiny elevator car.

Have to maintain appropriate discipline, he thought. How, he wondered, did the Greldaar function under such intense psychological pressure?

Fortunately, Tim was soon swept up into a climate forum that was already in progress. Before his central processors were stressed any further, he was led to a podium where, after a brief introduction he startled the room with a simple declaration.

What followed was as series of equations that introduced his humanoid audience to the principles of Doradahr mathematics for the first time. He was able to show, in outline, that the rise in global temperature that they had already predicted, would occur faster and have more disastrous effects than they had previously imagined.

Following Tim’s presentation came a question and answer period, during which a skinny male in a rumpled blazer asked the question on everybody’s mind.

“But Dr. Doradahr, what are we gonna do about it?” he asked.

“I think it’s, like, obvious,” he said. “We’re gonna have to get the fossil fuel industry to cooperate on developing alternative energy sources. You know, like wind, solar and geothermal”

A large woman in the back of the room called out from her seat.

“Are you out of your mind?” she asked. “The fossil fuel industry? Help us? Geez, what planet are you from?