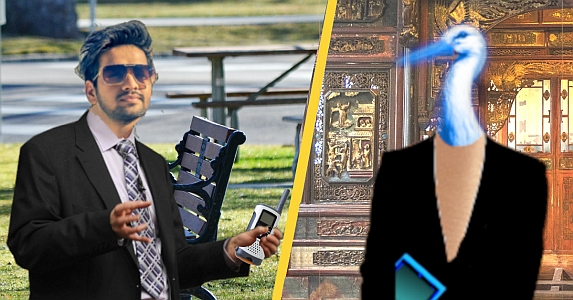 Tim was perplexed. Nothing like this scenario had come up in the simulations that Alicor had run with him before he set out on his mission.

“Really, it should be pretty simple,” said Tim. “If we show those execs the facts, what can they say? They’ll have to admit….”

Another Greldaar scientist who sat closer to Tim’s podium shot out of his chair.

“Do you hear yourself?” he asked. “Hey, somebody call security. This guy must be stoned.”

Tim didn’t like the sound of that. Though his titanium frame was strong enough to resist a simple stoning, he wasn’t at all sure the vat-grown epidermis that covered him head to toe would survive.

“Guess I better get going,” he said.

But his attempt to leave the auditorium with his head bowed to escape the crowd’s angry gaze, failed miserably.

“You think you can take our money, deliver nonsense like that and get away with it?”

“I’ll, like, waive my fee,” said the android. What, he wondered had gotten into these humanoids?

“More like you’ll pay the Institute a fine,” said a stern voice to his left.

Tim looked up to see a burly administrator in short sleeves, walking towards him, whose hairy forearms threatening menace the closer he came.

“How about we show Mr. Doradahr our appreciation for wasting our time?” he growled.

Tim’s finely balanced ocular sensors bulged as five of the largest males clomped up to him. A second later, his arms were pinned behind him and he was lifted off the floor. Though he was more than strong enough to overpower them all, he knew that would reveal his otherworldly origins. No matter how bizarre, he’d have to let the Greldaar’s’ behavior run its course.

As a result, he soon found himself sailing out the front door of the august institution where, just hours before, he’d been greeted like a visiting deity.

“Don’t show your face around here again,” shouted the hairy-armed administrator. Stunned, Tim picked himself off the cracked sidewalk in front of the Institute, tried in vain to straighten his clothes and made a show of limping off into the distance. He didn’t dare break the illusion that the rough treatment he’d received had caused him real harm.

But as soon as he was around the corner and onto the next city block, Tim found a convenient bench, sat down, and tried to assess his options. Just then, the spatiotemporally enhanced comlink that Alicor had given him began to emit a series of high-pitched beeps. Alicor’s voice on the other end of the temporal divide gave Tim the closest approximation to dread any android has ever experienced. Worse, Alicor’s questions were predictably blunt.

“How’s the mission going?” said Tim. “Right on schedule. My talk at the Institute got, like a, tremendous response.”

“That’s … that’s good news,” said the physics. “Reassuring actually. You see some aspects of our reality have been flickering a bit in the last few blinks, as if the timeline were about to shift. Are you sure everything is OK?”

Tim’s central processors had no trouble grasping the implications of Alicor’s words. if he didn’t make up for the bad start to his mission, there might not be a “present” to return to — or even, perhaps, a Temporal Displacement Engine to travel in.

Might be stuck on this primitive world until it destroys itself with nuclear weapons, he thought.

But there was no reason, his logical mind told him, to jump to conclusions. He did his best to convince Alicor not to worry and decided to head back to his time machine, to strategize. But before he could stand up from the bench, a lovely female with long blonde braids approached him, wearing a drab, dull blue uniform.

“Life can be cruel sometimes, Friend” she said. “Isn’t that so?”

“I should’ve known better than to….” said Tim.

The woman put a soft hand on Tim’s left shoulder

“Don’t blame yourself, Friend,” she said. “The way you’ve been treated is a crime. You look like you could use some soul comfort. Come. I’ll take you to the Mission. You’ll be among friends there. I can get you a decent meal and some new clothes. Later we can talk about starting a new life.”

Tim’s android brow furrowed. With his limited understanding of Greldaar culture, he had trouble evaluating anything his new “friend” was saying.

“I have a mission, too,” he said. “Could someone there help me?”

The woman smiled and stroked his vat-grown humanoid hair.

“You poor lost soul,” she said. “I truly hope I’ve reached you in time.”