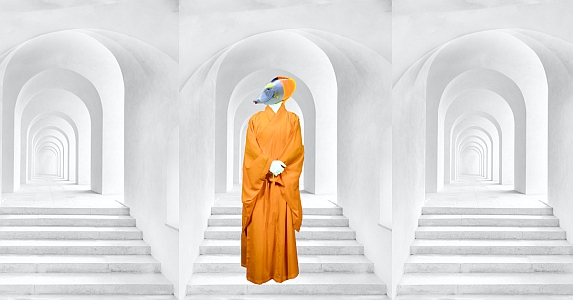 Tim did his best to calm Alcior’s fears but, truth be told, his central processors were also having trouble maintaining equilibrium.

A series of critical miscalculations, it reported, has weakened the established timeline. Barring reversal of this trend, our existence is in danger of being subsumed into General Probability.

“Dude,” Tim told himself, “that’s messed up. Gotta, like, study up on this Greldaar culture.”

The android shifted his time machine into neutral to gain a bird’s-eye view of Greldaar history, from their days as hunter-gatherers, to the start of their first agrarian settlements. Early on, patterns emerged that clearly coincided with the creatures’ neurological development.

The Greldaar are, like, hard wired to swap irrational explanations for whatever they don’t understand,” he thought.

What had been true ten thousand years before was still true. Most Greldaar either believed in some form of magic, or accepted the existence of unproven physical phenomena.

“Like Barbara at the Mission,” he said. That was why, he realized, his “Crusade to Save God’s Planet” had almost succeeded. It was, ironically, the rational part of his argument that made his project fail. Though the Greldaar were eager to accept a crusade from a supernatural being, they were unable to accept either unfamiliar scientific data, or novel ways to interpret their own findings. For some Greldaar, Science itself had become a religion with rigid tenets.

Went too fast, he realized. Worse, he had to overcome the Greldaar’s contradictory fears: The fear of not knowing and the fear of gaining new knowledge. The humanoids were more comfortable clinging to traditional, yet unsatisfactory half-truths than they were with stretching their grasp of established facts. Underlying these anxieties was the fear of being deceived.

In fact, the more deeply Tim studied the Greldaar psyche, the closer he came to a depressing conclusion.

These guys are, like, way into fear, he thought.

Throughout History, fear influenced every decision even when scientific evidence was abundant, clear and conclusive. How in the world could he convince them to revamp their energy systems in time to avert climate disaster? The only option, it seemed, was to go back in time and establish care for the environment as a core value of every civilization on the Greldaar homeworld. There was just one problem.

“I’m, like, totally not programmed for that,” said Tim to the Temporal Displacement Engine’s rounded inner chamber. He would have to seek the help of the Quitheron Programmer, known as Jilitra Krythantrex. But where to find this elusive female? According to the time machine’s resident AI, Jilitra was last sighted in the Walchnani Sector, approximately eleven hundred parsecs from his current location. But that sighting had occurred some nine hundred and twenty-five years before Tim left Doradahr to begin his mission.

Could the Quitheron Programmer be as much of a myth as the many Greldaar legends he’d recently studied? Fortunately, a time machine is a handy device to have when you want to confirm an ancient myth. After pausing just long enough to plug himself into the machine’s android charging station, he set the appropriate spatiotemporal coordinates and set out. Yet so distant was the Quitheron’s lab, it was a full eight hours before the complex device materialized in front of a magnificent, white tower offset from a nearby cliff by only a few hundred meters. The time machine’s main vault opened and Tim hurried out toward the tower’s main entrance. Before he could press what appeared to be a signaling device, a sultry voice oozed out of a PA system just above the entryway.

“My goodness, what a grotesque piece of junk you are,” said the voice. “I detect at least twenty-five hundred programming errors without even examining you. Let me guess: Doradahr?”

Tim stepped back as the tower’s entry portal swung out toward him on a cantilevered hinge, Though this was hardly the reception his programming had led him to expect, at least he’d made a tad more progress toward his goal. Or so it seemed.

Once inside the tower, the android was whisked up several floors by a pneumatic tube system and brought to rest before a pale blue Quitheron female. Like every member of her species, she shared an evolutionary ancestor with her homeworld’s fish. Tim eyed her flowing orange robes with as close to astonishment as his subroutines would allow.

“Right,” said Jilitra. “We’ll start with the head. Be a darling and shuck it off for me, will you?”