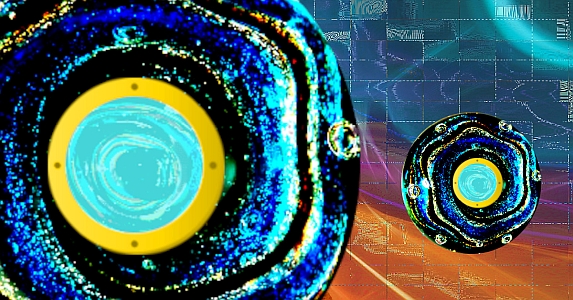 Two days later, Tim’s rebuilt central processors flickered back on and allowed his rebooted consciousness to interpret the data received by his sensors. A moment after that, the android could once again piece together a few coherent thoughts.

He was lying on a stainless steel mobile platform. Though his first impulse was to sit up, he realized he was strapped down. The artificial skin on his android brow furrowed in response to a suite of facial -expression subroutines. He looked left, where Jilitra Krythantrex stood, watching over him.

Tim’s machine mind stalled. No one had ever asked him that question.

“Augmented,” he said. “Processing speed exponentially increased. Sensitivity to spatiotemporal field fluctuations enhanced to operate within a revised range of….”

Jilitra placed a pale blue hand on Tim’s right forearm and gave it a squeezed.

The android, was startled to realize that his upgraded mind also had access to a vastly more complex set of emotive subroutines.

“But it’s a good kind of confusion, isn’t it?” said Jilitra. “You have sensations you’ve never experienced before. Intriguing, no?”

Previously, Tim would have pointed out that being intrigued was outside his operating parameters, but for the first time, Jilitra’s question had real meaning.

“Want to, like, explore the entire universe,” he said.

“That’s what I love to hear,” said the Quitheron. “All right, I think you’re ready to be released.”

A graceful hand gesture later, the restraints slid off Tim’s arms and legs. He sat up.

“Humility, my darling,” said Jilitra. “I may be the greatest android specialist in the universe, but I do make mistakes. And frankly, your original Doradahr configuration was seriously messy. Were you thrown together from spare parts?”

Tim shook his head. He was used to thinking of Alicor as a brilliant Doradahr physicist. Were he and his team just a bunch of hacks?

“Of course you do, Dear,” said Jilitra. “That’s what’s so charming about androids. You’re all so dedicated. Yes, you’re cleared to leave. But one word of advice. To accomplish the ambitious goal I saw recorded in your memory bank, you’ll need more than quantum switches and Jalutrian mathematics. You’ll need to look inward, to the emotions I’ve given you. The Greldaar, Beloved, are humanoids, not servicebots.”

Tim nodded, slid off the shiny gurney, and surprised himself by giving Jilitra a warm hug. “Thanks for everything,” he said softly.

He turned away and hurried into the pneumatic tube system that would take him back to the white tower’s ground level. He ran out of its arched entry and entered the Temporal Displacement Engine, where he was once again surprised by the impact of his new updates.

Shoddy workmanship, he thought, as he glanced around the Engine’s command center. But, he realized, there was no time for day dreaming. He entered a new set of spatiotemporal coordinates that would place him approximately twelve thousand years before his first frustrating encounters with the Greldaar. Then he engaged the time machine’s chameleon circuits.

As a result, the seriously futuristic device blended in with the local environment and became invisible. On its internal view screen, Tim saw a small settlement of low, boxy buildings of mud and straw. Narrow ladders, hacked out of tree branches and lashed together with vines, were propped up against them. The eight buildings were arranged around a central courtyard, in which carefully tended crops grew. There were rows of crossbred grains, beanstalks, tied with twine to narrow sticks, and clusters of tuberous plants. To the west, the sound of plaintive bleating suggested a shepherd tending a herd of ruminants.

Have to get this right, thought Tim.

He consulted the time machine’s historical data and dressed himself in a combination of rough, woven wool and animal skins, which he replicated on the spot. He also added a long wooden staff, topped with a small blue glass globe — and stepped out into the tiny village. To its inhabitants, it appeared that Tim had simply materialized from the air.

“Greetings, my children,” he said. “It is I, Negute, healer of worlds. I will show you the ways of caring for the land, the air, the waters and the animals. It is the will of the Sun.”

As one, forty ancient Greldaar fell to their knees, their limbs shaking.

“Teach us thy ways, your Wisdom,” they murmured.