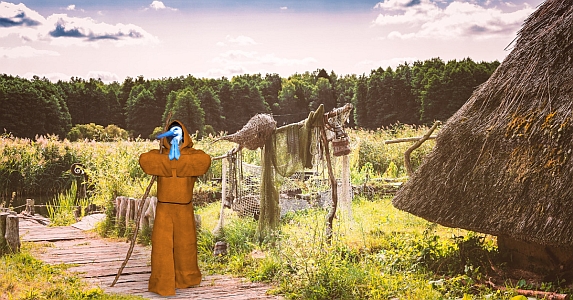 Though mindful of the risk, Tim returned to the present, confident that he’d given the Greldaar a chance against the Tellurians. In phase one of his plan, he used the chameleon circuits of his time machine to create a spectacular holographic display in space. To the unsuspecting Tellurians, it looked as if a fleet of menacing, unmarked battle cruisers were closing in for a major assault on Tellurian installations across the planet.

The Tellurians immediately mounted a pointless counteroffensive against the illusory fleet. While they were distracted, Tim sent a simple message to the ever-faithful Greldaar, over the planetary communication system.

“My children, your destiny is at hand!”

As previously arranged, this coded phrase told a select group of humanoids to descend into a planet-wide network of underground bunkers. There, following Tim’s instructions from two generations before, construction had begun on nearly four hundred squadrons of advanced-design automated ships. Now, at his command, an elite Greldaar force used the training they’d received and passed on for decades to launch the ships, which were armed with a full range of tactical weaponry.

Within an hour, the automated ships carried out deadly bombing raids on Tellurian installations on all six continents. On and on they pressed their attack, dodging Tellurian defensive missiles and, once the enemy finally caught on to Tim’s deception, incoming assault vehicles returning from space.

Though the Greldaar bombing raids were devastating, Tim had left nothing to chance. During his last visit to the Past, he’d also made sure to plant explosive charges deep underground at sites where, decades later, he knew the Tellurians would construct a major military base or administrative center. Now, in the heat of battle, he detonated each charge. But instead of exploding, they released toxic microbes that, while harmless to the Greldaar, was fatal to the Tellurians.

As a consequence, in less than a week, the occupying Tellurian forces were decimated. With damages to the Greldaar at the absolute minimum, Tellurian surrender followed soon after. And once they saw the devastation wrecked on the Tellurians, the other alien intruders who’d made inroads into Greldaar society sold their holdings at a loss and vacated the planet as soon as possible. The nightmare of military and economic tyranny was over.

From here on out, it seemed to Tim, the Greldaar would be able to handle their affairs on their own. He had accomplished the mission he was originally designed to fulfil by the Doradahr. Greldaar Prime was ecologically balanced, and its people were secure. With the values Tim had instilled in them from their earliest beginnings, they seemed poised to continue on a steady course into the far future.

On that basis, Tim decided his best option was to say farewell to his “children” and return the Temporal Displacement Engine to Alicor as instructed. But when he stepped out of the time machine into the location where he expected to find Alcior’s laboratory, he saw a crude village of mud huts and tiny plots of scraggly grain, interspersed with legumes and tuberous plants.

In the near distance, an elderly male Doradahr approached, leaning on a staff of polished wood. Though Tim’s sensors recognized him as Alicor, it took a major bypass of his cognitive systems for him to avoid a major shut down. The Doradahr’s voice was frail and scratchy.

“You!” said Alicor. “You were gone such a long time. Whatever you did, you fool, you altered the timeline so Doradahr descended into endless civil conflict. Now there’s nothing left. I’m the only one who remembers. And it’s all because of you! What do you have to say for yourself?”

Tim shook his rewired head, waved Alicor away with both hands, stepped back into the time machine and set out again for the region outside of Time where he’d always done his best thinking. Based on what he’d just seen, there was no way to restore Doradahr society without causing havoc in some other part of the universe. And, come to think of it, what other worlds besides Doradahr had been altered by his efforts to save Greldaar Prime?

“Meddling in the destiny of other worlds is invalid,” he said. “Mission aborted.”

Now for the last time, he reset the Temporal Displacement Engine’s coordinates. A moment later, he and machine materialized inside the star at the center of the Doradahr system and vaporized.

But Tim’s influence on the History of the universe lived on. A century later, an exploratory expedition from Greldaar Prime discovered sentient life on Doradahr. Once they saw the pathetic state it was in, the Greldaar sent an android away team to offer the inhabitants the assistance and training they needed to build a better life.