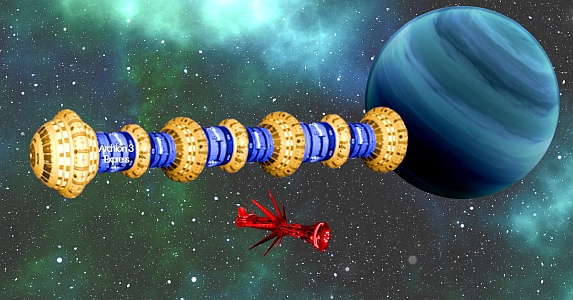 The commuter shuttle between Archion 3 and the Geliatra asteroid belt was the lifeline of Validoor Sector’s burgeoning business juggernaut. For the past seventy-five years, entrepreneurs from every major industry had depended on the shuttle’s unbroken record of reliable service.

Among the thousands of commuters who boarded the short-range space folder four days a week, Beliaz Grymithol was one of the oldest. Year in and out, the blue-skinned craftsman plunked his rounded frame down in his compartment. He’d doze, lose himself in a holopuzzle — or tap at a virtual keyboard, in a frenzy to meet a looming deadline.

Though age had introduced a few discomforts, he could easily afford a private compartment, complete with food and beverage replicators, an entertainment center and a small cot. That had made the three-and-a-half-hour trek bearable, especially now, when his third left tentacle had started losing its elasticity.

“Age-related,” his physician had told him. But Beliaz knew better. It was a case of the drolyth, as sure as the boiling point of helium was minus 268.9°C. His mother had had it, and so had her uncle. Of course, by Beliaz’ time, nanobot-repair protocols had been developed for millions of disease states, regardless of species. The only barrier was cost. Did Beliaz really want to fork over management of his entire estate to the government just to regain the use of one tentacle?

“Other seven work fine,” he grumbled whenever the topic crossed his mind.

Besides, with or without his third left tentacle, he could still create the magnificent one-of-a-kind pottery that sold at very good prices on the interstellar market. And that was aside from the commercial designs he licensed to high-end department stores in the Treliadror, Hechal and Grimdaar systems.

So, all told, this was another in a long chain of typical days that stretched back farther than Beliaz wanted to remember. As always, he’d parked his capacious backside on the compartment’s cushy banquette — but not before replicating an aromatic cup of “grethlym.” Given the difference between Beliaz’ olfactory system and that of the average humanoid, grethlym occupied a taste niche analogous to hot chocolate. To Beliaz, it was the essential ingredient of any perfect morning.

But the universe has no tolerance for self-satisfied perfection. In hindsight, the seventy-year-old sentient cephalopod realized that he should never have been so startled by what happened next. At the time, however, the sudden jolting shock that rocked the shuttle nearly sent him sprawling. Thankfully, between his seven functioning tentacles and the handholds that dotted the walls of his compartment, he avoided smashing his bulbous head on the shiny, pale-yellow floor.

A brief moment later, the voice of the shuttle’s android conductor crackled over the comsystem.

“Ladies and Gentlemen,” it said. “At this time, we have taken weapons fire from an unmarked vessel, whose configuration suggests origins in the Jatheralin system. Please remain seated until further notice.”

Lately, a series of newsnet articles had chronicled accounts of marauders who struck out randomly at commercial space liners. But why would thieves attack this decidedly unglamorous commuter line? The answer would have to wait. A second jolt to the ship made Beliaz lurch forward.

Meanwhile, in the distance, raucous shouting mingled with an ear-piercing squelch from the comsystem. The shouting intensified and was accompanied by the sound of heavy boots thumping along the ship’s corridors. Soon after, his compartment door was rattled by steady pounding. A bearish voice called out.

“Beliaz Grymithol!” it said. “Come out, or we’re busting in.” “Who the crackling solar flare are you?” Beliaz shouted back.

The door crashed open and a pair of muscular reptilians stormed in, each wearing facemasks: one brown, one green. Their shiny black encounter suits were almost as intimidating as their enormous late-model particle rifles.

Beliaz nodded, too stunned to speak.

“But why?” asked the puzzled cephalopod.

“High Priest if the temple at Galuri Oreck?” asked Beliaz. “You aren’t even Galuri. And what does he want with me?”

“We’re mercenaries, duh,” said Green Mask. “And you’re about to earn yourself a special blessing — unless I happen to find you dead at the hands of the Caliaphon’s enemies.”

“Just asking,” said Beliaz. “No need to get snippy.”

The two burly soldiers led him out of his compartment and straight to the ship’s barely adequate docking bay. Once inside the intruder’s ship, Beliaz was strapped into an acceleration chair. Green Mask sneered.

“Enjoy the ride, Oldster,” he said “And thanks for flying Pirate Spacelines.”

The gales of hooting laughter that echoed around the ship gave Beliaz a splitting headache. What, he wondered, had happened to his quiet, normal life?