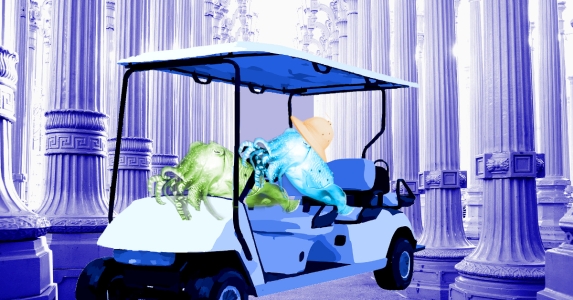 Ambassador Frenzhal led his fellow cephalopod to small electric cart, which he drove out of his mansion’s entryway into a high-vaulted laboratory. As they rode past rows of computer servers and a host of other gadgets that Beliaz couldn’t identify, he wondered aloud how his life could have gone so wrong.

“Entropy,” said Frenzhal. “You’ve fallen victim to the essential randomness of the universe. It was a compensatory measure, I’m sure. Judging from your manner, I assume you must have been leading a frightfully regular life.”

Beliaz squeezed his round eyes shut.

“You’re saying I brought this on myself?” he asked.

“Not you alone,” he said. “Sentient civilization now stretches across wide swaths of space-time. The accumulation of billions of excessively predictable timelines puts an enormous strain on the Continuum. Like all natural phenomena, Time thrives on a sort of baseline fluctuation. So maybe you see now where your life-choices have led you.”

“There’s no need for guilt,” said Frendel. “Ordinarily, Time resets with no fuss at all. But that wretched time loop warped the Cosmos. Not to worry. We’ll get things sorted out.”

Beliaz wanted to know how space-time itself could be “sorted out” by a couple of aging cephalopods. Before he could ask, the Ambassador stopped in front of a broad, multicolored control console. Frenzhal disengaged the motor, leaped out of the cart and scurried over to the gleaming device. He motioned for Beliaz to join him.

“This is the Transient Incident Concatenating Temporal Ontology Collider, or TICTOC for short,” he said.

“You can repair my timeline with that?” asked Beliaz.

“We can,” said Frenzhal, “once I have the benefit of your insight.”

“All I know,” said Beliaz, “is that some fools created a time loop so they could achieve immortality. That’s just wrong. But so is this mixed-up place. Whatever the humans are, they don’t deserve to live like this, just because of Dretholien’s greed.”

“Fascinating,” said the Ambassador. “It obviously hasn’t occurred to you that Dretholien’s people were the humans in your universe. She told you they’d disguised themselves as Galuri. When you broke the time loop, Reality reset itself and the humans reverted their original shape.”

“But did Dretholien speak for every human?” he asked. “Were they all so insane?”

“That depends on which humans you mean,” said Frenzhal. “If we investigated them in every conceivable metaverse we’d be here until the Big Crunch. Come on, you have to decide.”

Beliaz tapped the tips of his top two tentacles together.

“Well, because the time loop is gone,” he said, “the humans’ selfishness is gone, too. Can’t we cut them a break and repair the timeline without making them suffer?”

“You want a compassionate solution,” said Frenzhal. “I wish the universe worked that way. But once an imbalance occurs, reestablishing equilibrium involves some kind of sacrifice.’

“Like when the clay fatigues on my potter’s wheel,” said Beliaz, “and I have to alter my design slightly.”

“I knew you’d understand,” said the Ambassador. “If you want to spare the humans, you’ll have to give up something.”

“I have chronic pain in my third left tentacle,” he said. “I could give that up.”

“Clever,” said the Ambassador. “The laws of physics don’t require you to sacrifice something positive. I’ll enter that into the TICTOC and … yes … that works. Still, I warn you, every change comes with consequences.”

“I’m not at liberty to divulge such things,” said Frenzhal. “No. I cannot violate official protocol. Shall I proceed?”

“My appearance, my home and this device are telepathic constructs,” said Frenzhal. “Though I appear powerful to you, know that the timeline is driven by causation and causation by action. I myself can do nothing, I simply am. So, what do you say?”

“Go ahead,” he whispered.

The Ambassador appeared to enter a series of commands into the illusory TICTOC and suddenly Beliaz was sitting inside the same commuter shuttle he’d entered the day he was captured by Caliaphon’s mercenaries. Still a bit stunned, it was a few minutes before he realized that his third left tentacle no longer hurt. A few minutes later, he finally noticed that, as a human, he had no tentacles at all.

Unforeseen consequences, he told himself. I wonder what else….

The door to his car opened and in walked an adult male cephalopod, accompanied by his young adolescent daughter.

“Is this the shuttle you take to work every day, Daddy?” the teenager asked.

And so it was that a major entropy transfer shook up the timeline of a complacent craftsman. Beliaz stared down at his peculiar human hands and smiled. Under each fingernail was the scratchy residue of potting clay.

Wonder how much for a private compartment, he thought.