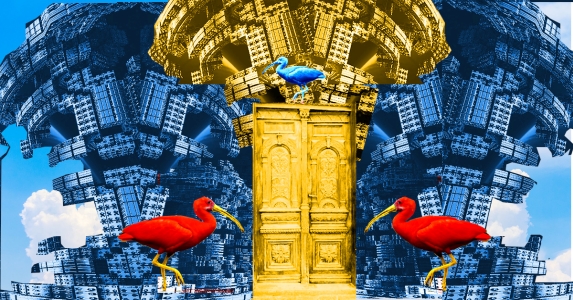 The mercenaries’ ship was crowded, smelly and certainly didn’t offer inflight meals. Yet despite being ravenous, Beliaz didn’t dare ask for food. So after hours of silent suffering, the weary Cephalopod was relieved to hear the ship’s AI announce:

At least, he hoped he could expect better treatment from the Caliaphon Dahlatri. A short time later, he was released from his chair, shoved into a lander and delivered to a team of robed Galuri disciples on the planet’s surface. Though their vestigial facial feathers were an odd sight, he was too overjoyed at his release from captivity to care.

The younger of the three disciples swiped a credit tile over the outstretched palm of the mercenary captain. The latter gave a mocking bow and walked backward up the gangplank of his lander, bobbing his head as he went.

“Tail-wagger,” the young Galuri muttered. That earned him a stern rebuke from the elder of the three disciples, whose slightly stooped posture brought his avian evolutionary ancestry to the fore.

“Besides showing disrespect for one of Validora’s children, blessed be they all, you have neglected our guest.” The twenty-something fell to his knees before Beliaz’ six lower tentacles.

“Forgive me, Master Grymithol,” he said. “I acceded to the rule of Rage.”

“I understand,” said Beliaz. “Now, before I meet his Holiness, do you suppose I might have something to … to.…”

The three Galuri jumped back as Beliaz collapsed to the landing field’s gray, heat-resistant surface. Hours of cramped confinement had taken a toll on his aging body — which hadn’t missed so much as a midnight snack in the last forty years.

At mid-afternoon, Beliaz awoke on a downy mattress, in a guest house on the grounds of Hralthan Tropei, the Serene Residence of the Caliaphon Dahlatri. Startled, he pulled himself up and glanced, groggy-eyed, at the wizened female monast who sat motionless in a chair woven out of stiff, bent reeds.

She picked up a small handbell from a side table, gave it a ring and stood up to exit the room. Beliaz heard a resounding handclap and a moment later, the young male disciple who’d greeted him at the spaceport entered his room, wheeling a serving cart. Though Beliaz pined for fish, the smell of yogurt, grains, and leafy vegetables was intoxicating.

“The Caliaphon expresses his regret for your ordeal,” said the disciple. “But is overjoyed at your arrival.”

Preoccupied with eating, Beliaz merely nodded — until he remembered the roster of customers he’d left in the lurch hours ago.

“Do not be concerned,” said the disciple. “We have informed all of your business contacts of your temporary indisposal.” Beliaz’ mind reeled at the thought of what this young whelp might have told them. but saw no advantage in protesting.

“I’m concerned only with knowing what His Holiness must want of me,” he said.

“As are we all,” said the disciple. “This way. You may call me Nacliadro.”

The young Galuri opened the bedroom door and motioned for the puzzled cephalopod to follow him. Once out of the guest house, Nacliadro led Beliaz across a polished black granite courtyard, along a graceful gallery and over to the high twin doors of the main temple.

“The Caliaphon will join you shortly,” said Nacliadro. “I must go, for I have not yet earned the right to be in His presence. ”

He gazed, open-mouthed, at his surroundings. How, he wondered, had this ancient site survived? A loud creak to his right snapped his head back to the temple’s oversized double doors. In the soft afternoon sun, the gold leaf on the pivoting doors sent light bouncing this way and that. And there, in the threshold, stood the Caliaphon Dahlatri himself, swathed in varying shades of purple silk.

“Welcome,” he said. “Though you will one day enter the realm of eternal joy, I regret that the urgency of my need has caused this temporary disruption.”

Beliaz smiled. Gracious apologies aside, he realized he was dealing with a being capable of kidnapping him on a whim. He stepped into the temple, tentacles quivering.

“Pleased to be of service, Your Holiness,” he said. “If I may ask…”

“Straight to the point,” said the Caliaphon. “Just like Validora herself.”

Without another word, he led Beliaz to a large, ornate room off the temple’s main corridor. In its center stood a large glass case, nearly two meters tall. Its interior was littered with ceramic shards.

“This, Master Grymithol,” said the priest, “is what remains of our most sacred treasure: The Chalice of Knorpelthion. I believe only you can replace it.”

Beliaz counted to eight. This robe-wearing relic of a different millennium had dragged him across space-time for a repro-job? A holographic printer could have taken care of this assignment in less time than it would take a Joulenese python to digest a Sardaxian sow.

“If you have image files of the object,” said Beliaz, “I can work up a replacement in a seven or eight rotations back at my atelier. Why don’t you send them now? I’ll give you the transmission link and one of my assistants can start plotting it out. Then when I arrive….”

The Caliaphon’s face clouded over.

“You misunderstand,” he said. “I do not require a replacement. I require the original, made by yourhand.”