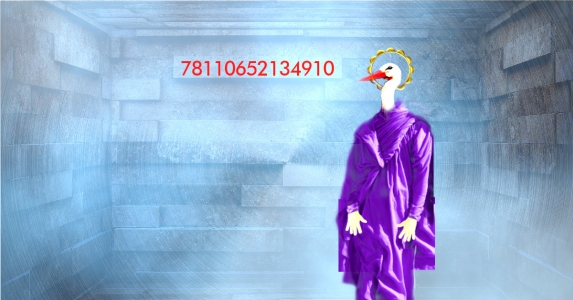 As astonished as Beliaz was, he managed to keep his voice steady.

“It embarrasses me to say it, Your Holiness,” he said, “but I’m not sufficiently enlightened to understand you.”

For the first time since they met, the Caliaphon’s legendary composure dissolved into laughter.

“Celestial Realms!” he said, “the look on your face. Come with me.”

The tall Galuri turned away in a swish of silk and hurried out of the chamber. His head in a sweat, Beliaz hurried after him, though he longed for all the world to slip out a side door and hop an express transport home.

As the two mismatched creatures navigated the Temple’s zigzagging corridors, Beliaz craned his short neck to take in every glittery detail. The wealth required to build such a jewel-encrusted structure, he realized, must have been enormous. But it wasn’t until they reached their destination that Beliaz could fully appreciate the scope of his captor’s wealth. As they rounded the last corner, they came to a gleaming. high-tech vault, whose status displays flickered with a host of unfamiliar characters.

“You are blessed,” said the slender religious leader. “Only a select few have seen the Chamber of the Ancients. Fewer still have entered it. Stand back.”

Beliaz watched as the Caliaphon threw back his head and shouted,

The vault’s complex digital displays whipped themselves into a frenzy, flashing on and off in a dizzying swirl of colored light. A high metallic scraping sound rent the air briefly, before the vault’s impossibly thick door swung out slowly towards them. As the opening widened, a mysterious royal blue mist poured into the corridor. The Caliaphon motioned Beliaz inside the vault.

“This,” he said, “is a gift from the ancients. They were wise in ways you cannot imagine. Yet their wisdom led them to hide the deepest secrets they uncovered.”

“Will it help us retrieve the … the Chalice?” asked the aging Cephalopod.

“Not retrieve,” said the Caliaphon. “Create. This, Master Grymithol, is what common folk would call a ‘Time Machine.’ A vulgar phrase, by any reckoning, but essentially correct.”

Beliaz’s heart sank as he listened to the dignified religious leader dish out what sounded like pure crazy talk. The large, shiny chamber, supposedly, would transport him both thirty-five hundred years into the past and four-hundred kilometers to the south. At the end of his journey, he would step into the world of “the ancients,” and begin work on the Chalice of Knorpelthion. By now, Beliaz’ third left tentacle was throbbing mercilessly

“You must mean re-create the Chalice, Your Holiness,” he said.

“As always,” said the Caliaphon. “I know what I mean. The nature of the Divine is such that there are many paradoxes. Even the most devout cannot resolve them all. Though Validora, blessed be her name, has granted me more insight than most, I do not claim to understand this mystery. However, it is written that the Chalice was the work of an off-worlder of extraordinary skill, whose tentacles flowed over the sacred clay like oil over water. You, Master, are the only one who can fulfill this prophesy.”

Beliaz gulped. The Celiaphon obviously believed every word he’d spoken. Too bad it made no sense, including the part about a “prophesy” being fulfilled in the past. All the same, he hoped that if he played along, his host would move on to a new obsession. Yet the Caliaphon’s enthusiasm for his bizarre plan continued to mount. With a ceremonial flourish, he pulled a silvery data cylinder from the inner folds of his robes.

“You will depart at once,” he said. “This cylinder itemizes the Chalice in every detail. Dimensions, materials, inscriptions, glazes and so on.”

For the second time that morning, the Caliaphon’s belly laugh resounded through the Temple.

“Your sense of humor is rare, indeed,” he said. “The ancients will provide everything you need to create the Chalice. If, after spending a few days in that blessed era, you still wish to return, they will be glad to help you — after they have transmitted the completed Chalice to me.”

“How exactly does this … sacred device …. work?’ he said.

“Leave that to me,” said the Caliaphon. “And know that your service will be appreciated by the Faithful for thousands of years.”

Alarmed, Beliaz watched His Holiness dash out of the vault and enter a series of commands into a keypad near its threshold. Immediately, the vault filled with the same blue mist he’d seen before. As he gradually lost consciousness, he heard the Caliaphon exclaim,

“May the glory of Validora radiate through every pore of this noble being, in reward for his sacrifice!”