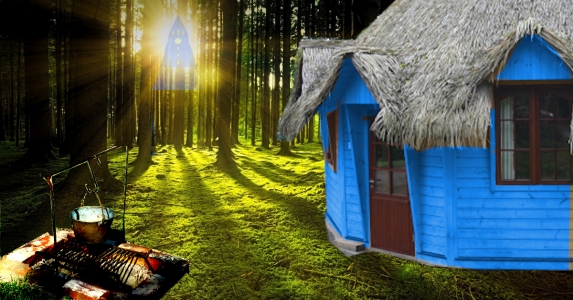 Seconds of subjective time after the Caliaphon Dahlatri had sealed Beliaz into an unknown ancient device, his round eyes looked out into a darkened room. But was It a room? As he stood up from what had been the temple floor, he heard a faint chirp.

Insect? Amphibian? Bird? He struggled to identify the sound and correlate it with the damp breeze that brushed his face and brought with it an assortment of musty odors.

“A rainforest?” he whispered.

He was supposed to have arrived at a bustling metropolis, the seat of an advanced culture. But this was the very definition of “nowhere.” Tentacles trembling, he took a few steps forward — and felt a shadowy object whizz past his right ear. He stopped dead and heard a dull thud, as if the object had hit a tree not far behind him. A high-pitched voice called out

This was obviously a language that Beliaz’ advanced-design translation implants hadn’t heard before. Theoretically, the translation AI would pick up the required syntax and vocabulary after only a few hours of exposure. Assuming, that is, he survived that long.

All the same, he understood. He was to stay put until further notice — and he didn’t wait long for notice to arrive. A new, deeper voice rang in his ears at close range and his top two tentacles were gripped by rough-skinned hands.

“Alchiar,” said the deep voice. A slight tug on both sides told Beliaz he was meant to walk forward. The hands tugged harder.

“Na tria vecrez,” the higher voice chimed in. Beliaz felt the grip on his tentacles loosen.

Together, he and his captors plodded, along a rough-cut path through what felt like jungle terrain. That’s not to say that Beliaz, in all of his seventy years, had gained direct experience with tropical ecosystems — unless the occasional nature holovid counted.

Some ancient civilization, he thought.

Yet after an hour of trudging, the arrival of a pinkish-yellow dawn gradually lifted his gloom. In the near distance, he saw campfires and, on the horizon, a soaring tower. But the first stop on their journey was a more modest structure, about a hundred meters to his left. By all appearances, it was a private home. By the standards of the surrounding camp, however, it might as well have been the palace of a great feudal lord.

At first glance, Beliaz wouldn’t have been surprised if the broad, squat house were merely a hallucination. But, after a few minutes more, his escorts led him to the structure’s carved wooden door.

“Drelast,”said a high voice to his left.

For the first time, Beliaz’ fear lifted enough for him to give his escort a good look. All this way, he’d been in the company of three bird-like creatures, dressed in a strange amalgam of woven reeds and fresh leaves. They each had a wooden bow with a gut string slung over one shoulder and a quiver of arrows over the other. The female, her eyes soft and encouraging, repeated her command.

“Drelast,” she said again, and pushed the door open.

Beliaz nodded and dragged his tired body up two stone steps and through the open door, which closed behind him. A tall being, reminiscent of the Caliaphon, greeted him with a deep bow.

“You, I assume, are Master Grymithol,” he said. “Validora be praised. I never imagined that I would be the one to welcome you.”

His host chortled softly and explained that while “the common folk” spoke the local patois, he had studied the language of the ancient scriptures. Apparently, it had survived into Beliaz’ own time and been assimilated by his translation grid.

“Or is it evidence of divine provenance?” asked his host. “But let us not dawdle. I am Reahidor and I will guide you to the temple workshop, where you will create The Chalice of Knorpelthion. But I see something troubles you. Please, share your burden and feel the healing grace of Validora.”

Beliaz bowed his head. The last thing he wanted was to prolong his visit with idle chatter. But there was no stifling Reahidor’s well-intentioned gesture of concern.

“Who, among these people,” he asked, “built the time machine that brought me here?”

The ancient Galuri giggled as if he’d just been poked in the ribs.

“Oh, forgive me.” he said between gasps. “It is written that the Master would be prone to bouts of mischievous humor, but I never dreamed I would experience it first hand. ‘Time machine!’ Oh, that is priceless. But come along now, Master Grymithol, the prophesy awaits.”

Beliaz smiled, but as he followed his host out of the house toward the distant tower, he couldn’t help wondering how much stranger his day could become.

“With luck,” said Reahidor, “we will arrive in time for you to perform the ritual sacrifice yourself, as it is written.”