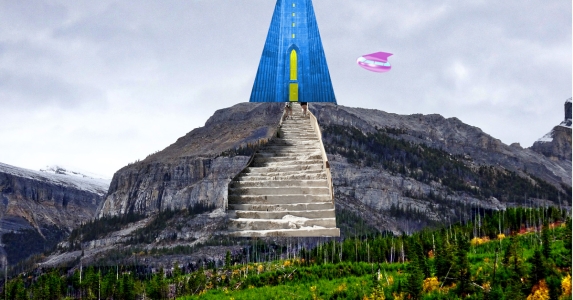 The route to the distant tower led Beliaz and Reahidor through jungle overgrowth to a small village at the base of a hill. From there, a steep flight of stone steps paved the way to the tower’s imposing entrance.

“Sorry, Your Holiness,” said Beliaz, “but I’ll never be able to climb those stairs.”

Reahidor’s face lit up with a broad grin.

“Oh, now the Master tests me,” he said. “But I am aware of every blessing that Validora bestows on her children. Draahcria Rhelesh Travahl!“

A deep vibrating rumble at his feet made Beliaz jump back. The ground shook, dried mud and bits of underbrush flew into the air and a hidden door slid open. Beliaz heard a slight hum and the next thing he knew, a shiny lavender hovercar rose up to greet them. At Reahidor’s command, the vehicle settled to the ground and its twin doors swung open.

The aging cephalopod wiped a particle of sand out of his left eye and complied. Inside, the lush interior of white leather and hardwood trim gave the car an air of luxury. Once Reahidor was safely ensconced, the hovercar rose steadily and soon cleared the top of the stony flight.

The car revolved until the door on Beliaz’ side faced the broad landing area in front of the tower. He stepped out and gazed up at the tower’s imposing golden doors, a carbon copy of those of the temple at Galuri Oreck. Soon, Reahidor joined him.

“The Elders will be overjoyed to see you,” he said, “though I regret to say that we have missed the ritual sacrifice.”

Beliaz nodded. As far as he was concerned, the less said on that subject the better.

“Which way to my atelier?” he asked.

Reahidor gave him a quizzical look, then nudged him into the temple’s great hall. But instead of the jewel-crusted ritual space that Beliaz expected, he saw a bustling scientific complex.

“Yes,’ said Reahidor, “it is impressive, isn’t it? I never tire of this glimpse of Validora’s eternal reward. Here, now, on your right, is Akara Caliaphon Dretholien, who will oversee the completion of the Chalice — at your direction, of course.”

Beliaz watched as a young female Galuri walked briskly in their direction. A flustered Reahidor made a quick introduction and then backed away, his head bowed in deep reverence. Once he was out of earshot, the Akara Caliaphon, who looked no more than thirty, let out a jovial chuckle.

“I’ll never get used to that,” she said. “but considering how my superiors have cowed these beings, it’s inevitable.”

Dretholien gathered up her silky robes, led him to a shiny maglev lift and pressed “up.”

“The truth is, we’re an occupying force in disguise,” she said. “Your next question is why we haven’t improved the lot of this world’s inhabitants. But in fact, we have.”

As the lift car rose, Dretholien explained that her species had rid the indigenous population of every infectious disease. They’d also tinkered with the biosphere to eliminate all food-based causes of cardiovascular illness, diabetes and a host of other conditions. On top of that, a continuous series of subliminal stimuli, distributed through microwave transmitters, had reduced the incidence of several types of mental illness.

“The Galuri are healthy, well-adjusted and have good nutrition. Systematic weather control ensures they also experience neither severe wind storms nor drought.”

“Excuse me,” said Beliaz, “but it sounds like you keep these Galuri as pets.”

The doors of the maglev lift slid open and Dretholien ushered him out into a room just as imposing as the main hall.

“That is all we can do for them, until their culture matures,” she said. “Delivering advanced technology to preliterates would be a disaster. But whereas we can debate sociology endlessly, we now have a limited frame in which to reinitialize an essential Time Loop.”

“You interfere with Time?” said Beliaz. “Who are you?”

Dretholien placed a balled fist on each hip.

“Why is that your concern?” she asked.

“Because at my age, I won’t do anything I don’t believe in,” said Beliaz. “You went to a lot of bother to bring me here, which tells me your control over Time isn’t as complete as you let on. You need something from me, and you’ve yanked me out of my own era to get it. You owe me an explanation.”

“That’s debatable,” said Dretholien. “But you owe the stability of your entire era to us. If you don’t carry out my orders, your cozy little life will dissipate in a massive temporal anomaly. That’s why we’re here: to ensure Time continues to flow properly.”

“Properly?” said Beliaz. “What are you trying to prevent?”

Dretholien stepped back and pulled a purplish lase pistol from inside her silky robes.