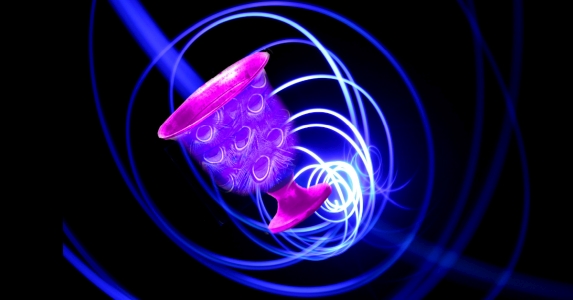 Dretholien continued to hold Beliaz at gun point as she nudged him over to a broad, stainless steel workbench a few meters to his left. Considering her bird-like proportions, he was surprised at how strong she was. But based on what she’d told him, her appearance might well have been a holographic or telepathic illusion.

“What do you mean by ‘extinction?’” he asked.

Dretholien glared at him before entering a series of commands into a small console that was embedded in the side of the workbench. Beliaz gasped, as a reservoir of clay, a potter’s wheel and a suite of pottery tools emerged from its surface. The menacing young female glanced back at him.

“I mean we work tirelessly to ensure our survival,” she said. “From this point forward, a complex nexus of events, if left unchecked, leads directly to our extinction. You are here to bend the curve of history away from that outcome.”

“Not pottery, per se, you idiot,” she said. “The chain of events it initiates. Today, you will create the so-called Chalice of Knorpelthion, as your earlier iterations have done. It will be sent forward in Time to the Caliaphon in your era, who will place it in a large glass case.”

“And that’s what keeps your species alive?” asked Beliaz.

“My patience is not infinite,” said Dretholien. “But know this. A few cycles afterward, a simple seismic event results in the shattering of the ridiculous object. Rumors will circulate that our operatives destroyed it, to destabilize the ruling theocracy on Galuri Prime and pave the way for a political revolution. The resulting outrage will fuel a brutal war of retaliation that will decimate our species.”

“So you intervene — from the past,” said Beliaz, “to replace the Chalice and convince the Caliaphon to stay quiet about it? But how?”

“You old fool,” said Dretholien, “don’t you see that there is little the average sentient cannot be persuaded to do, if the price is right? We arrive at the exact moment when the Chalice is destroyed. We offer your Caliaphon billions of credits to keep his mouth shut and deliver you to us on schedule.”

Apparently, once the fix was in, and there would be no basis for a defamatory rumor against Dretholien’s cohort, the time loop would be refreshed — and they would again skirt certain doom.

“But why a loop?” asked Beliaz. “Why wasn’t once enough?”

“Time, you dreary fossil, is not like clay,” said his host. “It can be shaped, but only temporarily. Sooner or later, events slip out of phase again, and we must reinitialize the loop. In the meantime, we attempt to erase the cause of our demise: a genetic trait that makes the Galuri predisposed to distrust us. They can’t help themselves. The process has taken millennia, but there is hope. The inhabitants of this planet are the distant ancestors of the Galuri. Once we set them on the right path, our work will be done”

“They are an indolent lot,” said Dretholien, “who refuse to obey our strict breeding guidelines. But enough! You will either set to work or I will not hesitate to kill you. And before you ask, know that your clone is already being prepared. Cross me and ‘you’ will die painfully as many times as necessary until you comply.”

Beliaz stared at the heartless alien and shrugged.

“Looks like I have no choice,” he said. “But now I must ask you to leave. I work alone or not at all.”

“I have many more pressing matters,” she said. “I’ll return in a third-rotation and expect to see the Chalice ready for transmission to your era. You’ll find our kilns are extraordinarily efficient.”

The lithe female stormed off in a swish of silk. Beliaz waited until the clip-clop of her sandals on the marble floors died down to a faint echo. With a nod of his bulbous head, he consulted the schematics for the Chalice that had determined the fate of countless worlds for thousands of years.

But was he really locked into this charade? Imagine, attempting to control all of History just to live another century or so? And yet, the idea of his clone weighed heavily on him. What right had he to defy Dretholien, only to sacrifice another version of himself, and perhaps another still?

It was obviously the same choice his “previous iterations” had made — but that hardly made it easier to accept. What he needed, he realized, was a way to follow his orders without really obeying them in spirit. Tears welled up as he studied the holographic diagram in front of him.

“Impossible,” he whined. “And to think, all this work, just so the blasted Chalice will … Wait. What if … what if it doesn’t?”

And in that moment, a devilish strategy took hold of Beliaz’ terrified, yet exquisitely ethical mind.