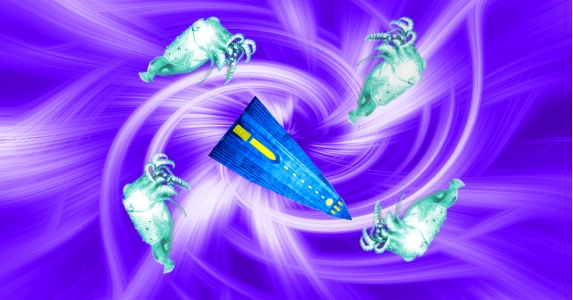 When Dretholien returned to Beliaz’ workbench, her face lit up like a brilliant sunrise.

“It’s a masterpiece,” she said. “Though it does look sturdier than the Chalices made by your predecessors.”

“I suppose I got better with practice,” he said.

“You didn’t alter the specs, did you?” she asked.

After decades of running a high-end pottery atelier, Beliaz knew just how to handle difficult, demanding customers. The tiny shrug of his eight shoulders was the essence of genteel nonchalance.

“I’ll give you that,” said his host. “Too bad it will crumble into shards in a few short cycles. Well, it can’t be helped.”

She clapped her delicate hands in an insistent rhythm. A shiny lavender robotic platform rolled up to them on thin treads. Its top panel slid to the right — to reveal a padded recess, only slightly larger than the newly-made Chalice. Dretholien loaded the Chalice into the platform, which she sent off with a new burst of clapping.

“Later today,” she said, “one of our operatives will depart in a temporal transport unit and reinitialize the time loop.”

“And how will I return to my era?” asked Beliaz.

“Oh that,” she said. “Once the time loop begins, Time will revert to its steady state. You’ll return automatically, with no recollection of your adventures here.”

Only now did he realize the consequences of altering the thickness and contour of the Chalice almost imperceptibly — so that only a horrific seismic quake could shatter it. Yet he hadn’t counted on being stuck in the deep past or being punished when the time loop failed to restart. But if Dretholien suspected Beliaz, it didn’t show in her condescending tone.

“I see from your expression that you, too, feel the daunting majesty to Time,” she said. “And soon you will even witness the overlap of two timelines before they merge into so-called ‘reality.’ Until then, you may join me for the evening meal. Let us celebrate our hard work!”

His stomach churning, Beliaz bowed and turned to follow her to the maglev lift a few meters away. In his haste, he put too much weight on his painful third left tentacle and winced.

“Ah yes,” said Dretholien, “that tentacle. If it weren’t for the time loop, we could administer a stem cell treatment that would restore it. Ironic, isn’t it? Time imposes impermanence on us even as we seek to control it.” Beliaz nodded, but was too preoccupied to speak. Maybe, he thought, his subterfuge would have no effect on the timeline and he’d be in the clear. Regardless, the moment the lift doors opened onto a glittering banquet hall, he was too distracted to worry anymore. Soon, they were seated near the tower’s high windows, with a magnificent view of the rainforest below. Androids served them a lavish meal. After a few sips of a rich, dark purple wine, Dretholien leaned forward and spoke in a surprisingly intimate voice.

“Now that you’ve completed your mission,” she said, “I don’t mind telling you that I wasn’t entirely truthful about our dilemma.”

As it happened, the tower, its equipment and all of its residents existed in a temporal bubble, shifted back several thousand years. That was how they survived each restart of the time loop.

“Excuse me, Your Grace,” said Beliaz, “but what if the Chalice survived the seismic quake. Wouldn’t that prevent the accusations against your people and make … all of this … unnecessary.”

Dretholien gave him a suspicious look, then burst out laughing.

“All of your processors have had a wicked sense of humor,” she said. “But you are by far the most amusing. However, you’re partially correct. If the Chalice survived, that would prevent our annihilation by the Galuri. But it would also alter the timeline. Who knows what would become of us? This way, we know the precise moment of our extinction and can work toward preventing it. That’s an opportunity we can’t afford to pass up.”

Beliaz sipped his own wine.

“Everything around you would vanish,” said Dretholien. “I’d be snapped back to the last days of our struggle with the Galuri, huddling in our last stronghold. Fortunately, it was a scientific complex that enabled us to establish this base and … Wait. I could swear one of the tables is missing.”

A loud crash echoed in Beliaz’ eardrums as the tower began to crumble. Dretholien leapt up from her chair — which promptly disappeared.

“The time bubble is collapsing!” she shrieked. “What did you do? What did you….”

Beliaz never had a chance to reply. Dretholien vanished and with her, the banquet hall’s marble floor. He felt himself falling — accelerating by the second toward the craggy mountain on which the tower once stood.

“This is it,” he whispered. Whether from fear or the raging temporal storm, the aging cephalopod lost consciousness. Plunged into a deep sleep, he nevertheless heard a calm voice echo through his thoughts.