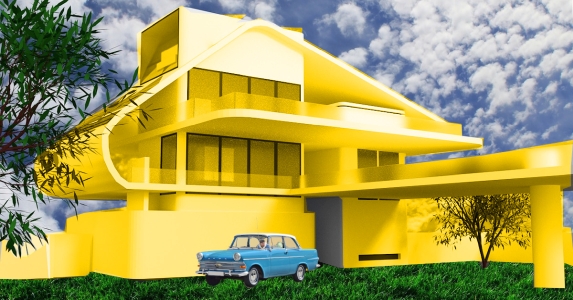 The trip to Ambassador Frenzhal’s house was eye-opening. Though hardly a student of interstellar sociology, Beliaz was sure that Earth boasted a Level 4 society. But based on the condition of Ted’s ground car and the view from its cracked side windows, this version of Earth was nothing like the world Beliaz had expected.

For starters, judging from the car’s foul smell, Beliaz guessed that it ran on fossil fuels. But the scenery on either side of the pockmarked road was even more telling

At least fifteen hundred cycles out of date, he told himself.

Did the disruption of Dretholien’s time loop really have such a cascading effect? Ted’s booming voice from the driver’s seat derailed the aging cephalopod’s train of thought.

“You all right back there, Mister Potter?” he asked. “Sorry I ain’t got a seatbelt that’d fit you. You strapped in, Agatha?”

“Yes Daddy,” said his daughter. “And Mr. Potter is holding on with his tentrickles. Right?”

Ted’s vague answer made Beliaz wonder if his driver had a different, deadlier destination in mind. But about forty minutes later, the ground car slowed to a jolting stop in front of a large, gleaming domicile. In stark contrast to its surroundings, the imposing building reminded Beliaz of the world he’d left behind.

“Where’s the Ambassador from?” he asked.

Ted’s puzzled expression stared back at him.

“Don’t rightly know,” said Ted. “Lord Frenzhal has always been here, since I was younger than Agatha. Never talked to him, ‘cept the once.”

By now, they were walking up a long, paved drive that led to the entrance. In answer to Beliaz’ question, Ted said he’d asked for advice about his daughter.

“My Agatha kept having nightmares,” he said, “about a magic chalice and a mystic tower or some such crazy thing. The Ambassador sat her down in his … what you call a … stabilizer chair. After that, she was fine.”

The metallic door to the huge home loomed before them. A panel near its top slid open to the right. A gynoid face with generic humanoid features stared out at them.

“The Ambassador will see the visitor alone,” she said.

The panel slid shut. Ted shrugged and looked down at Beliaz.

“Guess he was expecting you,” he said. “Good luck — and watch your mouth. C’mon, Agatha.”

Before Beliaz could respond, the door to the Ambassador’s residence swung open.

“Quickly,” said the gynoid, “before the interior destabilizes.”

She ushered Beliaz into a spacious entryway larger than some private homes he’d seen. A grand staircase swept up to his left, like a flock of migratory birds leaping into the air.

“I am known as Joralis,” said the gynoid, “I exist to serve.”

“Is … is the Ambassador home?” asked Beliaz.

A mellow voice greeted him from upstairs.

“In the sense that I’m anywhere,” said the voice.

Beliaz gasped, as his host descended the grand staircase and came into view. Ambassador Frenzhal was a cephalopod, too. Beliaz bowed as gracefully as his exhausted body allowed.

“Thank you, Sir,” he said, “for taking time out of your busy schedule….”

Ambassador Frenzhal’s laughter made him shake so hard that Beliaz feared he might fall down the remaining stairs.

“’Taking Time out’!” he shouted. “That’s so precious! Oh … Oh me … don’t worry, I appreciate the sentiment. Now, by the look of things, you’re one of the few survivors of that infernal time loop.”

“Were there others?” asked Beliaz.

“Yes,” said the Ambassador, “but they underwent a startling transmogrification. You’ve already met two of them. The young human girl is the being you once knew as Dretholien. Her father is a Galuri priest called Reahidor.”

“And why was I spared?” asked Beliaz.

The Ambassador walked the rest of the way down the staircase and planted himself on a graceful, sloping couch without offering his guest a chair. Apparently, because Beliaz broke the time loop himself, he was the only one who could survive its aftermath intact.

“Time is volatile,” said Ambassador Frenzhal. “When the time loop collapsed, your timeline merged with the timeline of a nearby metaverse. The mix-up was so severe, I’m beginning to wonder if Time is managed by a species of indifferent overlords.”

“Not at all, Master Grymithol,” he said. “In fact, I’ve been waiting through the past twelve cycles for your arrival to make things right again.”

“We’ll do it together,” said Lord Frenzhal. “But first, you’ll have to make a difficult choice.”

Though the thought of returning to normal made Beliaz smile, he wondered how, in one lifetime, he’d been called upon twice to determine the course of history.

“The answer is simple,” said the Ambassador. “You have exactly what the situation requires: the soul of a craftsman.”