Against the Glare of Darkness, Book 2 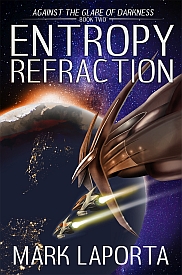 A society in chains. Space-time in peril.
And a smoldering evil on the brink of victory.

The mutant, murderous Quishiks are on the rise.

In ways seen and unseen, the Quishiks have shaped the course of history for ten millennia. Now they threaten an all-out assault on sentient life throughout the universe, and their deadly scourge is soon to ravage an interstellar civilization bound by rigid ideologies and petty taboos.

As this epic drama continues, it falls once again to the retired diplomat, Ungent Draaf, to reset the balance of power. As he continues his galaxy-spanning quest to find the Ootray, whose failed genetic experiments created the Quishiks, the secrets around their disappearance grow more and more convoluted. For the survivors of this ancient species prefer to hide behind an arcane ethical code, and, for humans and symbiotes to defeat the Quishiks, they must first overcome the evil in themselves.

As the eleventh hour approaches and the twilight of interstellar civilization begins, who will find the moral courage to avert soul-crushing destruction?

CRITICAL RESPONSE
If Ungent and Shol thought they'd be off the hook after saving the universe from the Quishik threat probability, the multiple threads of time and space have other plans. The Quishik's prison is hardly infallible(especially when dealing with psychic beings that can harvest brainpower/life), there are others who need Ungent's sage advice, and Shol is trying to endure adolescence trapped on a space craft with a middle-age crustacean and an AI. The mysterious Ootray continue to hold the key to . . . well, everything, but they don't seem eager to be found, even though they're responsible for the biggest threat to all life as the cast knows it. All sentient beings need to band together to face the harsh truth that the Quishiks will be back, but can they overcome personal feelings and deep-seated beliefs to make a final decision? Mark Laporta's Entropy Refraction picks up shortly after the events in book one, Probability Shadow, and continues the complex storytelling of a universe on the brink of destruction ... It is a slow, deliberate read where you step away to mull over the plot before re-immersing yourself. 4 [stars] out of 5.
— Jodi Scaife, Fanbase Press

This is a sense of wonder story and although the author has taken pains to give his characters some depth, most readers are going to be far more interested in the imaginative plot elements, the aliens, and the mystery involving the reticent race. This strikes me as a good book for a hot summer day, but you might enjoy it just as much during the winter.
— Don D'Ammassa, editor of The Encyclopedia of Science Fiction, writing on the Critical Mass website

Laporta’s solid second Against the Glare of Darkness novel sees an old threat reawakened…. [T]he ancient Quishik aliens, who threaten all sentient life by manipulating probabilities and stealing mental energy, have been imprisoned beyond the normal limits of space-time. But now they’re working to break free, evidenced by destructive signs such as gravity distortions and an obliterated planet. The “distinguished crustacean” diplomat Ungent Draaf and his streetwise ward, Shol — a member of a race of oppressed and genetically engineered humans — offer hope by searching for a mysterious lost race called the Ootray, who fought and defeated the Quishiks millennia before…. Ungent, Shol, and the other defenders against the Quishiks remain engaging, with Shol’s discovery of Ootray tech driving the story forward. Fans of the previous book will appreciate the series’s direction. — Publishers Weekly

... a smashing SF world, populated with an incredibly diverse cast [that] combines the best of space opera and SF, by giving readers an entertaining adventure that leaves something a little heavier to dwell on after the last enemy space ship has exploded into the vacuum.
— Jodi Scaife, Fanbase Press

READ MY INTERVIEW WITH AUDERE MAGAZINE