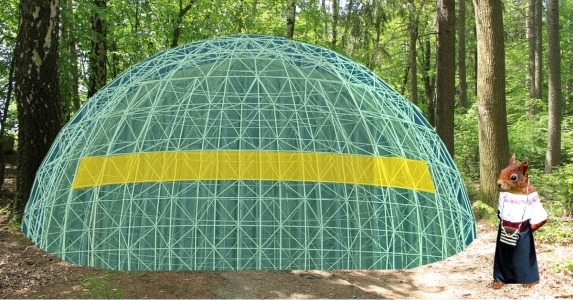 To Calarplis, twilight had always made the Erdamun’s dome look mysterious. By day, it almost resembled a thing of Nature, the way it blended in with the forest. But as the planet’s twin moons began peeking over the horizon, the dome’s winking lights and faint hum proclaimed its offworld origins.

As for the Erdamun himself, he was rarely seen outside, and only in the fairest weather. He would come out briefly, tinker with his machines and scurry back inside, all the while obscured by a dark encounter suit, as if contagion were a constant threat.

But this was the Homeworld, Calarplis reminded herself, the Treasured Place chosen by Nature for the Daalong. What contagion could there be here? More than once, she’d wanted to engage the Erdamun on this topic, but had stopped short. For though the offworlder had always seemed gentle as any domesticated animal, there were rumors of violence and unspeakably destructive weapons.

What, Calarplis wondered, did the Elders know of such things? Nevertheless, their authority had kept her from approaching the Erdamun, despite her nagging curiosity. Though she was well past middle age for her species, she was still too young to risk death so cavalierly.

Like the rest of the Daalong, Calarplis’ distant evolutionary ancestors were a species of arboreal rodent. At the thought of defying the Elders’ warnings, her pointed ears had twitched mightily.

But now that Wohlatris was gravely ill, her attitude shifted. The “abundance syndrome,” the village doctor had concluded. Imagine, the cellules of one’s own body growing out of control, until its vital functions ceased! The doctor had shaken her head. The Shaman had rent his tunic. Wohlatris would die within the fourarc. It was The Way and there was no other.

Calarplis was determined. Might the Erdamun’s mysterious dome hold the answer to Wohlatris’ woes? Perhaps to the Faultreen in the East country, she told herself, the dome would have been too terrifying to approach.

But the Daalong themselves knew the lore of machines and, some said, were soon to harness the very lightning in the sky to power them. Of this, Calarplis was doubtful but, as she well knew, the Elders never spoke a word in jest. Come to think of it, she realized, the Erdamun might know of such things. Regardless, she pressed on.

By now, the diminutive Daalong had reached the site of the off-world dome and scrambled up the shallow embankment leading to its entrance. There she stood, patiently. The Erdamun, it was said, could sense one’s….

Calarplis jumped back a step. Out of nowhere, a door panel appeared and slid to one side. In its threshold stood a tall figure swathed in black, whose eyes peered out through a glass pane embedded in his helmet.

“The Elders forbade you to visit me,” he said. At first, Calarplis heard the unfamiliar sound of his off-worlder voice, until his dome’s translation matrix masked it with a voice speaking fluent Daalongese.

“I know,” said Calarplis. “But my Wohlatris … neither the doctor, nor the Shaman….”

The Erdamun stared at her through his odd-looking eyes.

“I can promise nothing,” he said. “But come in. Tell me what you’ve seen.”

“Can … can I go home afterwards?” asked the trembling female.

It took a few minutes of reassurance before Calarplis, head bowed, stepped through the threshold — and opened her soft brown eyes wide. It hadn’t occurred to her that most of the dome was actually underground.

“And yet, Little One,” said the Erdamun, “I am trapped like a fly in amber.”

Calarplis’ ears twitched up a storm.

“That I do not believe,” she said.

“Skepticism!” said the Erdamun. “I like that. But know that the dimensions of space and time are as the thickest molasses, if you run afoul of them. Fortunately, my precarious relationship to the cosmos may enable me to help Wohlatris.”

“You will feed him molasses?” asked the Daalong.

The Erdamun’s smile shone through the glass on his helmet.

“Not until you feed me information,” he said.

“First tell me why you’re here,” said Calarplis. “you to whom our air is poison.”

“Not your air,” said the off-worlder, “but your temporal signature.”

“You know I don’t know what that means!” she shouted.

“And I don’t know the ‘meaning’ of anything,” said the Erdamun. “But I’ll still help you, if I can.”

“You’re a sly one,” said the Daalong. “But I’ll learn the truth about you, you’ll see.”