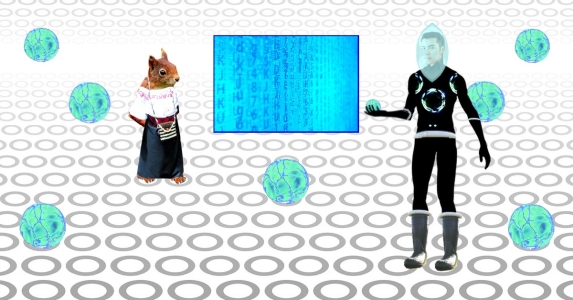 Calarplis stamped her narrow foot into the shifting circular pattern on the floor of the Erdamun’s dome, one of the many disorienting features of its seemingly limitless internal space. Yet the sensation the floor created — of floating on solid ground — was no less disturbing than the offworlder’s outrageous request.

“That I cannot do!” she shouted.

She pointed to a sleek device that the offworlder held in his hand. To her, it looked like some sort of artificial nualha fruit, but she knew that couldn’t be right.

“What you’re asking,” she said. “The doctor would never allow it. And the Shaman … it would surely make him tremble.”

Strangely, the Erdamun’s smile seemed even more kindly inside the dome. Was it a trick of the unearthly light that suffused every corner of the place?

“But you’re not trembling, are you?” he asked. “Now, please, let me explain the device again.”

“Heard you the first time,” said Calarplis. “You want me to collect Wohlatris’ blood. But how can I do that with a piece of … of fruit, for all I know? The Doctor uses a sharp knife or leeches, and only when … but Wohlatris is very sick, isn’t he?”

“That’s what I want to discover,” said the offworlder. “And again, this ‘fruit’ wouldn’t take anything from your beloved but data.”

“Data?” asked Calarplis. “I know of no such thing. What part of the body makes data? Wait … I know ,,, the spleen! The Doctor said the abundance syndrome had settled into the spleen.”

The Erdamun turned away for a moment, just as the urge to roll his eyes became irresistible. To regain his composure, he set about finding a box to put the small sensor device into.

“I promise,” he said. “Nothing vital will be taken from Wohlatris. The device will simply make a picture in numbers of his internal organs and, yes, his blood.”

“Number pictures?” asked Calarplis. “The doctor once told me about a picture of the heart she wanted to build with numbers. Now … what did she call it?”

“It’s a compact biometric sensor array,” said the offworlder. “Where I come from, it is commonly known as a medscanner.”

“So this … scanner … will make a mathematical model of Wohlatris?”

“Try it on me first,” said Calarplis. “If you have a mind to kill somebody with that thing, I’d rather it were me.”

The offworlder shrugged, took hold of the Daalong’s right arm and passed the device over it. A moment later, a broad, flat screen appeared in mid-air. It displayed a series of readouts that, to Calarplis, resembled a stew of brightly colored noodles.

“This is your data,” said the Erdamun. “See how much I’ve captured just from one arm. When you scan your beloved….”

“… you’ll need to pass the device over his entire body, as thoroughly as you can. Skip nothing!”

The brave female hung her head.

“Because he is sick everywhere,” she said.

The Erdamun looked at her for a moment, dropped the medscanner into the dull metal box he’d found earlier and held it out to her soft, furry hands.

“I cannot help him without his data,” said the Erdamun. “And I cannot walk among you to retrieve it myself.”

“Is that because of Time again?” asked Calarplis. “Then how can I take this device — or leave here — without also being trapped, as you say you are?”

“There is much, Little One,” said the Erdamun, “that you don’t know. Look closely.”

For the second time that morning, Calarplis’ ears twitched violently. The Erdamun had vanished — only to reappear again to her left.

“What you see here is merely a trick of the light,” said the Erdamun. “I am actually in another place and only send my image here.”

“Little One, make haste,” said the offworlder. “By the time I explain everything you see, your Wohlatris will be gone. Take the medscanner. When its work is done, it will beep three times, vanish from your hands and return to me. You may visit me whenever you are ready and I will try to help you.”

The Daalong’s eyes misted over.

“Nature save me,” she whispered. “If you’re lying, you will think of Time as a much kinder foe than me!”

The offworlder watched as she scurried up the escalator steps leading out to the forest, then sealed his dome tight again. He dared not let the physical laws of Calarplis’ world mix with those of his stasis chamber.

“Hurry,” he mumbled. “before the timeline shifts again.”