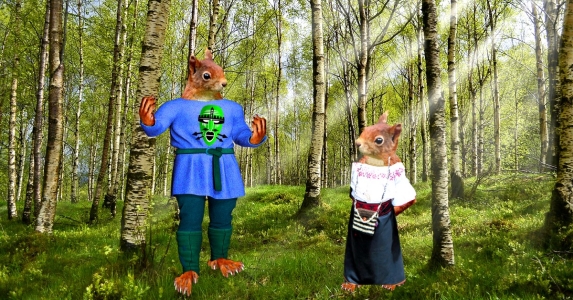 By late morning the next day, the sun had just finished burning the dew off the eastern meadow that led into the forest. Calarplis cursed herself for delaying so long, but it had been too hard to leave Wohlatris alone in his bed. Asleep, his face was angelic and she could almost believe he was merely tired instead of gravely ill.

Besides, the Erdamun’s advice was her last hope. Far better to linger in the dreamy halfway world in which everything was still possible — before Reality’s grubby paws ruined everything, by setting events on a fixed course.

Now her narrow feet rushed at the pace of a torrid breeze, in the hope of arriving at the Erdamun’s dome undetected. Alas, just as she rounded the last knoll before entering the forest, Calarplis saw Shaman Neflorinis, performing a ritual cleaning of the path ahead.

“Greetings, Sister Calarplis,” he said. “You are right not to neglect your own health by staying shut up inside all day. Wohlatris’ fate is in the hands of Nature now.”

“Th … thank you Shaman,” said Calarplis. What horrible luck was this? She hadn’t run into the potbellied religious leader in weeks, outside of the Hallowed Space.

“You’ve caught me at an auspicious moment, Sister,” said Neflorinis. “The cleansing ritual has revealed a powerful healing force in our midst.”

“Where … if I may ask,” said Calarplis, “did this power come from?”

The Shaman clapped his pudgy hands to his belly, threw back his head and laughed.

“Where?” he asked. “All things flow from Nature, even your misguided wish to visit the Erdamun.”

“Oh, but I do,” said Neflorinis. “I see it in your eyes, full of the wistful thought that maybe the offworlder can give you what Nature has denied.”

“And if you’re right,” said Calarplis, “is not the offworlder a thing of Nature?”

The Shaman gasped and stepped backward.

“That is … uncertain,” he said. “I have not even verified the creature’s existence. Perhaps he is an illusion, brought to life in our minds by the will of the Dark Wraith.”

“The Doctor and I disagree,” said Neflorinis. “But it is not my way to force my beliefs on you. Oh, Sister Calarplis, promise me you will be careful! The Erdamun wields a power we cannot comprehend. Besides, there are rumors he is an outcast from his own nest. Think about that when you dally with him today.”

Calarplis was desperate to explain herself. She’d taken comfort in the Shaman’s rituals many times. But from the sullen way his downcast eyes scanned the meadow grass as he walked away, Calarplis knew the Shaman would hear no more from her.

So, as the sun rose to its zenith in the sky, she scurried into the forest, past the mottled bark of the carkluia trees until she reached the offworlder’s dome. She stopped to catch her breath and marvel again at its eerie tranquility. How could such serenity, she wondered, be the work of the Dark Wraith?

As before, it wasn’t long before a door appeared in the dome and slid to one side. The Erdamun greeted her with a smile that could only mean one thing, couldn’t it? But why did he look so weary?

“Finally here,” said the offworlder. “Come in. The time shift is upon me. Listen carefully, for I will only tell you once.”

“Are you ill?” asked Calarplis.

But the tall figure in the black encounter suit ignored her and held up a graceful, arching contraption unlike anything the Daalong had ever seen.

“There is hope,” he said. “Wohlatris must lie under this device until it turns as blue as the sky on a summer day. By then, it will have reprogrammed every cell affected by the ‘abundance syndrome.’ Take it and go — before my dome loses temporal integration with your world.”

At that moment, the floor to her right seemed to disappear and appear again in rapid succession.

“You will,” said the offworlder. “You cannot fail. But leave now!”

The Daalong grabbed the strange device in her trembling hands and ran toward the escalator steps that led back up to the forest. She was nearly to the exit when a peculiar sound, like the honking of the seabirds in the Southlands, made her stop short.

“Too late,” she heard the Erdamun’s voice behind her. The dome’s door slammed shut with such force that it sent her tumbling back down the escalator. The offworlder rushed to her side.

“The timeline has shifted,” he said. “There was nothing I could do to prevent it.”

“What will become of me?” she asked. “And I warn you: if you dare say ‘Time Will Tell.’ you will breathe your last.”