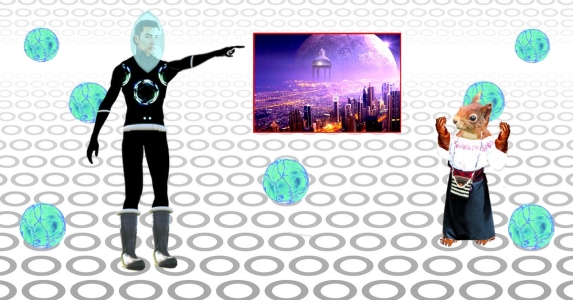 The Erdamun gazed into Calarplis’ dark eyes and helped her up off the floor of his dome.

“I will find a way to make this right,” he said.

The dome, which had been rather badly shaken by the shift in the timeline, had finally settled down.

“Do you even know where we are?” asked the Daalong female.

The offworlder, who by now had walked over to a compact console only a few feet away, flipped a sequence of toggle switches that made the dome’s holographic view screen reappear. Calarplis’ shoulders tensed as the screen displayed an immense cityscape.

The Erdamun’s smile was, as usual, strangely reassuring and Calarplis couldn’t stop herself from trusting him. Was that, she wondered, due to the influence of the Dark Wraith, as Shaman Neflorinis had warned?

“You are viewing a real city,” he said. “Though, to be honest, I myself am confused by it.”

“Please,” said Calarplis, “spare me your nonsense. What are you talking about?”

The Erdamun explained that they were now viewing the capital city of his homeworld. whose name sounded like “Erda,” when filtered through the dome’s translation matrix.

“It appears I’ve been recalled,” he told her, “which could spell trouble. But don’t worry. You will be provided for.”

“So the rumors are true?” asked Calarplis. “You were cast out?”

The Erdamun ignored her. He was busy studying the holoscreen, which now showed the dome’s graceful descent to an area just outside a major government complex. He turned slowly to face her again.

“I broke the law,” he said, “though quite by accident. The dome’s recall means that either I’ve been forgiven, or accused of further crimes.”

Calarplis threw her furry arms into the air.

“What in Nature’s realm could you have done?” she asked. “Though you are, if you’ll pardon the expression, rather odd, you’ve shown me every kindness. I only regret that I’ll never see my Wohlatris again — alive or … or….”

“Do not trouble yourself,” said the Erdamun. “My homeworld’s leaders are pompous, but generally fair. Unless the Laws of Physics forbid it, you will return to your world with my device — and in time to save your beloved.”

“How nicely you speak,” said the Daalong, “for a criminal. But I’ll hold on to that crumb of hope because I have no other.”

The words had barely left her broad mouth before the dome alit with a gentle thud. Instantly, the sliding door opened wide. Three beings resembling the Erdamun glided down the entryway escalator. To Calarplis’ relief, one of them appeared to be female and though she had no reason to believe that an offworlder female would be more understanding, she nevertheless took comfort in that thought.

“Earnest Williamson,” said the taller of the two males in a stentorian voice. “You have been recalled so we may review your case. Your interactions with this Daalong female appear to be in direct violation of our explicit orders.”

Calarplis marveled at the shiny, sapphire uniforms the three new arrivals wore. Each uniform was studded with silvery badges of office, which were rather intimidating. Nevertheless, she felt compelled to speak.

“The Erdamun has been nothing but kind to me,” she said. “I cannot see him as a criminal, if that matters to you.”

“It may,” said the lone female. “But first we must review the facts of his case. You will wait here.”

The three officers gasped as Calarplis rushed over to the Erdamun and grabbed hold of one leg.

“No!” she shouted. “I will not leave his side until I’m satisfied he has been treated fairly. I know nothing of his so-called crime. All I know is that he has been compassionate. And for that I will not let him go unprotected.”

“It’s all right, Little One,” said the offworlder. “My people have their ways, just as yours do.”

“Then they are,” said Calarplis, “no better than the Shaman or the Elders who wanted me to let my Wohlatris die rather than seek your help.”

The second of the two male officers frowned.

“Is this true?” he asked. “Did you attempt to interfere with her planet’s local timeline?”

“Bring her along,” said the second officer. “We’ll need to enter her testimony into the official record. Do you promise to tell the truth?”

“What else is there to tell?” asked Calarplis. “Are you saying that your people lie?”

With that, the three officers led the Erdamun and Calarplis out of the dome. For her part, the Daalong had the strange sensation of leaving home. But why should that be?