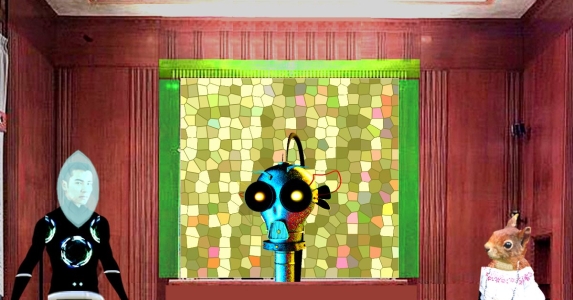 To reach the government building where the Erdamun would be arraigned, Calarplis, the Erdamun and the three arresting officers crossed a broad plaza. Surrounding it were monstrous buildings and into it, poured crowds of humanoids from every direction. To Calarplis, the inhabitants of Erda resembled a flock of brightly colored birds, swooping down to their summer mating grounds.

After only a few minutes on this alien world, she longed for the safety of the Erdamun’s dome. Yet she was determined to stand up for his kind deeds. Unfortunately, the tallest of the three officers had already tried to silence her.

“Don’t speak,” he told her, “unless the magistrate addresses you directly.”

“Why?” asked Calarplis. “Is he hard of hearing?”

“You are an offworlder,” said the second officer. “That’s reason enough.”

Though she was tempted to reward his demeaning words with a sharp tongue-lashing, the Daalong female swallowed her pride and kept quiet. She dared not spoil the Erdamun’s chance to go free.

Once inside the immense government building, the five of them were led into a grand chamber paneled in marble and dark wood. Calarplis’ jaw dropped as a large android rolled in on treads from an adjoining room and came to rest behind a heavy desk.

The imposing android — a state-of-the-art Jurispod — raised its metallic, four-fingered hands for silence. Its mellow, yet commanding voice reminded Calarplis of her village Elders. In spite of herself, the thought of Elder Tarclanlis rolling around on treads made her giggle.

“Laughter is not called for,” said the AI. “The charges are serious. But perhaps the offworlder will share her perspective so we all may learn.”

“No,” said Calarplis, “I will not share with such a one as cannot understand simple feelings.”

The Daalong wagged her finger at the android

“It’s plain as day,” she said. “You cannot understand the Erdamun’s compassion. Why, you act as if helping me were a dirty crime, like thieving.”

“Though I do not grasp the relevance of dirt or other particulates in this context, I would know whether the offworlder believes that the breaking of an oath is a crime. Mr. Williamson swore an oath not to interfere with the timeline of any other world during his exile.”

“This is a machine that thinks?” she asked.

“Yes, Little One,” whispered the Erdamun.

“Then it is poorly made,” said the Daalong.

“The witness will confine her comments to relevant matters,” said the second of the two arresting officers.

“My comment is very … leverint,” said Calarplis. “The Erdamun’s dome changed lots of things on my homeworld, way before I met him. Half the folk in the village won’t enter that part of the forest, even to tend their mushroom crops — and the nut harvest is down, too, by the way.”

“The result, I gather,” said the Jurispod, “is a significant loss of revenue.”

“Some folk are forced to shame their families by eating from the community pantry,” she said. “Then there’s the Shaman. He looks for clues to the dome in his sacred books, instead of soothing the souls of the villagers as he used to. Ask me, that’s plenty of interference.”

“What say the arresting officers?” asked the android

At that, the lone female officer displayed a series of graphs on a holographic screen. Each one, she explained, illustrated projected timeline disruptions on Calarplis’ homeworld, starting from the moment Calarplis first sought the Erdamun’s advice.

The Jurispod’s status lights blinked erratically before settling down to a steady pulse..

“Potential disruption,” it said, “but no actual disruption, over a period of several arcs. I also see no evidence of a temporal anomaly. I must assume that Mr. Williamson’s actions are, in fact, an integral part of the planet’s local timeline.”

“It appears,” said the android, “that the prisoner has done no harm. What’s more, the purely speculative nature of your data suggests that Mr. Williamson’s experiments in temporal dissociation, which led to his original indictment, have also caused no appreciable harm.”

“But Your Honor,” said the second officer, “the statutes forbid….”

“Statutes that do not protect the populous from perceptible harm have no merit,” said the AI. “I rule for the defendant and reverse his original sentence. He is free to go. You may appeal my decision, but I have already posted it to the Cyber Consortium for Legal Affairs, where it is gaining wide acceptance.”

The AI wasted not a nano-second rolling out of the capacious courtroom. The three officers stared after it a moment, then removed the Erdamun’s handcuffs.

As they walked back to his dome, the Erdamun explained that he could return them to the exact temporal coordinates when she’d first introduced herself to him.

“And the healing device?” she asked. “It will work?”

“It surely will, Little One,” he said, “unless you interfere.”

Calarplis’ ears twitched up a storm..

“Enough of your wisecracks,” she said. “If I’d been that machine judge, I’d have convicted you for them alone.”

And yet, as the dome reappeared in the forest near Calarplis’ village, there was no ignoring her broad, bright grin.