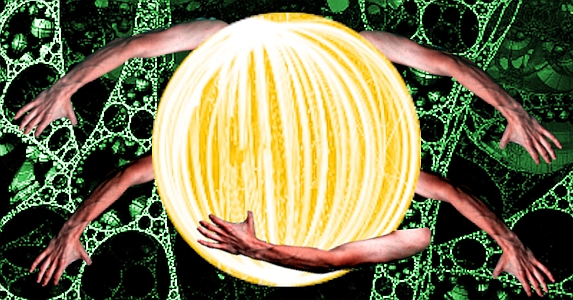 Based on Sapiento’s startling analysis, Reshma and her team compared the spatiotemporal coordinates of the sphere to its surroundings. The discrepancy was off the scale.

“That … thing … shouldn’t even be visible,” said Reshma Laghari.

“I see it plain as day,” said Lt. Colonel Shelby. “Faulty calibration is my guess.”

“There is a fissure,” said Sapiento, “in the boundary between our universe and that inhabited by the sphere and its makers.”

“They claim to have a ceremony,” she said, “in which they can view neighboring universes.”

“You botch the analysis,” said Shelby, “and then grasp for a religious explanation?

“Colonel!” said Reshma. “You have no call to impugn Dr. Voba’s motives.”

A series of piercing screams cut their altercation short.

“That’s coming from the center of the dig,” said Allida Voba. “Right where the sphere is.”

The three of them, plus Sapiento, jogged over to the titanium enclosure that Shelby’s troops had built around the object.

“Quarks in a box!” said Shelby, “The locking mechanism’s been burned to a crisp. Don’t you people keep your weapons in a locker?”

Allida ignored him and peered into one of the video displays that ringed the structure. Her heart raced at the sight of Hal Stanton, bent double in agony — and missing his right arm.

Hal’s harrowing shrieks slurred his words, but the sad gist was clear. When his hallucinations returned, he broke into the enclosure. Where the sphere rested, he thought he saw an ancient pleasure palace. But as he grabbed for its door handle, his arm was severed.

“It appears his arm entered the zone of spatiotemporal instability,” said Sapiento.

But there was a second gruesome outcome. Duplicate copies of his arm were piling up on the ground surrounding the sphere.

“Do something!” said Shelby. “Get a medic and yank him out.”

Allida grabbed the comlink hanging from her belt and called the mission’s chief medical officer, Arthur Leung, who arrived soon after with a pair of triagebots. He talked Hal down from hysteria, sent in a triagebot with a sedative and followed that with a motorized gurney. He then sent the second robot to retrieve four of the duplicate arms.

“Dr. Lester will see if he can get Hal stabilized,” said Arthur. “I’ll have a look at those arms.”

“I’d like to tag along,” said Reshma, “You too, Sapiento, if you don’t mind, Colonel. Colonel?”

Shelby, crouched down at the edge of the enclosure, was too preoccupied with vomiting to object.

“It’s only going to get worse,” said Allida. “Meanwhile, could you post a guard around the enclosure?”

“Right,” said Shelby. He pulled himself to his feet. “You have any idea what’s going on?”

“What if the sphere’s just following protocol?” she said. “It lures people with vivid dreams then duplicates them. Hal got spooked at the last minute and backed away. Otherwise, we’d have a dozen copies of Hal, instead of twelve extra arms.”

“Duplicates?” asked Shelby. “What for?”

Allida nodded her head in the direction of a small, blue temporary dome to the left of the enclosure and walked off. Shelby followed, entered the dome and saw a collection of small items arrayed in a series of bins. Allida donned a pair of latex gloves, reached into one of the bins and held up a pale, globular object.

“According to AI Analytics,” she said, “this is a biomechanical data storage device. We found it a few feet away from where the sphere eventually appeared. It’s ahead of anything we can do, so there’s no chance it was left behind by a prior mission.”

“And totally alien,” said Allida. “Yet Analytics has been able to tease out some of its data. This Colonel, is a technical manual — to be consulted when the population of a planet begins to fail.”

“You mean, after a war?” asked Shelby.

“War, famine, disease,” said the archaeologist, “it may not matter. But given the state of these ruins, something wiped out the inhabitants while they still had a vibrant culture.”

“A replicator of sentient life,” said Allida. “My guess is that someone read this manual and summoned the sphere.”

“When?” asked Shelby. “This planet looks like it was abandoned a thousand cycles ago.”

“Probably,” said Allida. “We’re likely the first sentients to set foot here since the sphere was activated. It took a while to decide we fit the bill, then it attempted to contact us.”

“Not bad for a totally alien mentality,” said Allida. “The sphere quickly learned what buttons to push.”

“I say we blast the dang thing,” he said. “This is trouble we do not need.”

An insistent pounding, from the direction of the stainless steel enclosure, drove them out of the dome. As they approached the structure, they could already see a humanoid face in its external view screens.

Shelby zoomed out the display — to reveal a roomful of Hal Stantons, naked and shivering. Allida was so non-plussed that she didn’t hear her comlink chirp at first.

“It’s Arthur, in Sick Bay,” said the doctor. “You’re not gonna believe this….”