Episode 5: Behind the Curtain 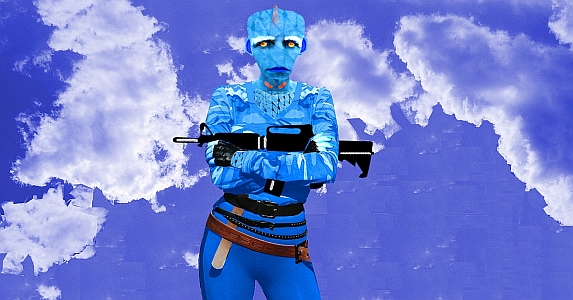 Usually, the arrival of a Pelax ship would have made Allida Voba cringe. The few times she’d participated in a joint archaeological project with them, she’d fought hard to hide her revulsion. It was easy to see why. The Pelax, a species of sentient amphibian, had rounded pale-green eyes that oozed white slime whenever they were agitated. And they were always agitated. Ironically, the Pelax were also uncommonly sweet. Allida had often been charmed, in spite of herself, by their complements.

But with more Selethans appearing in the vicinity of the sphere every day, Allida brushed her bias aside and trotted over to the lander pad the moment the alien ship touched down.

The Pelax’s nasal twang resonated in the crisp morning air.

“Greetings, Doctor Voba,” he said. “I never hesitate to help a Sky Alliance partner. May I say you appear unusually aware and attentive today.”

“How engaged and insightful you appear as well,” she said. “If your journey hasn’t been too arduous….”

“Oh, it was splendid!” said Draldriveen. “Now. I understand you have encountered an interdimensional object?”

Allida nodded, and pointed to where the sphere lay in the near distance. As they walked over to it, she mentioned the previous day’s explosion. Draldriveen’s eyes erupted with droplets of slime.

“Horrible,” he said. “Interdimensional occurrences are rarely violent. And … is this the object in question? What do you know of its function?”

Allida took a deep breath and summarized the events of the past few days. Draldriveen’s voice quaked.

“Selethans?” he said. “That is most troubling. I will set up my equipment here.”

“They are parasites,” said the Pelax, “who have likely hijacked this sphere for their own purposes. I will run a few tests.”

Allida gave him carte blanche, then gasped as a suite of odd-looking electronic components floated out of the Pelax lander and landed at their feet. The alien caught her puzzled expression and his broad lipless mouth curved up into a smile.

“Advanced-design gravity modulators,” said Draldriveen. “I would explain, but I assume you would prefer I focus on the task at hand.”

Without another word, he assembled the components into a curious device Allida had never seen before.

“This,” he said, “will enable me to see the position of the sphere on the other side of this spatiotemporal rift.”

“I thought this was a religious ritual,” said Allida.

“Who says it is not?” said Draldriveen. “But please, let me proceed.”

He flicked a toggle switch and a holographic screen appeared in the air in front of them. Cloudy at first, the screen gradually sharpened until it showed the sphere in an utterly different environment.

Draldriveen switched the holoscreen to an areal view of the transdimensional laboratory. They now saw five insectoids writhing on the floor with their multiple appendages bound by twine.

“They have been overcome by force.” he said.

A strangled voice broke in on their conversation, through the Pelax’s device.

“Can you patch that speech through our translation grid?” asked Allida.

“That won’t be necessary,” said a dark voice behind them.

“He’s telling you the truth,” said Ertonul. “We Selethans are unstoppable.”

“Liar!” said Allida. “You played on my sympathies. Well, no more. I’ll show you what ‘unstoppable’ means.”

She grabbed her comlink.

The air filled with a dull roar, as a squadron of drones lifted off and began circling overhead.

“You can’t be serious,” said Ertonul.

“What is about to happen?” asked Draldriveen.

“As I told the Colonel last night,” said Allida. “If the Selethans didn’t cooperate, we’d have to destroy the sphere.”

“But you mustn’t!” he said. “With the dimensional rift still open, any weapon you use against the sphere will also destroy the beings on the other side!”

Allida’s eyes bulged and she grabbed her comlink again.

“Colonel,” she said. “Stand down. We have a … a situation. Send me a security team, pronto.” She closed contact and clicked on a second preset that connected her to a loud public address system.

“And what,” asked Ertonul, “do you propose to do?”

A moment later, as the drones returned to base, he and the rest of the Selethans were down on the ground under restraint, at the hands of Shelby’s troops.

“Since you won’t come clean,” said Allida, “we’ll probe the information out of you. Draldriveen, keep talking to our friends in the other dimension and….”

The atmosphere darkened and, for a fraction of a second, took on a dark blue tint. When it returned to normal, an ominous figure stood before them. It was a female Selethan, cradling a deadly particle rifle in her arms.