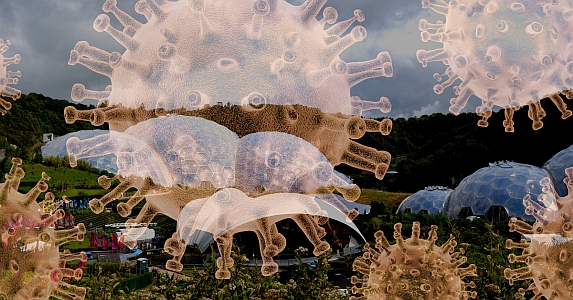 While Allida and Arthur cowered under the glare of the armed Selethan, Reshma Laghari was analyzing the sphere’s steady stream of emissions — and noticed a spike in intensity.

“It’s like a door just opened,” she told her lab assistant.

When Reshma heard Allida’s call on the PA system, she hurried out of her dome. By then, the menacing Selethan soldier was already hovering in the sky above the dig site. Reshma raced back into her dome to check her sensors.

“A massive energy surge, like a transmat,” she said, “but no physical presence. Craters, that Selethan soldier is only a holojection!”

Yet a holojection was, in theory, capable of interacting with the real world, provided it was wrapped in an electromagnetic field of sufficient intensity. Reshma’s readouts confirmed her suspicions: The dig site had just experienced a massive spike in EM radiation.

“We have to shut that projection down” she said. But how? Because she couldn’t reach the projector on the other side of the interdimensional rift that the sphere had created, her only option was to block the encapsulating EM field. Reshma reached for her comlink.

“Colonel Shelby?” she said. “Is your base ship equipped with industrial grade replicators?”

She hoped his crew could deliver an EM damping cavity to her specifications in record time.

“You bet,” said Shelby. “We use them all the time to power down an enemy facility before a major strike.”

Minutes later, the Colonel’s high-speed replicators had whipped up the damping cavity and sent it to the dig site by transmat. As soon as it surrounded the sphere, the image of the Selethan soldier began to flicker.

All this time, Allida had frayed every nerve-ending trying to placate the demanding Selethan, who’d identified herself as “Thalonul.”

“You cannot defeat me,” said Thalonul, “Compared to my arsenal, your weapons are mere toys.”

“Don’t tempt me,” said Allida. “My military attaché has full authorization for nucelonics.”

“Am I supposed to feel threatened?” she said. “You’re even more pathetic than I….”

Just then, from Allida’s perspective, Shelby’s EM cavity materialized and the ominous soldier froze in mid-snarl. Allida’s comlink buzzed with a call from Reshma.

“I bought us a little time,” said Reshma. “The soldier can’t move for now. Shelby’s ready to move on the Selethans at any time.”

Allida’s brow furrowed. The number of alien invaders had increased exponentially in the past day. Though unarmed, there were now upwards of five hundred clones in the process of differentiating. An all-out war with that many aliens could wreck the expedition’s infrastructure and kill several of her decidedly un-military scholars.

“Draldriveen, do you know how to close the rift?” she asked.

“Maybe not,” said the Pelax. “We don’t know how it was created. But my ship … we could create a second rift that would interfere with the first.”

Allida looked up at the still motionless Thalunol and decided to make a break for it.

“Let’s check with our physicist,” she said, and led him to Reshma’s dome.

“Two rifts in the same vicinity?” asked Reshma when they arrived. “What do we even know about this phenomenon?”

“Forgive me, Doctor Laghari,” said Draldriveen, “but the Pelax are intimately familiar with such things. They play a major role in our religious observances. Our methods are very precise.”

Draldriveen’s plan was simple — in a complex sort of way. Technicians on his base ship could create a new interdimensional rift at coordinates overlapping the first. From that point on, any clones created by the sphere would be pushed into the second rift and likely perish. As for Thalonul, she’d soon find herself addressing an empty star field.

“Seems kinda cruel,” said Allida, “but I guess this is war.”

With that, she led the Pelax back to his lander, so he could rejoin his comrades in orbit. Along the way, a large, reinforced dome appeared by transmat to their right. Seconds later, Shelby’s troops ushered the entire population of Selethan clones inside, at gunpoint. The Colonel buzzed Allida’s comlink.

“So I see,” said Allida “Really uncomfortable about this. We don’t have enough food and water for them.”

“If you knew the Selethans as we do,” said Draldriveen, “you would not feel such empathy. I must warn you: if our efforts fail, it would be catastrophic for your expedition. But for now, think positively.”

Allida watched as the Pelax lander lifted off vertically from the lander pad. What, she wondered, would the treacherous universe deal out to her now? In the near distance, she saw Hal Stanton, fitted with a prosthetic arm, running up to her.

“Nice to see you up and about,” she said.

“Whatever you’re doing,” said Hal. “It won’t work. This — everything — is part of their plan. They’ve done it on hundreds of worlds. I saw that when the sphere grabbed me. The next phase is a massive infection. We’re all gonna die!”

Allida rested a hand on his left shoulder.

“Calm down, Hal” she said. “You sure you weren’t having a nightmare?”

But a call from her chief medical officer made her comforting words ring hollow.

“Leung here,” said Arthur. “Sick Bay is overrun with cases of an unknown pathogen. Any idea what’s going on?”