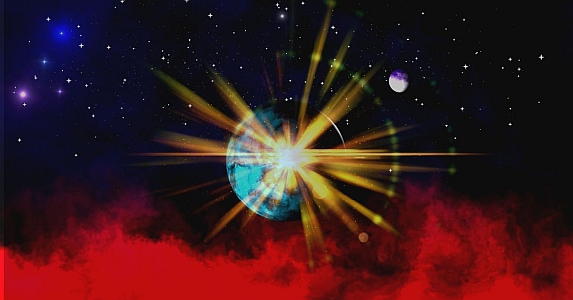 Cerberus Sick Bay was packed tight with patients. A medbot met Allida at the entryway and helped her on with a chartreuse hazmat suit. Once her helmet was sealed, the medbot issued a stern warning.

“One breach of protocol, and you will be confined to the ICU,” it said.

Allida prayed she wouldn’t be there that long. The medbot stood aside and she entered the main room. One of the nurses recognized her.

“Doctor Leung is waiting for you,” he said. “Gotta warn you. What this bug does to people … it’s hard at first.”

Allida stepped through the narrow archway the nurse pointed to, and saw Arthur bent over a comatose patient. Between his pallid skin and the scaly deposits the poked out all over his body, the patient resembled a member of an alien species. Allida winced as the hypodermic in Arthur’s hand entered the patient’s arm with no resistance, as if his entire body had turned into gelatin.

As she crossed the threshold, Arthur looked up.

“You’re here,” he said. “You had to see this first hand, but you must leave soon. It’s too dangerous.”

“What sort of infection is it?” asked Allida.

Arthur blinked at her through his helmet visor.

“Infection?” he said. “That’s what we thought at first. If only. Then we might have a chance. But this….”

The Doctor plopped down on a nearby stool, his hands trembling.

“What is it?” Allida whispered.

“It’s spores,” he said. “The Selethans have moved on from cloning to full-blown parasitism.”

“My patients,” said Arthur, “are incubators. I don’t know how long it’ll take. But sooner or later, a hoard of Selethans are going to burst out and … and ... it’s so….”

“Arthur,” said Allida. “Try to think. Won’t the Selethans be infants and easy to contain?”

Arthur stood up again as a female associate approached with a tablet crammed with graphs and spreadsheet data. He glanced at the tablet, waved her away and sat down again.

“Not that simple,” he said. “The data on that tablet confirmed my suspicions. The Selethans look humanoid but they’re not mammals. They go through a larval phase. Whatever pops out of my patients will be mindless creatures, whose only thought is feeding. I don’t have to tell you what that means.”

Orderlies brought ten more of her crew in on stretchers. Allida counted to ten and got a grip on herself, even though every cell in her body was telling her to scream.

“The Colonel,” she said. “And Reshma, and the Pelax — you warned them?”

“The Pelax should be safe,” said Arthur. “Draldriveen took off before the outbreak. Likewise Colonel Shelby’s orbiter. I told him and Reshma to lock up their landers and call me at the first sign of trouble. But who knows?”

“Can you stop the … the hatching?” asked Allida.

“Only by torching every last patient,” said Arthur. “But you see how fast this is spreading. You want to kill off the entire expedition?”

“No,” said Allida. “But if we don’t stop this here, what’s stopping the Selethans from migrating to our colonies and allied worlds? They’ll have our ships, our weapons — everything.”

“Maybe that’s it,” said Arthur. “If you destroy all offworld transport, the Selethans will be stuck. I’d blow up your dig site as well, so they can’t build their own ships.”

“Maybe the beings on the other side of the interdimensional rift can help,” said Allida. “Let me ask Draldriveen. Otherwise, we’ll strand ourselves here. Trouble is, I can’t wait much longer to give the order. There might be nobody left to carry it out.”

“Go, get out of here,” said Arthur. “I don’t know how much longer these suits can hold out. That was the other bad news on that tablet: The spores are mutating.”

Allida patted Arthur on the shoulder and walked back into the entryway, where a medbot helped her out of her hazmat suit. She exited Sick Bay and reached for her comlink when she was less than a meter away from the entrance.

“Draldriveen,” she called out. But the kindly Pelax offered no hope.

“We’ve already strained the continuum,” he said, “by creating that second rift. Any more interdimensional incursions could weaken the fabric of local space-time. I fear for the consequences.”

“Then I’ll need your help another way,” said Allida. “Is your ship armed?”

It took only a short time to explain her desperate action plan. Explaining it to Shelby took a bit longer.

“You know how much those landers cost?” he asked.

“Not as much as mass extinction,” asked Allida.

During the next three hours, the Sick Back continued to fill up with new patients. But finally, between the human and the Pelax orbiters, weaponry was locked on target.

“Time to evacuate, Arthur,” said Allida into her comlink.

The voice on the other end made a dry croaking sound.

Allida fought back tears and gave the order to fire. A wave of nausea overcame her. She dropped to her knees. A bulbous patch of scales appeared on her left arm and she realized that were no halfway measures. Fortunately, her comlink was still connected.

“Correction,” she said. “Torch everything. Save yourselves, just kill this thing here and now.”

Across the Star Alliance, astronomers recorded the series of nuclear explosions that rocked the planet. What, they wondered, had actually happened? The gibberish spouted by the returning Pelax and human military transport crews suggested mass psychosis. A rift in space-time? Cloning? Spores? Some politicians asserted that Allida had degenerated into a cult leader, whose mad delusion led to mass murder.

Regardless, the high levels of radiation that registered on Cerberus a generation later made even an automated return trip unlikely. The incident would remain a mystery — until years later, an expedition to a remote world in the Halcyon sector reported the siting of a glowing sphere. It had appeared overnight in the midst of an intertemporal rift.