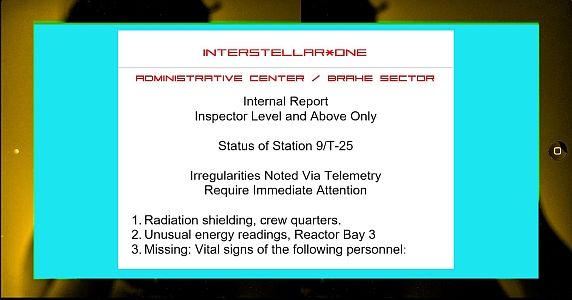 The use of AI monitoring systems was so widespread that all but the smallest spaceports were linked to InterstellarOne, the administrative arm of the Galactic Governing Board, or GGB. So that ought to have made all in-person inspection tours unnecessary. The GGB’s authority was absolute.

Facilities with code violations were shut down, reorganized and assigned new management. Fines were issued, psychological profiles taken, rehabilitations scheduled. Within a month, the facility would be code-compliant, with any needed technology upgrades installed. And yet, to appease the public, administrative inspections were still carried out.

Inspector General Helen Dubrovnik had participated in dozens of inspection runs since her promotion five years earlier. But that made her current mission no less demoralizing. Everyone connected with her flight both understood and dreaded her dark mood. That went double for Glenna Hayes, captain of the Brighter Star.

Inspector Dubrovnik stared at her pilot a moment, then stood up from her acceleration chair.

On a ship the size of the Brighter Star, the provision of individual quarters was frowned on by the InterstellarOne Engineering Consortium. The inefficient use of the ship’s internal dimensions translated into increased thrust capacity, greater strain on the energy system and a larger docking footprint. But aside from these technical deficits, pampering state officials also went against the Engineers’ egalitarian, merit-based culture. If the rest of the crew could tolerate semiprivate bunking, why not Inspectors General?

It was an argument, however, with no traction. InterstellarOne knew the pressure they put on their officials, especially those, like Helen, at the lowest rungs of authority. It was the Inspectors General, the Assistant Secretaries of Finance, the Deputy Administrators of Trade, and so on, who did the real work. They needed, as the now archaic phrase went, their beauty sleep.

But rest was denied Helen Dubrovnik. A sickening feeling, brought on by reviewing the latest telemetry from Station 9/T-25/Galileo Sector, had kept her up all through the previous night.

Worst of all, the readings coincided with a single section of the crew quarters. In the absence of data recording a hull breach either from incoming asteroids or stray weapons fire, the “irregularities” pointed in a sinister direction.

Some people were deliberately exposed to radiation, thought Helen.

She bit her finger nails and scrolled through every screen of the report she’d received from Admin. There were no reports of death or illness — in fact, no medical log at all. She reached for her comlink and called out to her assistant.

“Roger,” she said. “Dubrovnik here. Why didn’t you tell me that we received no medical records from 9/T-25 before we left base?”

“What I did tell you, Inspector,” said Roger, “was that the medical records were sealed. No explanation. I asked and got my head handed to me by the station’s AI. Did you know Ais handle adjudication now?”

“Sounds like a circuit overload,” she said. “Dubrovnik out.”

Sealed medical records and a space station AI with an attitude? This was so out of the ordinary, Helen was surprised not to have received a higher-level mission brief. Still, she’d been in the Service long enough not to inquire. In the command and control culture of InterstellarOne “asking questions” was equated with “being incompetent.” She’d have to make do with the data at hand. Everything else was, she was sure, on a need to know basis.

But what, she wondered, would she wish she knew, if this suspicious situation turned ugly? Brett Thomson, the Bright Star’s Com Officer broke in on her thoughts. As always, his high tenor voice grated on her nerves.

“An encrypted call for you, Inspector,” said Brett. “Shall I put it through?”

But Brett explained that the “From” field on the transmission was also encrypted — and the message wasn’t even on a standard InterstellarOne frequency. Helen told him to put it through and was alarmed by an initial burst of jagged static.

The comlink went dead. Helen shuddered. The voice was familiar: her ex-husband Dolan Garraway. But what would he be doing out in deep space on a dreary space station? He’d been a renowned restaruanteur when they were married. Unfortunately, the time to ponder Dolan’s fate came to an abrupt halt when Roger burst into her quarters, his dark face contorted with fear.

“Inspector “ he said. “It’s … it’s Captain Hayes. She just changed course, and then … and then slumped over.”

“The strange part is,” said Roger, “she insisted her orders came from you.”