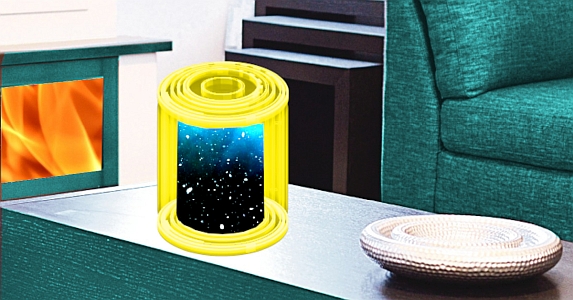 Terrified as she was, Helen made a split-second decision. Because the multidimensional being could find her anywhere in space or time, she stood her ground — despite Roger’s whispered pleas to the contrary. She squared her shoulders and looked her own simulacrum in the eyes.

“You’re not welcome here,” she said. “You’ve no right to interfere.”

Her stomach turned as, momentarily, the simulacrum twisted out of alignment before snapping back into place.

“I have the right of power.” she said. “You are the unwelcome ones. I’ve tolerated your squatting in this region of space-time for millions of cycles. And I’ve decided to call a halt. All of these resources, wasted on fools.”

“And what will you do with our universe?” asked Helen. “Feed on it? You must have easier ways to gorge yourself. Supposedly, there are limitless uninhabited universes. Why not gobble down one of those? No pesky lifeforms to get in your way.”

“Very true,” she said. “I could go elsewhere. But what fun is consuming nothing but matter and energy? This universe, with lots of sentients scurrying around? Delicious. The misery, the ecstasy! Psychic energy, you dreary lump of biomass, is the most volatile force in the cosmos. Yet you squelch it whenever it shakes your tiny minds. Such a waste. Now it will all be mine!”

Usually cautious, Helen saw this was one time when her only hope was to be bold.

“Not much use to you if we’re dead, are we?” she said. “If you gobble us up, we can’t do a thing for you. It would be like farmers burning their own silos.”

“Are you attempting to bargain? With me?” said the simulacrum.

Helen’s fist clenched as the creature’s cackling laughter filled her ears again. For his part, Roger had crawled into the far corner of the conference room to weep. Helen knew this was her last chance to save him. She grabbed a small end table and through it at the simulacrum’s head.

“You want drama?” she screamed. “Deal with that. And this!”

A floor lamp, close at hand, met a similar fate as the end table.

“Try getting that out of me when I’m dead, you idiot,” she said.

“The simulacrum froze, then dissipated into a cloud of blue smoke, shot through with flashes of electrostatic charge. She spoke again, in a monotone.

Helen grabbed a small desk chair and held it over her head.

“Stop it,” said the creature. “You’ve made your point. Here is what I would require to bypass this universe.”

“Helen listened to the multidimensional being’s disturbing proposal. If Helen could arrange for every household in the human and Jolhadrian spheres to allow her unfettered, silent access, she could sustain herself on the emotional ups and downs of their everyday lives.

“I can’t promise not to stir things up if I get bored,” said the creature. “You’ll have to put up with an increase in crime, and a spare war or two, nothing you fools haven’t indulged in for thousands of cycles.”

“That sounds … reasonable,” said Helen. “But I’ll have to twist some arms — and find some way to sell it.”

“I’ll give you one of your so-called ‘arcs’ to make this work,” said the creature. “After that … well you know what’s next.”

The smoky cloud disappeared. Helen rushed to comfort Roger and, with nothing to lose, abandoned her mission and returned to the Brighter Star. In no time, she contacted GGB Central Admin.

Though Helen’s story sounded implausible, the corroboration provided by SubCommander Lentrechi of the Jolhadrian Empire, lent it enough weight, eventually, to be taken seriously. With only two weeks to go, the GGB Board of Advisors finally took the matter in hand. They called in experts from every discipline and, at last, a solution came from the most unexpected source. A historian delivered a presentation about an ancient Earth custom, dating back fifteen hundred years.

“It was a primitive, network-activated device,” said the historian, “that a tech company sold by the millions to affluent citizens. It not only searched for data, as requested, but listened in on their conversations, so as to suggest items or services to purchase.”

“What a grotesque breach of privacy,” said a senior Board member. And yet, the parallel was clear. If they revived this practice, the multidimensional being could inhabit or embody this intrusive sales device and slake its need for psychic energy by listening in on each “customer’s” daily life.

“Can’t believe we’re about to unleash this plague on our own people,” said the GGB’s Chief Administrator, when the plan was described to her. And yet, considering the alternative….

So it was that long after human kind had relegated its origin world to museum status, humans, Jolhadi and countless other societies were spared total destruction by a tiny, annoying little voice. It came from a glowing cylinder, perched on a shelf or table top in trillions of private homes.