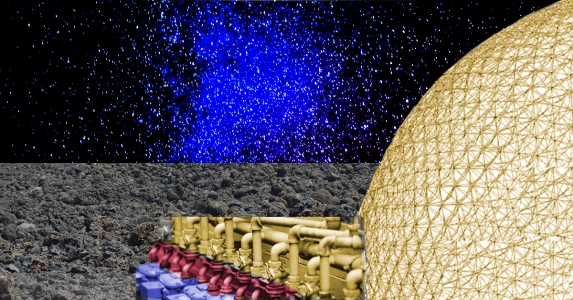 Hahlyk scowled at her instrument panel. For the third time in as many hours, the air quality inside the main dome was substandard.

“Makes no sense,” she said. Every diagnostic she’d run showed no hint of malfunction. Or was there a bug in the diagnostic system? Her helplessness was driving her crazy. If life support degenerated any further ģ but maybe it was too soon to panic. She grabbed her dark green comlink

“Get me Engineering,” she said. No way she’d handle this headache on her own. Being Director of Environmentals on Kyratho’s first extrasolar colony was, literally, no walk in the park. And unless the air quality improved. they’d never have so much as a blade of grass. The lush recreational areas, suitable for gaming, picnics and traditional outdoor weddings that the Consay had envisioned would never come to life.

After hunching over her equipment banks the entire morning, Hahlyk took a moment to stretch her long back. “Long,” that is, by Earth standards. Hahlyk and the residents of Kyratho, her homeworld, had their own idea of what a normal humanoid body should look like. Their word for themselves was “kyrathoid,” and it was clear that her species had followed a slightly different evolutionary path from homo sapiens.

All told, the two species were remarkably similar, despite having evolved hundreds of light years from each other. From a distance, only Hahlyk’s boney, “cubisticö skull might have made her stand out in a crowded human cityscape. But when a pair of engineers showed up at her threshold, her skull didn’t stop her from greeting them with recognizably “humanö impatience.

“Did you miss the ‘urgent’ flag on my comstream?” she asked. “Never mind. What have you found?”

Jelhoryk, the Lead Engineer, tossed a wave of black hair off her broad forehead.

“The air scrubbers are in perfect working order,” she said. “That’s the problem.”

Hahlyk stamped a shiny black shoe into her office floor.

“Could you at least try to make sense?” she shouted.

“Let me explain,” said Jelhoryk’s assistant, Tholtrevin. “The scrubbers are performing up to specifications. They’re just not the ones we installed.”

“So you suspect vandalism?” asked Hahlyk. “But who would do that?”

“It’s not like that, Director,” she said. “There are no tool marks, and no residual traces, like metal filings, from any repair work. It’s as if those units have always been there.”

“Can’t believe what I’m hearing.” she said. “Can you replace the units? Well? I expect an answer!”

“That’s the thing, Director,” said Tholtrevin, “we did. An hour later, they ģ they changed back.”

“What?” said Hahlyk. “Great stars, the life support system is worse than I thought. It’s spewing out hallucinogens.”

The sound of a mechanical contrivance clanking in the corridor outside Hahlyk’s office made the three of them turn their heads. It was the dome’s Letyka-class artificial intelligence, embedded in a mobile unit that walked on four legs like an overgrown dog.

“If I may interrupt,” it said. “Engineers Jelhoryk and Tholtrevin have suffered no impairment of the visual cortex. The dilemma they describe appears to be the result of an intermetaversal rift. According to sensorsģ.”

“Stop right there,” said Hahlyk. “You’re saying these air scrubbers have crossed over from a parallel universe?”

“As expressed in plain language,” said KerLetyka, “that is a valid approximation. In mathematical termsģ.”

“Stop it!” shrieked Hahlyk. “Stop describing the problem. If we don’t solve this, we won’t be breathing much longer.”

“It’s worse than that,” said Jelhoryk. “Sections of the dome have already been replaced, too, with ģ well, we’re not sure what it’s made of.”

Hahlyk grabbed for her comlink.

A quiet sob met her ears, followed by a trembling voice.

“I can’t, Director Hahlyk,” said Olxnevon. “Commodore Zalynk has ģ he’s been replaced by a small yellow lizard. It’s sitting in his chair. Shall I ģ shall I put it on?”