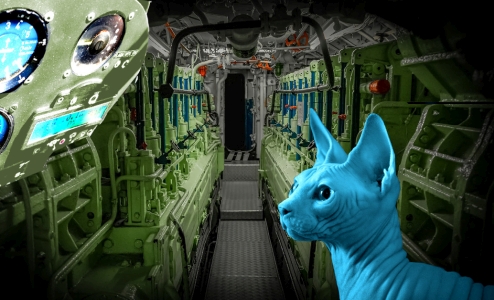 With Commodore Zalynk missing, due to a bizarre case of metaversal instability, the logical thing was to track down Vice Commodore Larlynch.

“Where the crackling ionosphere is she?” asked Hahlyk.

The answer was alarming. The Vice Commodore, overly fond of Neklynese brandy, was sleeping it off in her quarters. Because the rest of the colony’s project team was too inexperienced to handle the crisis Hahlyk knew she’d have to take charge herself.

“If you can’t remove those alien air scrubbers,” she asked Lead Engineer Jelhoryk. “can you adjust them to the right tolerances for our dome?”

“We can’t read the calibrations,” said Jelhoryk. “They’re in an alien language.”

“What about that Exolinguist that the Comsay made us bring?” she asked.

“Everything’s a little odd,” said Hahlyk. “Go find him before one of you disappears, too.”

Jelhoryk nudged Tholtrevin gently toward the door. Hahlyk glared at KerLetyka, the android who’d lurched into her office a few minutes earlier.

“And you, you big lunk,” she said. “Figure out how we can stop this process.”

“The process cannot be stopped,” said KerLetyka, “because it is not a process. It simply is.”

“Sun spots,” said Hahlyk. “If I’d wanted mysticism, I would have called in a Spirit Guide. “I will explain further,” said the android. “The metaversal instability has not been generated by an external force. It is a permanent feature of this sector.”

Hahlyk walked behind her carbon-composite desk and sat in her dark red swivel chair.

“But we’ve been on this moon for a half rev,” she said. “Wouldn’t we have noticed the instability by now?”

“Half a rev ago,” said KerLetyka, “this moon was in a different position relative to the instability. We are now positioned directly in its center.”

“But that sounds like you already knew about the instability,” said Hahlyk, “Why didn’t you report it?”

As it happened, KerLetyka had been activated only the day before, in time for the second phase of colonial construction. For its part, the colony’s Core IA was designed for monitoring and maintenance, not scientific investigation.

“If you had requested a search for instabilities, we would have complied,” said KerLetyka. “Otherwise, we assumed that the Commodore was aware of the phenomenon and wished to analyze it.”

Hahlyk sank lower into her chair and wished that she, too, could get her hands on some Neklynese brandy.

Meanwhile, in Engineering, Exolinguistics expert Phonyx was having words with the two lead operatives.

“It doesn’t work like that,” he said. “My methods involve a bit of trial and error.”

“And this is a science how?” asked Jelhoryk.

Phonyx pointed to the markings around the air scrubber’s central dial.

“Drawing on general notation theory,” he said, “I assume these are numerals, in a Base 10 system.”

“Base 10?” asked Tholtrevin. “How archaic. We switched to Base 8 three hundred revs ago.”

“Now, my boy,” said Phonyx. “Cultural bias is a major obstacle to scientific insight. See that character? It would be entirely consistent if it were the symbol for ‘one,’ and if this character at the other end of the dial stood for ‘ten.’”

“Hold on,” said Jelhoryk. “If this is the dial for atmospheric pressure, then it’s set at ‘eight’ - exactly what Director Hahlyk reported. So if we adjusted it down to ‘six’ … there.”

She checked the result on a hand held scanner.

“Atmospheric pressure dropping,” she said. “But why is the system pumping out so much nitrogen?”

“Well,” said Phonyx, “what if this device came from a world with higher nitrogen levels than Kyratho?”

“Maybe,” said Tholtrevin. “But if we keep guessing, we could asphyxiate the entire colony. What about that inscription down in the lower right corner? Is it a general legend?”

Phonyx pointed to the small, blue four-legged android at his side, that had been staring intently at the alien device the whole time.

“Maybe DalRontyki can help,” he said. “This little guy has analyzed symbols from millions of worlds. What do you think, DalRontyki?”

The android piped up in a fluty voice.

“Note the larger initial character on the last word in the sequence,” it said. “That suggests either a personal name or a place name. Given the context, I’ll wager that the latter and that the word preceding it is a preposition. If we assume that the first word is a verb, I might plausibly conclude that the sequence identifies the air scrubber’s place of origin.”

“Any idea what it means?” he asked.

“Perhaps,” said the android. “Late yesterday, your quantum tablet was replaced by an alien one that was playing a holovid. I accidentally engaged the subtitle function and captured a large percentage of the alien vocabulary before the device ran out of charge. The characters in the subtitles were much like these.”

“I believe,” said DalRontyki, “that the phrase on this device reads ‘Made in China.’”