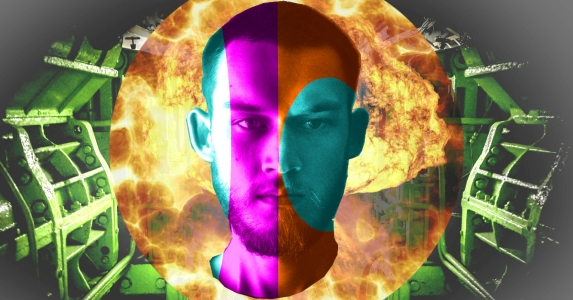 Across the entire Kyrathoid colony, the metaversal instability continued to replace objects and personnel at an alarming rate. As sad as these losses were, there was one glimmer of hope. The instability delivered a humanoid from the same world that the alien air scrubbers had come from.

“He calls himself ‘Bradwilliamson’,” said Hahlyk. “Can’t believe the translation grid could process that.”

“But does he know anything?” asked Hahlyk.

As it turned out, Brad had been studying the instability from his side of the metaversal divide. As a sure sign of the colonists’ desperation, they overcame their revulsion and invited Brad into the main dome’s conference room for a chat.

“Look at that skull,” whispered Tholtrevin.

“And that outfit,” whispered Jelhoryk.

“Not to mention the smell” said Hahlyk.

Besides, Brad Williamson, from planet Earth, was about fifteen percent larger than the average kyrathoid. It was all he could do to squeeze himself into his assigned chair.

“Thank you, Bradwilliamson,” she said, “for meeting with us so soon after the … after the incident.”

The visitor did something peculiar with his mouth. its corners rose up on either side in a gesture no kyrathoid had seen before.

“Not at all, Ma’am,” he said. “Happy to help. We’ve been studying the instability for several weeks. In our universe it occurs in the midst of a minor asteroid belt, so we haven’t suffered the losses I gather you have … until now.”

“So have you seen our Commodore?” asked Larlynch. “He was replaced with a small lizard. Do you have such creatures on your expedition?”

The human shook his head and explained that the instability wasn’t simply a two-way street. Anyone with the bad luck to “fall in,” might exit to an infinite number of universes.

“The most we can determine is that every universe has a unique signal pattern,” said Brad.

Theoretically, he told them, if he went back into the instability with the right sort of equipment, he could detect his universe and try to lean in its direction.

“Sounds insane,” said Jelhoryk. “How could you possibly have time?”

“Time is suspended inside the instability,” said Brad. “Some of your colonists might still be wandering about in there, looking for an exit — or waiting for one to engulf them.”

“Can’t we do anything?” asked Hahlyk.

The answer was mixed. Brad believed that the instability had a narrow scope.

“If you could boost the orbit of this moon,” he said, “or lower it, you could avoid it entirely.”

But as everybody acknowledged, either proposal came with risks. Too high an orbit could make the moon break free of its planet, and possibly cause it to shatter. Too low and orbit and the colony might eventually crash into the barren planet below.

“The only other option is local isolation,” said Brad. “If we can figure out where the instability’s epicenter intersects with your colony, you could evacuate that area until the moon passes out of range.”

Vice Commodore Larlynch stared at her fellow colonists and shrugged.

“That means relocating the main dome,” she said. “That’s where all the replacements have happened. It would mean starting over.”

“It’s not like we’re making progress now,” said Hahlyk. “We just barely escaped poisoning ourselves with those alien air scrubbers. No offence, Bradwilliamson.”

“That’s OK,” said Brad. “I’m intrigued that two items, including me, have crossed over from the same universe. Usually, the instability favors random distribution. But you said your air scrubbers were replaced twice by units from my universe in the same day.”

“More than twice,” said Jelhoryk. “It was practically instantaneous.”

“That probably means the Engineering department sits right at the nexus of the instability,” said Brad. “That’s where I popped in, too, remember?”

“We found you sleeping next to the microfusion pile,” said Tholtrevin.

“And what about the lizard that replaced him?” asked Hahlyk.

“She belongs to me.”

A tall, sinuous being materialized before them, whose shape refused to settle into a fixed form. Though at first he appeared as a bipedal organic lifeform, he soon transformed. First into a ball of fire, then into a block of titanium, and finally into a cloud of prismatic gas, before taking on a vaguely leonine appearance. His nasal voice grated on their nerves

“As does the adimensional parkland into which you have flagrantly trespassed,” he said. “I insist that you depart immediately.”

“Who the gyrating pulsar are you?” asked Hahlyk.

The rest of the humanoids stared, transfixed. Was he, they wondered, made of matter or energy?

“I am known as Ynthasis,” said the being. “And if you wish to see your comrades again, I advise you to take a more civil tone.”