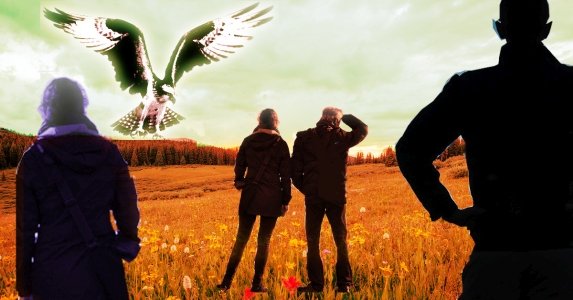 “What the flaming boson pie,” asked Hahlyk, “is ‘a-dimensional parkland?’”

Ynthasis reshaped himself to resemble a large, bottle-blue water beetle, yet somehow still managed to sneer.

“Typical primitives!” he said. “Just because you’ve started a ‘space program,’ you think you know what space-time is. There’s a lot more to the Cosmos than you realize.”

Ynthasis appeared to burst into flames.

“Idiot!” he roared. “Your limited senses make it seem as if my shape were fluid. I exist in multiple universes simultaneously and, I’ll have you know, outside of Time.”

The five kyrathoids and Brad shielded their eyes as the irate being rose to the dome’s high ceiling and appeared as a series of brilliant, small-scale fireworks, accompanied by the sound of rumbling thunder. When the display died down, Ynthasis reappeared as a miniature fruit tree growing out of the center of the conference room table. Jelhoryk swatted Tholtrevin’s hand away when he leaned over to pick one of the tree’s bright yellow globes.

“OK, we get it,” she said. “You’re the great and powerful Ynthasis and we’re the puny little fools. What do you want us to do about it? You’re the one with all the answers.”

“How about this?” said Ynthasis.

Hahlyk, Jelhoryk, Larlynch, Phonyx, Tholtrevin and Brad gasped. The main dome’s conference room appeared to dissipate and was instantly replaced by lush grasslands, which extended toward the horizon in every direction.

Vice Commodore Larlynch pulled herself up to her full height.

She was interrupted by deep, resonant laughter.

“You. Demand,” said Ynthasis. “That’s too funny. But please, no more anger. Isn’t this world more appealing than the inside of a gimcrack space dome?”

“He has a point,” said Tholtrevin.

“No, he does not,” she said. “We’ve been kidnapped. What about the rest of the team and our mission equipment? And how will we get word back to everyone we left behind on Kyratho?”

Ynthasis now hovered over them in the form of a huge, predatory bird.

“What part of ‘a-dimensional’ don’t you understand?” he asked. You can set up your colony right here with the same ticky-tacky communications array you had before. Then I’ll shift the orbit of that ugly little moon as I originally intended, so it can’t interfere with my plans.”

“What plans?” asked Brad. “You’ve never heard of real estate development?” said the apparently all-powerful being. “Cheer up! You’re getting in on the ground floor of a world-class interdimensional resort. Some of you would make excellent employees.”

“Doing what?” asked Hahlyk. “Washing windows? Besides, the whole reason we started a colony was to provide more space for our population. If they can’t even find this place, them we’ve broken our backs for nothing.”

The six captives watched as their host fluttered down to the ground and assumed the shape of an elderly humanoid, dressed in somber, gray robes. To Brad’s eyes, he looked as if he’d just stepped out of a Medieval painting from an Earthly museum. His voice was now surprisingly weary.

“Must you take the fun out of everything?” he asked. “Fine. You can have your moon back. Just give me a moment to rejigger local probability. Then it’ll be out of the way and you can go on with your pathetic lives. I thought maybe I’d encountered some sentients with a sense of adventure. But you’re just like all the rest.”

“I hate to interrupt … Sir,” said Brad, “But could you also drop me off at my probe ship in my universe? My girlfriend probably thinks I’m dead.”

“Why not?” he said. “Maybe I should give up my real estate venture and start a metaversal taxi service.”

“I don’t get it,” said Phonyx. “It’s not like sending us back is hard for you. Pretty soon, you’ll have no more annoying primitives underfoot. Isn’t that your idea of paradise?”

Ynthasis sighed and turned away from them.