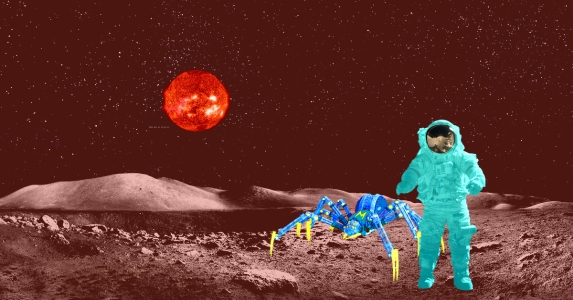 Day in and day out, the lunar construction business was a constant grind. Heavy-duty excavators cleared the surface rubble and dug the foundation, according to one of several government-approved templates. Next, teams of servicebots laid down plumbing, electricity, AI interface and a GalaxyNet connection. Finally, work on the super structure and its interior amenities began, supervised by an organic design team.

Armand DuBois ran one such construction concern way out on the fringes of the Tau Ceti galaxy. On a typical work day in 3067, he paused to gaze out over the starry horizon. His mind reeled as he tried to imagine how the engineers behind the first extra-solar construction projects had managed.

Back then, it was said, rudimentary Artificial Intelligence climbed a steep learning curve in each new scenario — despite millions of lines of code and terabytes of archived visual data. Plus, there were no replicators or extruders to help deal with emergency repair.

In a pinch, less vital equipment was cannibalized, and missing components were cobbled together from scraps. That is, until your primary systems seized up or burned out altogether. The alternative was an agonizing wait for a supply drone. Armand shook his head at the thought of how many of those earliest colonists had fallen ill when leaky air valves created a lush environment for airborne microbes.

In his mind, those first missions were Courage in action, taken by people who believed in an ideal. By contrast, his decidedly average construction business, which operated within a cubic light year at most, was just a job. Serving as the sole proprietor of Moonbeam, LLC hardly made him a hero.

But on this particular day, a chance occurrence bumped his destiny up a notch. For once he looked away from the horizon, his eyes came to rest on an unusual surface formation not ten meters from where he stood in his standard, Akimoto pressure suit.

“Weird-looking magma nodule,” he muttered into his helmet.

What Armand didn’t know about geology, let alone exogeology, could have filled fifty volumes of the “Encyclopedia Astronomica,” if the ungainly tome hadn’t ceased publication eight hundred years earlier. Lucky for him, he was just smart enough to know his limitations. Instead of guessing, he called out to one of two supervising AIs he took with him on every job.

The lithe android, a spidery affair with eight legs, raised its com-tennae and pointed them in his direction.

“Yeah, I know,” said Armand. “Get over here anyway. Don’t make me run a diagnostic on you.”

“Promises, promises,” said the AI. A minute later, it had clomped over the moon’s rugged surface to meet him. “I presume you want an analysis of the anomalous nodule to your right.”

“You knew about it?” asked Armand.

“Basically?” said the android. “I see everything. But we have a job to do.”

“Galaxies, Boss,” said the AI. “I was just pointing out that you need credits to operate this company and some of them go to recharging my power packs and replicating my replacement parts. See why I have a vested interest?”

The human smiled, in spite of himself. It was impossible to stay mad at an android, though he wasn’t a hundred percent sure that was a good thing.

“Long as we understand each other,” he said. “Is the object in question as unusual as it looks?”

“Then leave it alone,” said Armand. “Just transmit an image to Central so they can waste their own time on it.”

“Too late,” said M429. “Now that we’ve got its attention, the thing is ordering me to break it out of that nodule.”

“Can’t you say no?” asked Armand, then gasped as the android spun around and blasted the nodule with its forearm-mounted laser.

Within seconds a small red orb emerged from the rubble of the nodule, rose into the moon’s airless sky swelled to twice its size and emitted a fearsome glow. All thought of reprimand drained from the human’s mind as a snarling female voice echoed inside his helmet.

“Hey, cut it out, will ya?” said Armand. “You’re breaking my eardrums.”

And to his great surprise, Armand’s helmet filled with eerie, jovial laughter.