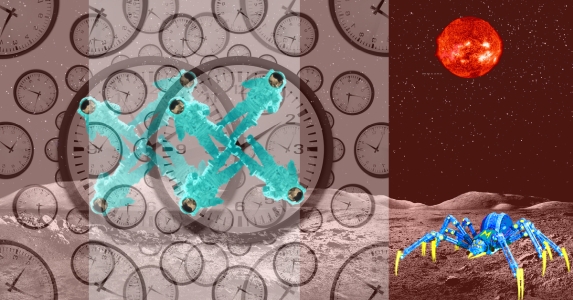 “The startled contractor’s puzzled expression was masked by the light bouncing off his helmet visor.

The female voice, which he assumed was coming from the glaring red ball that hovered directly overhead, spoke with a decided lilt.

“And completely under my control,” said the voice. “Right M?”

“But that’s just a precaution,” said the voice. “I’m known as Gleanant, and I exist to serve you.”

Armand shifted his weight on the moon’s arid surface.

“It’s a function of my programming,” said the alien AI. “You released me from my capsule. Therefore I must serve you.”

“M429, are you tracking this?” asked Armand. “I’ve never heard of an activation protocol like that.”

“Beats me,” said the android. “Occasionally, a malfunctioning android that’s essential enough gets reprogrammed to reduce its independence until a replacement arrives.”

“But why leave an android cooped up on a lunar surface for … how long is it, Gleanant?”

The hovering red sphere dimmed for a moment then flared up again.

“Based on your ship’s chronograph,” she said, “I’d say about a thousand cycles. It looks like they forgot about me.”

But as Gleanant explained, there was a gap in her data log.

“Ships have come and gone on this rock forever,” she said. “I must have been knocked around a bit.”

Armand had a sudden urge to scratch his head, until he remembered his helmet.

“OK, well, if you’re serious about serving me,” he said, “can you speed things up around here? I’m way behind schedule on this job.”

Too late. Armand was overwhelmed by a feeling of un-Earthly calm, which was quickly shattered by the realization that all of his machinery had ground to a halt.

“There,” said Gleanant. “Now tell me which devices you want to operate outside of Time.”

“Oh my,” said the alien contraption. “At this power level, an explanation would use up more subjective time than I can possibly suspend with my time dam. So which is it? Explanation or work?”

Shaken, Armand opted for work, with the proviso that Gleanant explain herself to M429 later.

“Oh I already get it,” said the spidery android, “and you’re not gonna like it.”

Armand stared out at the bizarre ballet of rapidly moving equipment that unfolded in front of him. As if in a stop-action nature film made centuries before he was born, the housing complex he’d been commissioned to build rose up in a comic frenzy. Comic, that is, if it hadn’t also been slightly terrifying.

Nevertheless, the work, when completed looked indistinguishable from normal and, a moment later, Armand experienced a strange sensation in the pit of his stomach.

“What my sourpuss of a colleague means,” said the alien android, “is that, of course, I didn’t use magic to get your workload caught up. The Laws of Physics are immutable, now aren’t they?”

“Guess so,” said Armand. “But why do I feel … weird … like my joints are stiffening up?”

“Physics,” said Gleanant. “I can’t make Time disappear. It’s like a big, unstoppable river. All I did was redirect it for a while.”

“To you, Boss,” said M429. “This thing reflected the flow of Time from this moon and bounced it off you. Sensors indicate you just aged forty years.”

“I aim to please,” said Gleanant.

“But … I’m not pleased,” Armand shouted. “I’m seventy-five now. What will my girlfriend say?”

“Guess I should have warned you,” said Gleanant. “My bad, as you humans say.”

“Correction,” said M429. “Humans haven’t said that for over a thousand cycles.”

“What does it even mean?” asked Armand.

“Yeah, like blurry vision,” said Armand. “Well, Gleanant, if you’re supposed to serve me, how about curing me?”

“Kind of ageist, aren’t we?” asked the alien. “What’s wrong? You were going to be older someday anyway. But all right, I’ve dealt with organic vanity before. What you need are the rejuvenation ponds of Dolnatri 4. What do you say?”

“Will they change me back?” asked Armand.

“Let’s find out, shall we?” were the last words the previously bored lunar contractor heard — before everything went black, his organic matter was transformed into tachyons and he was whisked across a vast swath of interstellar space.