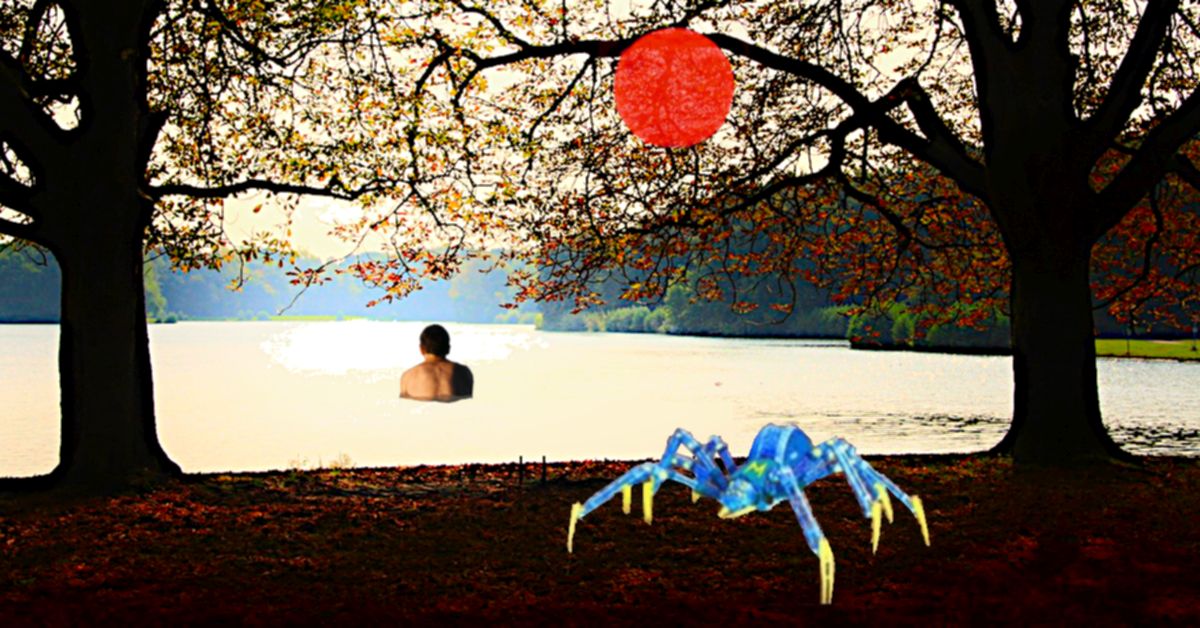 When Armand Dubois founded Moonbeam, LLC, it never occurred to him that one day he’d be standing, minus his pressure suit, on the surface of Dolnatri 4.

In fact, he’d never heard of Dolnatri 4, let alone the sentient arachnids who lived there, in utter harmony with its lush, nearly pristine ecosystem. And yet, there he was, with the alien AI’s chirpy voice ringing in his tormented mind.

“Sorry,” said Gleanant. “I had to leave your pressure suit behind. It was too much to factor into my transmat calculations. I assumed you’d rather have all your internal organs in tact.”

“Craters,” said Gleanant. “What is it about you humanoids and self-loathing?”

Armand kept his snappy comeback to himself. There was, after all, no point in trying to insult an android. Instead, he looked up at the glowing red sphere that hovered overhead.

“Where’s that rejuvenation pond you promised me?” he asked.

“Ten kilometers due east,” said Gleanant. “Step lively and we should make it there by mid-afternoon.”

“You brought me … what … fifteen parsecs so I could walk for hours … like this?” said Armand. “Couldn’t you have….”

“Goodness, what a whiney little ball of organic matter you are,” said Gleanant. “So what do you want, a ground car?”

“Yes,” said Armand. “And some clothes. Feels like we’re heading into fall on this planet.”

Gleanant’s voice had come as close to a petulant sulk as could be expected from an AI. It made Armand wonder at the civilization that would build such a device.

Regardless, he alien AI set to work and quickly extruded enough raw materials from the planet — to produce a small solar-powered flat-bed truck and a blue-grey jumpsuit, based on an image hovering in Armand’s mind. Soon he was dressed and sitting in the driver’s seat of the truck. His tired eyes gazed up at the rear view mirror to see M429 crawling into the truck bed behind him.

“Move out,” said Gleanant. The automated truck started up and Armand took in the planet’s unspoiled scenery.

“Beautiful,” he whispered. A trickle of hope entered his mind. With any luck, the rejuvenation ponds would restore him to his proper age. Soon enough, they entered a clearing and a large pond came into view.

“Last stop,” said Gleanant. “I’m afraid you’ll have to disrobe again before you enter the pond. I do hope that won’t be too traumatic for you.”

“If you’d been thinking,” snapped Armand, “you’d have talked me out of opening Gleanant’s casing.” The glowing orb above him grew paler and dipped a bit closer to the ground.

Over M429’s protests, the aging human limped over to the pond’s edge and submerged himself in its clear waters. Hours later, he re-emerged, reinvigorated.

“Wow, I feel great!” he shouted. “But how did I ever hold my breath that long?”

“Boss,” it said, “I think you should check out your reflection in the pond.”

Just then, a contingent of twelve Dolnatrids crept out of the surrounding forest and stepped forward. Though distinctly arachnid, Evolution had granted them the power of speech. Gleanant translated their reedy language and piped it into Armand’s mind.

“Welcome, Brother,” they said in unison. “You have been reborn. Let us teach you the ways of your people.”

“My … my people?” asked Armand. He spun around and took M429’s advice. Reflected in the pond was his new arachnoid body.

“What have you done to me?” he shouted at Gleanant.

“You didn’t hear me say I wanted to change species, did you?”

“Well, no,” said Gleanant. “OK, minor glitch. But don’t worry, the folks at the Rulzarian Genome Center in the Allelean Sector should be able to fix you up.”

“I dunno, Boss,” said the spidery M429. “Maybe you should quit while you’re ahead. You look pretty good to me.”

Armand wanted to shake his head, but his new anatomy made that impossible.

Before he could complete his thought, the former human was once again whisked across the cosmos by a powerful, if somewhat erratic alien force.